When I tell people I am serving on the ALSC Budget Committee (my two-year term ends June 2019), they often respond with a “whoa” or “yikes” and say “that must be taxing.” I have to admit that when former Budget committee member Carolyn Phelan approached me about serving, visions of calculators, enormous spreadsheets, and perplexing figures that do not add up filled my brain. What if I messed up one of the ledgers? What if I botched the balance sheets? I imagined tackling scenarios like the one described in this rather hilarious letter ALSC’s amazing Executive Director Aimee Strittmatter discovered at the ALA Archives and shared with our current Fiscal Officer, the great Paula Holmes: 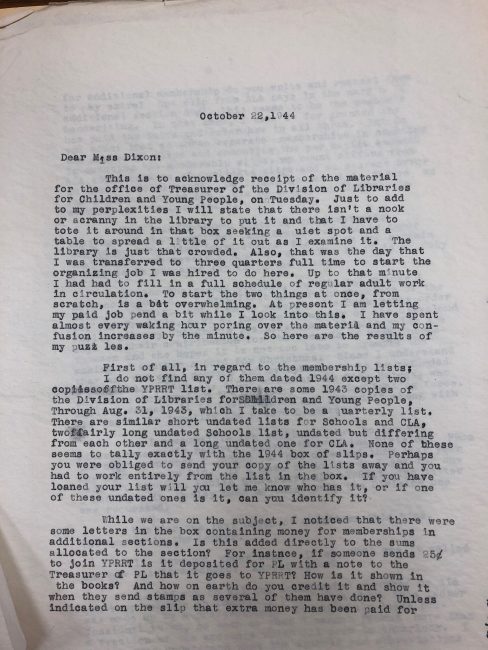 Deep breaths, Brian. Carolyn reassured me that examining spreadsheets would be involved, but that it’s actually Aimee who creates and maintains them. In his informative February 3 ALSC Blog post, fellow Budget Committee member Matt McLain does a beautiful job explaining the make-up of the committee and discusses the pros of serving.

I wondered if other former ALSC Budget committee members shared my initial concerns. Kathy Jarombek said in an email response to me, “my reaction was exactly the same! ‘Whoa! Crunching numbers isn’t really my thing!’ But that’s not what it’s all about at all! It’s about learning how ALSC allocates its funds and making recommendations to the board about how that should happen. I found it fascinating.” Christopher Brown agrees: “I learned how ALSC finds funding, how the Banquet at Annual DOES NOT pay for itself and how ALSC (literally) puts its money where it’s mouth is. There’s a lot going on beyond the sessions and the roundtables.” Christopher then shared a list of some highlights of when he was on budget, including the contribution of funds to the Children in Crisis Project, providing funds to support early literacy initiatives such like DIA, and awarding scholarships so librarians could attend conferences.

Susan Dove Lempke writes “…in Budget you get a good view into where the association is going and what they/we are trying to accomplish.” Carolyn Phelan talks about how she helped update the Children’s Library Service Endowment Flyer and enjoyed “identifying ALSC award winners and honors that would either be made into movies released the following year or would appear on next years’ reading lists for state book awards.” These latter tasks (along with identifying anniversary editions of awards books) help gauge seals sales. Kathy jokes about getting the “inside scoop” about the seals: it’s seals as in 028.7, not 599.7.

My personal experience on the Budget Committee has been rewarding (one of my major tasks, like Carolyn, is to examine state book awards lists). I have learned so much about the inner-workings of ALSC. When I don’t completely understand the jargon, people have been remarkably helpful. And I have been thanked so much for serving. It’s great being part of a committee that does such beneficial things. Christopher says, “Seriously. It’s awesome. Tell them I sent you.” And Susan praises “the people you meet, who by and large are very knowledgeable and thoughtful.”

I echo their sentiments.

Guest blogger Brian E. Wilson works at the Evanston Public Library. He has served on the 2015 Odyssey Committee, the 2017 Caldecott Committee, and currently sits on the ALSC Budget Committee, He wishes to thank the Budget Committee for their guidance and support, and Christopher Brown, Paula Holmes, Kathy Jarombek, Susan Dove Lempke, Carolyn Phelan, and Aimee Strittmatter for their contributions to this blog entry. And special thanks to Andrew Medlar for his help as well.

This blog post relates to ALSC Core Competency of Administrative and Management Skills.