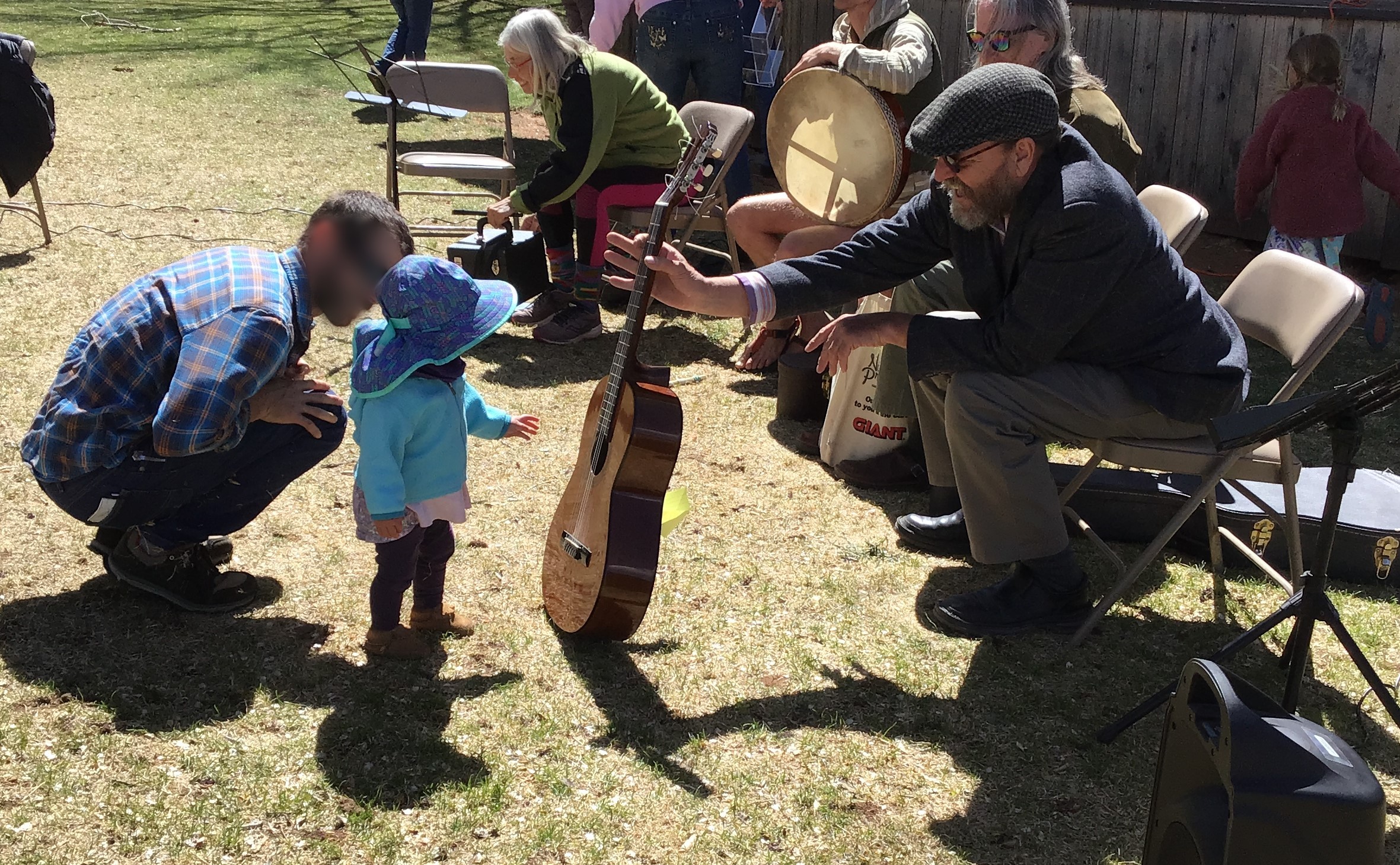 In January 2018 Grand County Public Library in Moab, UT offered our first Musical Story Hour in partnership with the Moab Music Festival (MMF).  MMF is an award winning non-profit that brings chamber music, jazz, and traditional music concerts to our small, rural, and geographically isolated town.  Four times a year the library teams up with MMF to present a special Musical Story Hour featuring a new musical artist(s).  Musical Story Hour has been one of our library’s most consistent programs since 2018; it was one of our library’s first programs to transition to an online offering during the pandemic.  In 2022 our first story hour in January was recorded and posted as a Facebook Premier and the other three were held at a public park.

Each Musical Story Hour begins by introducing that month’s musician(s) and this is usually followed by the musician(s) introducing participants to their instrument(s) and a short demonstration of how it is played.  Next we read a book with musical accompaniment, followed by additional songs and musical pieces to let participants get to know the instrument(s). Prior to the pandemic this was followed by a craft that was related to that month’s instrument. For in-person story hours at the library or at the park we encourage families to come up after the program for an instrument petting zoo. Families can visit with the musician(s) and touch, or hold, and sometimes play the instruments.  While the story hours were online and at the park, we have been offering craft to-go bags.

My favorite in person Musical Story Hour moments include the trumpet and tuba players with the trumpet craft and the musical parade through the library led by the musical artists.  The Taiko Drummers who brought enough small drums so that children could take turns playing along, and the concertina player and the accordian craft that allowed the children to “play” along with songs after making the craft.  The online Musical Story Hours during the pandemic were also special in their own way, MMF has relationships with world class musicians across the country and the online format allowed these amazing musicians to record themselves in their own homes from places like Portland, OR and New York City.  Some of these musicians had their children who are also musicians accompany them and that was lovely to watch and a great opportunity for our community’s children to see musicians their own age perform.

This partnership between our public library and MMF has greatly benefited our community and allowed both organizations to better reach their organizational goals.  MMF contributes their musical expertise and connections to select and hire musicians.  MMF also writes grants and obtains funding to pay the musicians.  The library provides a free venue, assistance selecting story hour books, crafts to accompany the story hour, and we handle the majority of the publicity.  Our partnership with this non-profit music festival has resulted in very high quality, well attended library programs.

I encourage librarians to reach out to music festivals in their communities if they are interested in a similar program.  Our next musical story hour will be in February 2023 and will coincide with MMF’s Winterlude concert series.  The world class award winning classical musicians who will be coming from across the country to perform evening concerts for adults will also be performing a Saturday morning Musical Story Hour for our community’s children.

Adrea Lund serves as the Head of Children and Teen Services at the Grand County Public Library in Moab, UT.  Please note that as a guest post, the views expressed here do not represent the official position of ALA or ALSC.

This blog relates to ALSC Core Competencies of III. Programming Skills and V. Outreach and Advocacy