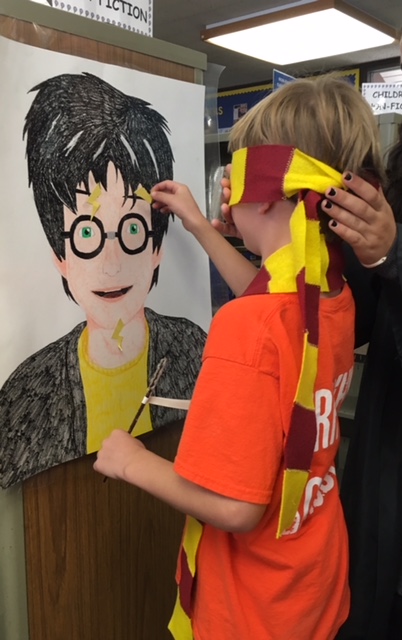 This summer marks the 20th anniversary of the U.S. printing of Harry Potter and the Sorcerer’s Stone, and what better day to celebrate this anniversary than on July 31, Harry’s birthday! These past few summers, my library has celebrated Harry Potter by throwing a special event complete with wands, scarves, and other fun activities. Every year we look at ways to improve our party, and this year is no exception. With limited space and staff, here is a run down of our last year’s celebration.

Every year, staff dress in costume of some sort, whether they are a character or a prefect. Most of our staff donned a graduation gown in either red, yellow, green, or black, but we’ve also had characters such as Dolores Umbridge who has taught the potions class for the past two years. We recruited a couple of teen volunteers to help run a few of our stations, and the rest was run by library staff. We did so much to prepare for this event. We enlisted the help of one of our Friends’ members who made about 80 Gryffindor scarves prior to the party, one for every child who attended. These were handed to the kids as they approached the first station, right outside our Children’s room.

Station 1: The Sorting Hat and wands

Alright, it wasn’t exactly a sorting hat, but rather a sorting bag. We pre-made about 80 wands that “chose” the kids and placed them in their house. Once the kids pulled a wand out of the bag, we gave a cheer, congratulated them on their house, and sent them on to the next station. We didn’t have enough staff to actually put them in a house, but we wanted to have something to recognize the four houses regardless. The children’s excitement was off the charts!

Immediately after receiving their wands, kids were funneled to this station. We made a cutout prop of an Azkaban Wanted poster and hung it from the ceiling. Kids stood behind it either holding props of cut out frogs, owls, or cats, or they just mugged for the camera. This was a very popular station and the parents loved the throwback to the Polaroid film. We had stapled the flagstone corrugated paper to a library wall earlier in the day as our backdrop. The effect actually worked out really well.

Station 3: Pin the scar on Harry

We created our own version of Pin the Tail on the Donkey, only instead it was pin the scar on Harry. A volunteer created a Harry Potter poster that we taped up on the end of one of our book shelves. Our volunteer Prefect tied a scarf around the children’s eyes, turned them around a couple of times, and let them try to “pin” the scar on Harry’s forehead. This was relatively simple to do and the kids had a lot of fun with it. 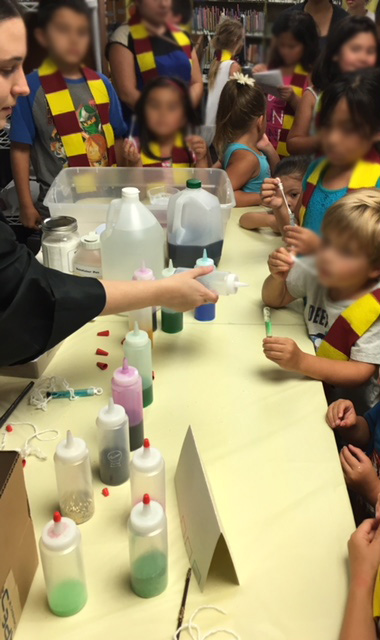 The professor staffing this station started out by doing a demonstration of elephant toothpaste. After the demo, the teaching assistant helped the kids create their own simple “potion” to take home: bubble juice, choice of food coloring, and their choice of either gold or silver glitter.  The kids absolutely loved this station, by far the most popular table.

Staff pre-made the “snitches” by gluing a small cut out of paper wings on the top of the candy. The same staff person who was in charge of the wands at the beginning of the program was the same person who handed a snitch to each kid who finished the circuit. By this time, every kid was delirious with excitement, and the parents were just as excited as the kids saying, “I can’t wait to see what you guys do next year!” Yeah, me too!

Today’s guest blogger is Michelle Coxford. Michelle is a Regional Children’s Librarian at the Stanislaus County Public Library system and am based out of the Turlock Library Branch in Turlock, California.  When I’m not stressing out over program planning, I’m trying to figure out a way to work classic rock music into my story time program.