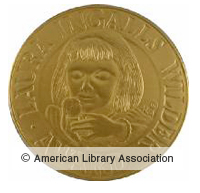 Like many of you, I look forward every year to the announcement of the Youth Media Awards. One of the special moments during that early morning in January is hearing names of authors and illustrators who have been changing children’s lives with their books for many years. I stood and cheered in Atlanta last month for the announcement of Nikki Grimes as winner of the 2017 Laura Ingalls Wilder Award, and now I am excited to ask for the help of ASLC members as we consider authors and illustrators for the 2018 Award.

Take a look at the list of past winners of the Wilder Award – is there an author or illustrator who you think especially deserves to have their name on that list? Someone you’re astonished to see has not already been honored, or maybe someone whose contributions to children’s literature you feel are consistently overlooked? All personal members of ALSC are invited to suggest candidates to the 2018 Laura Ingalls Wilder Award committee. We are excited to hear your voice!

The Laura Ingalls Wilder Award is given to an author or illustrator whose books, published in the United States, have made …a substantial and lasting contribution to literature for children. More information about the award and eligibility is available on ALSC’s site.

If you’re already an ALSC member, please send your recommendations of authors and illustrators to Rita Auerbach at rita.auerbach@rcn.com by April 15th, 2017. The award will be announced at the Youth Media Awards press conference during the ALA Midwinter Meeting in February, 2018. Not an ALSC member? Learn more about what ALSC does, the many benefits of being a member, and how you can join right here.

Today’s guest post was written by Laura Koenig. Laura is a Children’s Services Team Leader at the Central Library of the Boston Public Library and a member of the Laura Ingalls Wilder Award committee.