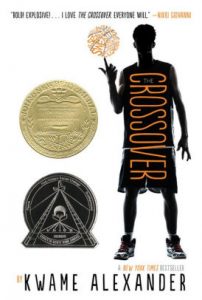 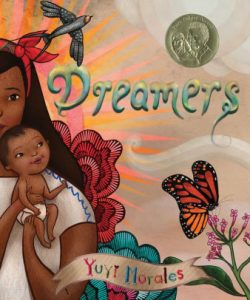 For the past dozen years, KPBS, the local San Diego PBS affiliate, in conjunction with the San Diego Public Library, the San Diego County Library, and other community partners has sponsored the popular community reading program One Book, One San Diego.  In the past several years, the program has expanded to include books for teens, for kids, and a Spanish language title for adults on both sides of the border.

This past year, after meeting several times, the selection committee for kids and teens chose Dreamers by Yuyi Morales and The Crossover by Kwame Alexander, respectively.  It didn’t hurt that both titles were also available in Spanish language editions.  The latter was also available as a graphic novel; each previous teen book choice had been a graphic novel, so that allowed the streak to continue, in a manner of speaking.

All choices were announced at the second annual Festival of Books on August 24 at Liberty Station and dozens of public library programs were planned and coordinated around these books in preparation for author visits. There were a half dozen events for The Crossover, ranging from book discussion to poetry activities.  They culminated with Kwame Alexander’s visit to Wilson Middle School on October 23, while there were thirty events celebrating Dreamers, most of which featured storytimes, crafts, activities, and snacks. Yuyi Morales will visit the San Ysidro Public Library branch on Saturday, December 7th .

One Book, One San Diego is a very successful partnership between public television, public libraries, and other local organizations promoting literacy. The grand scale of the project may seem intimidating, but the key is to recruit partners, define roles, organize events, and reflect and improve future iterations.

Jonathan Hunt is the Coordinator of Library Media Services at the San Diego County Office of Education. He is a member of the Building Partnerships Committee and can be reached at jonathan.hunt@sdcoe.net.