When I first began as the Children’s and Teen Librarian at a small, rural library in Tennessee, I felt a bit overwhelmed. It wasn’t planning storytimes and programs for the littles that felt dauting. What felt like the most challenging area for me was planning programs for a group of kids that were not quite children anymore but not teenagers yet, either. Add to that the compounded problem of lack of attendance. I was informed that a great group of tweens lived in and around the area, but getting them in the library had up to this point been a challenge. It was up to me to get the ball rolling.  Insert a big “gulp.”  I started by scouring the internet and turned on my listening ears. I began talking to every tween that walked into our building.

A previous supervisor suggested that we throw spaghetti at the wall and see what sticks. Since we already had a weekly program in place, I  started by featuring a different theme each week using crafts, art projects, and games. The entire staff talked up our programs and we advertised them in schools in the area. Eventually, our attendance began to grow and the need to expand our programming options did as well. 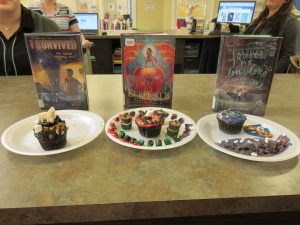 Our tweens expressed an interest in an Anime Club which we were happy to begin. We also created a maker space in the tween room for them so that they would have projects to complete after school when we didn’t have programs scheduled. Today, the tween program has gone from one singular program and one faithful attendee to having multiple programs a month with 8-10 regular attendees. My favorite program is a spin on the television show “Cupcake Wars” where I make sure I sprinkle in my own challenging twists and turns throughout the program which elicit an endless amount of heckling for weeks afterward.

I won’t tell you a tale. It was definitely a lot of hard work, a good deal of wishing, and there was a lot of spaghetti thrown against many walls. Spaghetti is still thrown at the walls on a monthly basis. But, as I said before, the return was certainly worth the effort. What is even better is the rapport I’ve had the opportunity to build with this great group of tweens. Out of all the programming I have done over the last few years, the one thing I have noticed is that even though they love coming to the library to do fun activities and see their friends, tweens want to be listened to even more.  Have you noticed your tweens today?

Do you have a favorite program for tweens?  Please share it here.

Kristen Briggs is a member of the School Age Programs and Service Committee.  She recently accepted a role as a Library Assistant at the Cherokee Public Library in Cherokee, Alabama.  She has a 17-month-old and absolutely adores children’s and young adult literature.