In libraries there seems to be a variety of programming options for toddlers and preschoolers. But the babies seem to mostly get left behind at storytime. I decided to make an effort to offer more types of programs for that age group and after stumbling across The Buckeye Librarian’s post about her baby prom program, I knew I had to try it!

I partnered up with a co-worker and we decided to incorporate it into our regular baby storytime rotation on a weekday morning at 10:30 a.m. We marketed the program for babies and toddlers from birth to age 3, but were pretty flexible if older kids wanted to come too. Everyone was encouraged to dress up, but it absolutely wasn’t mandatory in order to attend.

We had several activities to keep the babies nice and busy:

This took up half of our programming room and was one of the main features. We were lucky enough to procure a giant piece of bubble wrap from our Shipping & Receiving department, so we taped it to the middle of the floor. It ended up being the perfect dance floor. You could also use a storytime rug, a large piece of fabric, or you could tape down a bunch of different textured materials for a sensory dancing experience. We also had liquid sensory tiles (see the photo below) to tape down around the bubble wrap. A couple of LED party lights and a bubble machine rounded out our dancing area.

Halfway through the program, we brought out two big bags of balloons and dumped them in the middle of the dance floor, which was a definite hit.

I created a playlist of kid-friendly pop songs on Spotify with some Jim Gill and other children’s musicians sprinkled in. Then I hit shuffle and just let it play. 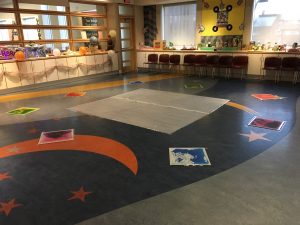 Because every prom has a refreshments table, we offered glazed donut holes (with it being a morning program and all), small oranges, water, and apple juice poured into a fancy dispenser borrowed from another coworker. 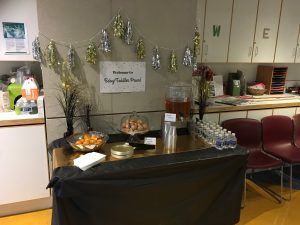 I really wanted something for the kids to make and take home, so what better than an instrument? We pre-stapled paper plates folded in half and let the kids decorate with markers and stickers. Then they filled them with a small scoop of beans and stapled them closed. Instant shakers! 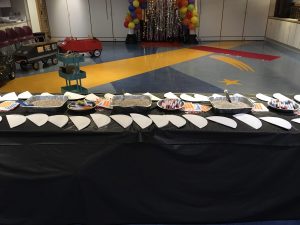 We borrowed three wagons from family and friends and used cardboard to decorate them like limos and sports cars. Then kids could ride around the other half of the room and pull up to the photo op area like a celebrity arriving at the red carpet. These were extremely popular and it didn’t get out of control with the parents pulling the kids around the room. 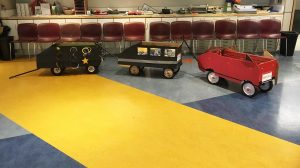 This took the longest for us to prep, but it was completely worth it. I had purchased a balloon arch kit from the party store (though you can totally make your own) and electric balloon pump (which was worth the investment when having to blow up 100 balloons for the arch alone).

We also used a metal backdrop frame (another great investment I’ve used in several programs) and plastic sheeting for the backdrop. You could also use fabric or shower curtains. Then we just spruced it up with lights and other decor to make it look more prom-like and taped a piece of red fabric to the floor as a red carpet. Families could take photos there until their heart’s content.

The original plan was to use a library iPad and email photos to the families. But with over 100 people in attendance, it was too busy to dedicate one staff member to just take photos the whole time. Next time, we might ask for an additional staff member to be stationed at this area to take photos if needed. We also might used a photo printer. 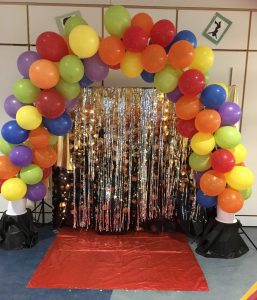 While there were a couple of things we spent some money on, such as the refreshments and the decorations, most of what we used were things that we either borrowed from others or already had laying around. The photo op area was used again for our Noon Years’ Eve program and will be used for our Preschool Prom program this coming spring. You can go as big and expensive or as small and thrifty as you want to. It was definitely worth the time, money, and effort to see that many babies, toddlers, and adults having a blast.

Kim Alberts is an Early Childhood/Intermediate Librarian at the Akron-Summit County Public Library in Ohio. She is writing this post for the Early Childhood Programs and Services Committee. If you have any questions, email her at kalberts@akronlibrary.org or Tweet her at @libraryladykim.