Four years ago, I was what one would call an extremely active ALA and ALSC member.  In addition being a full-time graduate student, I was a guest blogger for ALSC, served on the ALSC Intellectual Freedom Committee, and served on the GLBT-RT’s Stonewall Book Award Committee, and unsuccessfully attempted to manage an EMIERT committee.  I attended conferences, participated in listserv discussions–the works!

But then I got sick and I wasn’t able to attend Annual. And then, I had to step back from committee work, blogging, all of it. Personally, I found it disheartening and frustrating.  Over the past year, year and half, I’ve started to get involved again, but it’s difficult.  While I was healing networking and connections fell to the wayside, and I felt out of the loop.

Deciding to get back involved with ALSC and ALA was an easy decision for me.  I wasn’t sure how to restart, so I retraced my steps.  I reached out to the ALSC Blog to see if I could start writing again, I filled out the ALSC committee volunteer form, and most importantly, I started chiming in and asking questions on listserv’s and roundtables I am a member of.  And you know what? A beautiful thing happened. People responded.  They answered my questions, gave me advice and encouraged me to keep going.

I feel that all too often we are pitted against one another in society. Sometimes it seems that throughout the media and the world there is an us versus them, me versus you  mentality. This dichotomous view- a push to be the most successful or best anything causes us to stop seeing the humanity in one another.

Maybe I am the only one who sees things this way, but for me it was one of the things that made me fearful of asking others, what do I do?  So, as I slowly get reacquainted with ALSC and ALA, I say thank you- particularly to those who have provided insight and guidance along the way.

If you are looking to get involved- particularly in ALSC, I encourage you to take some of the same steps I did; fill out the volunteer form, hope you get off the waitlist for the Institute (that may be a just me thing), ask questions, but most importantly, don’t be intimidated.  At the end of the day, we all have the same goal  to engage children and their families. 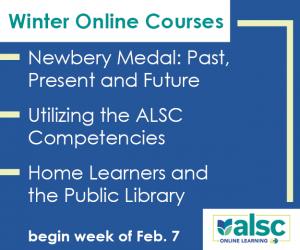