When the announcement that Hillary Clinton would be speaking during the closing session of ALA Annual 2017 librarians across the world exploded on social media and elsewhere, changing their flights and ensuring a packed house for the final session. And deliver she did with a thought provoking and inspiring speech on the importance of libraries. 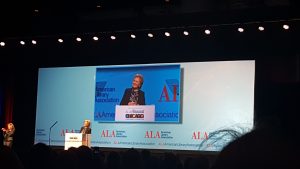 The audience began entering at 8 a.m. to what became a packed house. Music played throughout the waiting period, culminating with “We  are Family,” by Sister Sledge echoing through the ballroom and librarians dancing and clapping with the music. They were ready for Hillary.

Clinton discussed the three reasons we need libraries and librarians which were:

Clinton touched on her experiences using the library throughout life and on her upcoming picture book “It Takes a Village,” which is inspired by her 1996 adult title and will be published in September. Clinton said that she is most looking forward to sharing the book with her grandchildren.

She left to a standing ovation, inspiring librarians to continue the fight to defend truth with reason, evidence and facts.