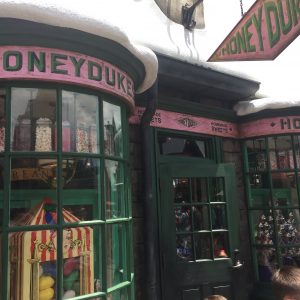 I admit to being one of the librarians who took advantage of the ALA conference being in Orlando and making the pilgrimage to the Wizarding World of Harry Potter. It was a Professional Development activity, honest it was. I did buy some souvenirs to give away as Summer Reading Prizes. But I also got some great ideas to add to my Harry Potter nights that I hold fairly regularly.

We hosted one of these Harry Potter nights on July 30, just before the release of the new book that everyone was so excited about. Now if you have read that book, you know it is a play, not a novel. The fact that it is a play has thrown some people off, but I embrace it — this might be the first (and, granted, maybe only) time that some people have read that format. So, I say it is a win for reading.

Honestly, I don’t think most who showed up were there because they were going to run out and buy the book the next day. I think they were there because they love the story, the characters, the imaginary world. This is the first time we’ve opened the program to younger kids– we’ve always held it as a teen or tween program (usually for ages 10-17). But every time we’ve done Harry Potter programming, we have younger kids and parents begging to attend. 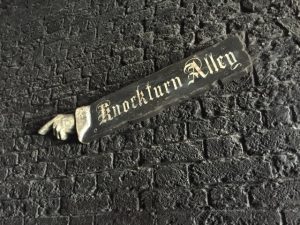 We held this one as a fundraiser for a new library. Ages 6-18 got in free, but anyone over 18 was asked to make a donation. We did the usual Sorting, we had Potions class, History of Magic (a trivia game), Quidditch, Ollivanders, and Charms class. Those we’ve done before. The ideas I brought home from Orlando added a fun touch. While I was in the heat of the Florida sun, I embraced my inner Slytherin in Knockturn Alley. Not only did I love all the creepy dark things there, it was cool. Deliciously soothingly cool, and so I skulked around there quite a bit. Idea I brought home? We transformed an area of the venue into Knockturn Alley using all my Halloween decorations. The kids loved it.

I also brought home new ideas for our Honeydukes shop, and we bought some cheapo toys to create  Weasley’s Wizard Wheezes. We had a Gringotts ATM where adults could trade in Muggle money for Gringotts dollars; kids could earn Gringotts money by attending classes and braving Knockturn Alley. They could then spend their “money” at Honeydukes, Weasley’s, and at the Wizard tattoo shop (face-painter). I liked adding this math activity — I saw lots of kids counting their Gringotts dollars to see how much candy they could afford.

We had loads of families at the event. We had young kids (we allowed 6 and up to attend), and we had plenty of moms, dads, aunts, uncles, siblings, grandparents — the whole family came out for this, many of them in full costume. The teens still showed up, and families had a great time. I really like family style inter-generational programming, and so will keep this in mind for future program design. Up next? maybe Pokemon….