While ALA has MANY popular youth & teen authors signing at booths and listening to your fangirl stories, popular authors of the 80’s also make appearances.

Ann M. Martin, Babysitters Club, and Judy Blume were among those popular authors.

As I walk around the exhibit hall with my Wimpy Kid fan that says, “Millions of kids are readers because of this book,” I remember the days when this was said about Judy Blume. If you hadn’t read Are You There God, It’s Me  Margaret, you would get crazy looks from your friends. Kids would read this book so that they wouldn’t get left out of the conversation at lunch-even boys.

One of my ALA goals was to meet Judy because I was that kid who read EVERYTHING by her (including Forever when I was in the 6th grade). I was that kid who had to be strongly encouraged to try other authors by my librarian after I read all the Judy Blume books.

Judy’s signing began at 3pm but her line began forming at 2pm. It was very humbling to see other adults excited to meet the Jeff Kinney of their childhood. 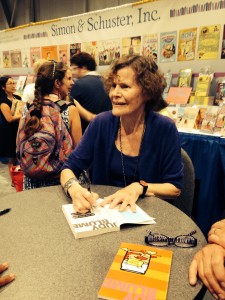 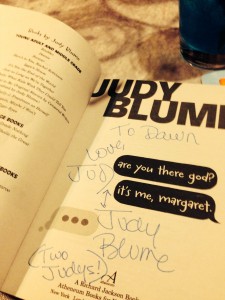