As it gets colder and we start to plan 2014 Summer Reading, two of my favorite memories of the 2013 Summer Reading program pop into my head. As the Director of Family Engagement at the Fayetteville Free Library in Fayetteville, NY this summer through brainstorming and creative discussion as a staff we came up with two awesome and different programs that cost next to nothing and were a huge success: kickball and a sleepover in the library!

Our library has a pretty large green space to the left of the building that only gets used for additional parking during big library events. With my love of libraries, sports and coaching I had the idea of starting a kickball league for the summer at the library! I bought a kickball, some bases and cones, then created a waiver for parents to sign for their kids in case anyone got hurt. Every Tuesday during summer reading local kids would come out in sneakers and I would bring out a water cooler and cups for water breaks. I was always the designated pitcher and we would play for about an hour. Kids were laughing, exercising and meeting new friends, while parents were mingling on the sidelines.

This idea wasn’t too hard to sell to the community or the staff because it went right along with the mission of the library, “ to provide free and open access to ideas, information, programs and spaces”!  One of the mothers was so excited about this program because she had a discussion with other parents in the neighborhood about how cool it would be to have a place to play kickball with families. Now, this league was not competitive and after about 2 innings of playing I stopped keeping score and none of the kids even asked who was winning, it was all about fun! The kids weren’t the only ones playing, the program was geared for families and most of the time the moms and dads played right along with us and that made the experience that much more invigorating! 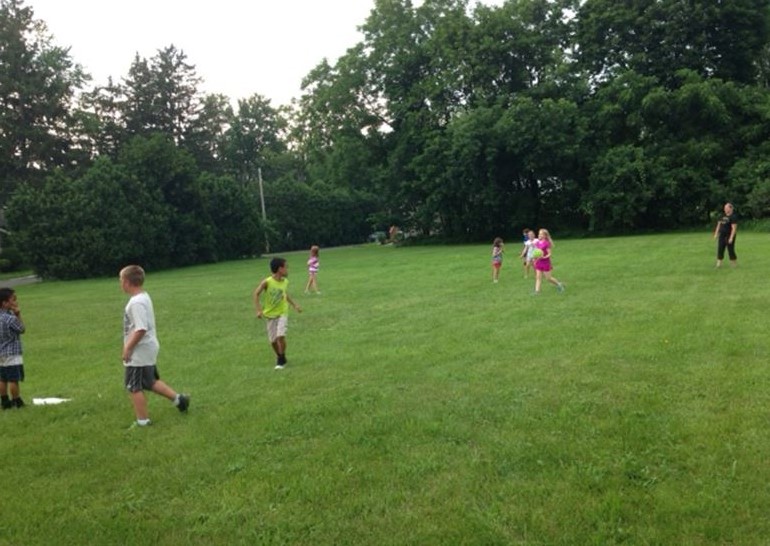 Night at the Library:

Another huge success was our “night at the library.”  We invited 5-8th graders to literally spend the night at the library. We had spots for 10 boys and 10 girls.  The Director of Innovative Family Services, Margaret Portier, and I were two of the chaperones, and two males, a volunteer and an intern, were the others.  Kids were dropped off by 10pm (after we had a library event for families from 6-10pm) and were picked up by 8:30am Saturday morning.  Parents signed a permission slip and kids were able to sign up for the event once the slips were turned back in.

We had a list of activities to do with the kids but after showing their enthusiasm for running around the library in their pajamas, playing on the Wii’s and playing Minecraft in whatever room they wanted too, we just let them take over!  We bought some juice and some snacks, brought a French press to make coffee for the adults and partied all night long. We watched “The Goonies” in the Community Room.   The boys slept in the front of the library in the stacks and the girls slept in the children’s room.  Margaret and I slept right next to my desk and didn’t get to bed until 4:30am or so. We played “Just Dance” and were as loud as we wanted. This program cost less than $20 dollars and it did require some extra time in our schedule, but I can literally say “I have stayed here all night”.  This program was such a big hit with the age group that we can’t wait to do it again next summer! 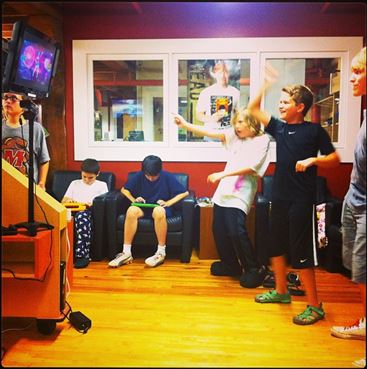 –Meredith Levine, member of School-Age Programs and Services Committee, and is the Director of Family Engagement at the Fayetteville Free Library and can be reached at mlevine@fflib.org or at www.fflib.org.