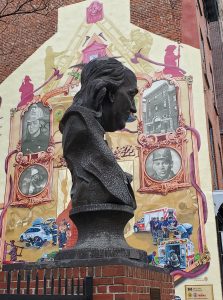 When I made my reservations for Midwinter last year, I didn’t know what the weather would be like. Philly in winter? Could be rough! I decided to stay at the main conference hotel, and it was fantastic. Raining buckets outside? No problem! I didn’t even have to put on a coat; I just ambled to the elevator, and off I went. No outside required. That was pretty cool, but then I realized today that I hadn’t seen anything of Philadelphia at all. And I’m leaving tomorrow, eek!

Happily, I was lucky to spend the afternoon with a dear friend from Chicago (we have standing Monday afternoon dates at conference), and we wrapped up the conference by seeing the Philly sights. We saw Christ Church Burial Ground, where Benjamin Franklin is buried (his grave is covered in pennies from people looking for a little luck, and as it turns out, those pennies are damaging the grave…ugh!). We then took a stroll down Elfreth’s Alley, which is a truly historic street in Philadelphia that dates back to 1702. Although the entire street is a historic landmark, people still live in most of the houses. During our travels, we also stopped in to see the Liberty Bell (of course!), and we ended the day by touring the National Constitution Center, which is a museum devoted to the U.S. Constitution. Hmm, that makes it sound awfully dry and dusty, but it was fascinating and so fun! Lots of interactive displays, a fantasy voting booth (I was able to cast my vote in a fantasy match between Jimmy Carter and Dwight Eisenhower), and intriguing questions about when women were finally able to vote (dishearteningly, not officially until the 19th amendment was passed in 1920).

What a great way to wrap up a great conference. Thanks for having us, Philly—I hope to see you soon!

Sarah Hashimoto is serving a third year on ALSC’s Membership Committee. She is a Community Engagement Manager for Jackson District Library in Jackson, Michigan.