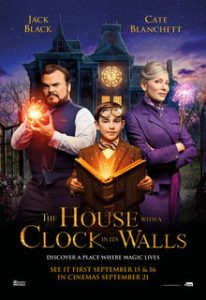 Just in time for Halloween, a classic of the kidlit horror genre was adapted into a film. John Bellairs first published The House with a Clock in its Walls in 1973, a time of unrest and upheaval in the United States and around the world. It feels surprisingly fresh when read in 2018.

21st-Century readers will be forgiven for finding the opening chapter of The House with a Clock in its Walls a bit familiar. Recently orphaned, loner Lewis is on his way to live with an uncle he’s never met. And yet, what Lewis finds when he arrives at his Uncle’s wondrous and sinister home is the stuff of both dreams and terrible, terrible nightmares. Uncle Jonathan is a wizard, and somewhere in his house there is a clock placed by the malevolent former owners of the home. It’s ticking down towards something, but no one knows what. In an attempt to impress a new friend, Lewis accidentally unleashes a horror on the world, and almost doesn’t make it out alive. There is imagery in this book that has stuck with me since I first read it as a child – the glowing eyes of the neighbor across the street, the twin beams of a car trailing Lewis and his uncle home from the movies, a stained-glass window that moves when you look at it. The initial familiarity falls away as you read on, and you are left with a truly terrifying ghost story.

The movie is stacked with talent – from the director, famous horror visionary Eli Roth, to the cast: Jack Black stars as Lewis’ uncle, the wizard Jonathan, and no less than Oscar-winner Cate Blanchett stars as Mrs. Zimmerman, the witch next door. Reviews of the film were favorable – it currently has a 67% on review aggregator Rotten Tomatoes, who summed up the film’s appeal as “An entertaining PG detour for gore maestro Eli Roth, The House with a Clock in Its Walls is a family-friendly blend of humor and horror with an infectious sense of fun.” Still, for sheer creeps, nothing tops reading the original book (and Edward Gorey’s deliciously creepy illustrations therein). A movie as scary as this book would be rated R, so it is no surprise that the prose version leaves readers with an unsettled sense of dread, while the film version leaves viewers with the hopes for a potential sequel. After all, there are currently 12 books in the Lewis Barnavelt series!