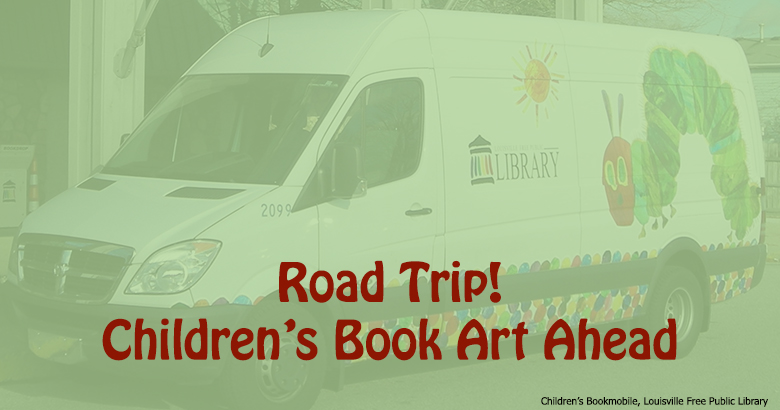 Happy Picture Book Month to all! When I recently received an email from Sarah Johnson (thanks, Sarah!) about Mo Willems’ Elephant and Piggie children’s library card at Forbes Library in Northampton, Mass., it got me thinking. I bet there are lots of instances of children’s book art adorning library spaces all over the country. One well-placed query on the ALSC-L electronic discussion list and my guess was confirmed! I  received some great examples of illustrators working with libraries, and children’s spaces decked out with fun, bright, inspiring illustrations straight out of the pages of beloved picture books and the imaginations of the artists. Join me on this virtual road trip to discover children’s book art in libraries.

Bring on the Art!

Check out these libraries and the wonderful gems they showcase!

The Brooks Memorial Library exhibits original art from children’s picture books in their children’s book illustrator exhibition cases. The displays demonstrate to library visitors the many steps involved in creating a children’s book.

The current exhibit features the work of Astrid Sheckels and shows the process for revising both text and illustrations. It even includes little sculptures the artist created of the characters from modeling clay so she could view them in 3D while drawing them from different angles. 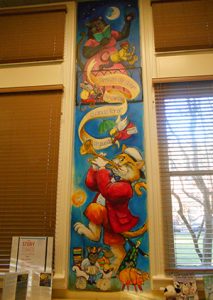 The Children’s Resource Center features two murals by illustrator Susan Guevara, depicting characters from her book Chato and the Party Animals. The murals were created in 2006, in the wake of Hurricane Katrina, as a gift to the library. They portray a mix of literary and musical icons and the resilient spirit of New Orleans.

The title of the murals comes from a Mexican adage: “Tambien de dolor se canta cuando llorar no se puede.” Translated, it means, “Sorrow also sings when it runs too deep to cry.”

DeKalb County sold a Pete the Cat library card as part of a fundraiser for the Library Foundation in 2012. (Some cards are still in use today!) Along with the limited-edition “Be a Cool Cat” collector card, shirts, magnets, posters, and water bottles displaying the card logo were also available. Local resident and Pete the Cat creator James Dean appeared at the library to help launch the card campaign. 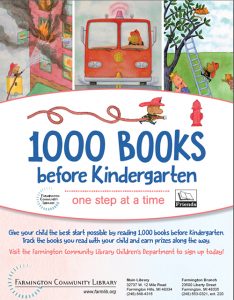 Wong Herbert Yee provided the Farmington Library with his original graphics from Fireman Small for the library’s 1,000 Books before Kindergarten program materials, including a brochure, reading log, and flyer. Yee is a local Troy, Michigan resident. 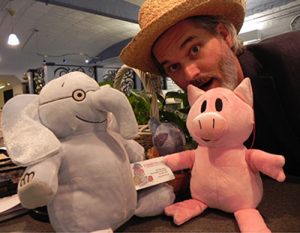 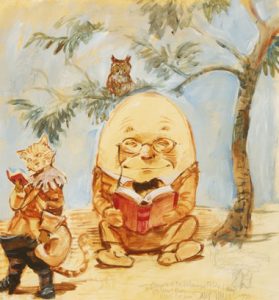 Thanks to a grant from the Irving S. Gilmore Foundation in 1990, Kalamazoo Public Library commissioned several artists to create original artwork that transformed their Children’s Room. Local author/illustrator David Small painted a pillar with nursery rhyme characters; a detail of it is at left. The artists provided striking pieces from stained glass to soft sculpture, and framed artwork graces the walls throughout the Children’s Room. Check out the online gallery of KPL’s Children’s Room art. 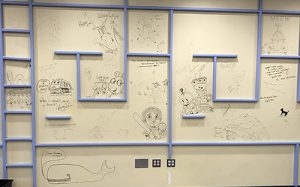 Each year Savannah hosts a Children’s Book Festival. The year’s featured authors and illustrators are asked to sign and/or draw right on the walls of the main library on Bull Street! The photo at left displays work by Marc Brown, Jim McMullan, David Ezra Stein, and Michael P. White, among others. The mission of the Savannah Children’s Book Festival is to inspire the next generation of authors and illustrators. A poster contest and a young writers contest are also held in conjunction with the festival. Contest submissions and photos are on Facebook. 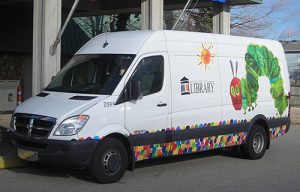 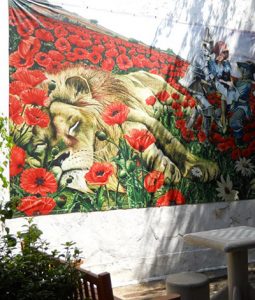 The Charles Santore Library in South Philadelphia is named after Charles Santore, Sr., a local politician and father of illustrator Charles Santore. The library features artwork by the latter, from the poppy scene of The Wizard of Oz and Vain Jackdaw from Aesop’s Fables. The murals are fabric mounted to the walls of a small outdoor patio off the children’s room. 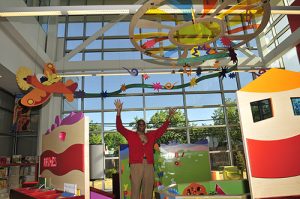 The Warrensville Heights Branch highlights numerous art pieces based on Ashley Bryan’s work (Let It Shine) on the walls, as well as play space pieces and overhead installations. 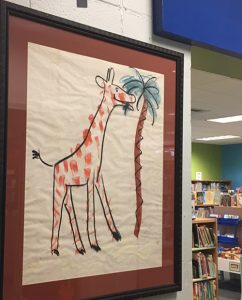 Wiggin Memorial Library features a large drawing by H.A. Rey, Curious George illustrator. Rey created it during a visit to the library on September 27, 1966.

What children’s book art have you run across in your library work and visits? Please share with us in the comments section below.

Many thanks to the following ALSC-L subscribers and librarians who contacted me with their photos, leads, and stories. My sincere apologies if I missed anyone. I followed up all leads but did not hear back from a couple libraries in time.