Some libraries partner with local businesses to offer discounts when you present your library card. The Crystal Lake Public Library in Crystal Lake, IL (my home library) is one such library. Businesses they have partnered with include both national and locally owned shops and restaurants including Wendy’s, Chili’s, Dairy Queen, and Jersey Mikes.

My library offered small gifts for both patrons signing up for new cards and for people who just showed their cards to desk staff. We also offered a limited edition Teen Titans library card. What was extra cool, in my humble and nerdy opinion, was that patrons (and staff) could exchange their current card for the Teen Titans card. I jumped on that offer! 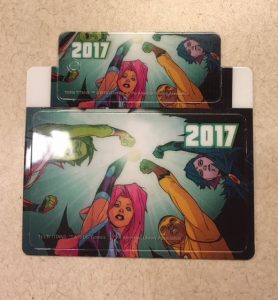 Since I have my cool, new card propped up at my desk, I see it every day, and it inspired this month’s blog post. In the random wanderings of my thought processes, I saw the totally awesome new card and then wondered how many of our patrons got the new cards, and then began to wonder how many of my friends and acquaintances have cards. This led to me creating a poll on Facebook. I asked one question: Do you have a library card?

Less than 3% of respondents answered with an unequivocal “No.” Another 2.86% were unsure if they had a card or not. The vast majority have a library card.  Roughly 81% of my friends and acquaintances answered with a simple “Yes.”  The remaining 13% either had a card a one point, or had a more complicated answer involving family members, geographic limitations, and lost cards.

I received a lot of interesting feedback from my friends in regards to the survey. Several mentioned that they wished they could have a library card, but lived outside of district lines and therefore don’t have library privileges without purchasing non-resident cards. Others explained that, while they had a card, they don’t use them because of the frequently long wait times for holds on popular titles. Both topics that can be addressed at another time.

Some shared that they and their kids, or that an entire family have cards; that the library is “my happy place”; and some listed the multiple cards they hold. One childhood friend has four different valid cards. A couple of friends mentioned that they have cards but purchase most of their books, and then also use e-readers, and other online resources.

I feel the need to share not just with patrons, but with my own friends all the benefits of having a library card.  This will be my next covert social media campaign – sharing with my peeps everything they can access with their cards.  Just in case having a superhero card in one’s wallet isn’t incentive enough on its own.