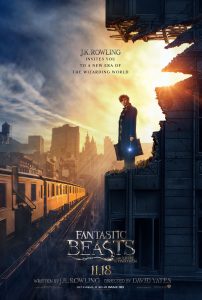 This evening, movie theaters around the country will once again play host to a movie set in The Wizarding World of Harry Potter, though this one takes place long before Harry was born. Fantastic Beasts and Where to Find Them (PG-13)drops this weekend, and a reintroduction to the familiar, beloved world of wizards couldn’t come at a better time. Reviews are mostly positive , and the film currently has an 85% on Rotten Tomatoes, though that number may change as more reviews roll in. Variety noted that the film “has clearly been designed for the most devoted of Rowling’s fans” which is reassuring to this Potter fanatic!

Though it shares a title, the upcoming movie is not an adaptation of Fantastic Beasts and Where to Find Them. That slim volume, originally sold in  a box set with a copy of Quidditch Through the Ages, was a abbreviated version of a textbook mentioned in the original Harry Potter series. The new movie takes its inspiration in the story of Newt Scamander, the man who purportedly wrote the Fantastic Beasts book Hogwarts students read at school. With plans for four more sequels to follow, librarians can expect interest in both the original series and any tie-in related material to rise.

Since this is the first movie set in the Wizarding World that is not based on a previously published book, and since this is the first Potter-related screenplay Rowling wrote herself (Harry Potter and the Cursed Child is co-written), there may be interest in the Fantastic Beasts screenplay, which is being released for sale on Friday, November 18th (the official opening day of the movie). At our library, we had a sharp decline in holds and checkouts for Harry Potter and the Cursed Child following its bonanza first month on our shelves, so we did not stock similarly high levels of this screenplay, though that may of course change, depending on how big the movie is.

Warner Brothers has scheduled the release of a new version of the original Fantastic Beasts book for March of 2017. Do you have plans to see the new movie?