With Father’s Day fast approaching, it’s time to bring out our favorite books about fathers, grandfathers, uncles, and other father figures. If you’re looking for some new additions to add to your collection, displays, or book lists, consider these recently published titles: 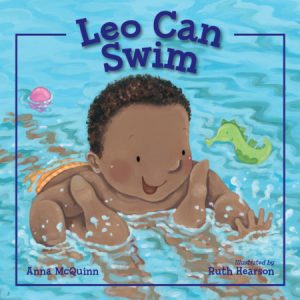 Anna McQuinn’s Leo series is a charmer. Now that we’ve tagged along while Leo enjoyed a babies program (similar to a lapsit story time) and a story from big sister Lola, it’s time to join him on a big outing–baby swim class! Dad and Leo have fun kicking, splashing, and just getting comfortable in the big pool. Now that pool season is in full swing, Leo Can Swim is an adorable story to share with your toddler story time groups. 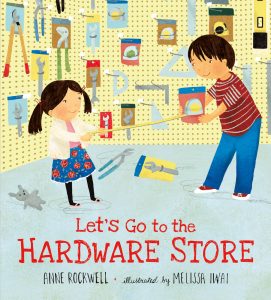 (image taken from US Macmillan site)

Accompanying dad on a weekend hardware store errand is something that is a part of many childhoods (including mine!), so Let’s Go to the Hardware Store would be a terrific title for dads and children to share together. Anne Rockwell has a special knack for turning everyday activities into stories that appeal to both children and parents; this charming tale of dad and his children finding home improvement materials is another sweet title in her impressive body of work.

Interpreting sounds and spoken language is a common part of growing up for CODAs (children of deaf adults). As a CODA growing up in Brooklyn during the Depression, The Sound of All Things (set in 1930s Brooklyn) is undoubtedly based upon his experiences. A young boy tries to interpret all the many sounds while the family is on an outing to Coney Island, but struggles to find the right words to describe the many sounds, especially when communicating with his father. Luckily, a visit to the library on the way home helps him find new words! 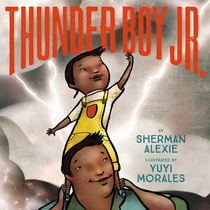 Thunder Boy Jr. , which was recently named as an honor book in the Boston Globe-Horn Book Award picture book category, features a warm and authentic relationship between a young boy and his father. Wanting a name that’s different from his father, the two consider several names before settling on one that’s perfect just for him.

What are your favorite books about fathers and other father figures? Let us know in the comments!