The 70th annual Tony awards were this past Sunday. Coming so soon after the horrific attacks in Orlando, the ceremony, speeches, and performances served as a balm and tonic to our battered souls. Theater is often a place of refuge for kids who feel like they don’t belong. On the stage, they can figure out who they are, and in the theater community they can find a place to call home. Here are some books for middle grade readers that celebrate life on the stage.

Better Nate Than Ever, by Tim Federl

Tim Federle got his start on the Broadway stage, and his knowledge of the inner workings of life on the Great White Way is on full display in this funny, heart-rending book, which was the recipient of a Stonewall Honor. Nate just wants to perform on Broadway, but he lives in Jankburg, PA, a town that couldn’t be further from NYC or less tolerant if it tried. When auditions are being held for E.T., The Musical, Nate heads to New York to try his luck in the city of his dreams. 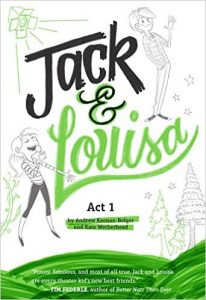 Jack and Louisa: Act One by Andrew-Keenan Bolger and Kate Wetherhead

The authors of this book, both Broadway vets, are also responsible for a hilariously funny web comedy, Submissions Only about the inanities and daily grind of auditioning for shows on Broadway. Although the web series is decidedly not middle-grade, this book, about a former Broadway performer (Jack) who loses his first starring role when his voice changes; moves to a small town and meets an M.T.N (musical theater nerd), will ring true to anyone who spent their younger years belting out showtunes with their friends. 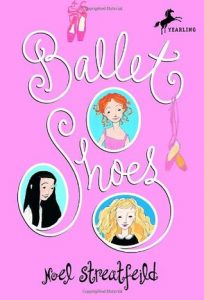 This classic book about the love of performing and dance remains a perennial favorite. It’s been a movie twice  (most recently starring Emma Watson) and has the distinct honor of being the book Meg Ryan helps a customer find (while crying in Tom Hanks’ bookstore) in You’ve Got Mail. Ballet Shoes is the story of three sisters with three decidedly different interests (ballet, theater, and automechanics) who take ballet classics with an old master. The other, unrelated books in this series, including Theatre Shoes and Skating Shoes are all about kids who love to perform, making the whole run a great choice for the theater-loving among us.

What are your favorite middle-grade books about theater?