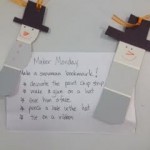 One of the things that I miss the most about working in the public library is the programming.  I know, I know…when I was in the public libraries, programming could be overwhelming as I worked in large branches with loads of kids.  I took to twitter to muse about missing crafting, and got some suggestions from my PLN that morphed into our “Maker Mondays”.

For a variety of reasons, I decided to make this pretty much a passive program. Because of our active after school program, I decided to make it happen before school when there are usually quite a few kids hanging out.  Since I like crafting so much, that is the genesis of the idea of “making”.

I have chosen basic crafts to start (thank you pinterest!).  Our first week, we simply cut out paper snowflakes and wrote some hopes and wishes for the New Year on them to hang in the students’ windows.  The second craft (seen above) is a simple book mark using paint strips, construction paper, and ribbon.

So far we have had a variety of students ranging from 2nd graders to 7th graders take part.  The program takes minimal planning, and induces many smiles.  I’m so happy I tried it!