Last month’s all-call for Caldecott 75th Anniversary celebration ideas yielded a jackpot of festive programs and events.  Contributors featured here received an autographed copy of a Caldecott winner/honor title. The year-long celebration of the 75th Anniversary of the Caldecott Medal is approaching the climax, and it’s not too late for you to join the party!  Try one of these golden ideas on for size at your library. 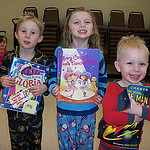 The Kimberly-Little Chute Library in Wisconsin held an evening Caldecott Pajama Story Time in January. The 2013 winner was announced and favorite winners from previous years were read, followed by a screening of the film version of Officer Buckle and Gloria.  Attendees also explored Caldecott art styles, such as the pencil/charcoal of Kitten’s First Full Moon. Children and families selected book jackets from picture books to take home and use for creating art projects. (Submitted by Ann Hardginski)

On Your Marks, Get Set, DRAW! 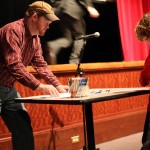 During the annual 90-Second Newbery Film Festival screening in Chicago, festival creator James Kennedy played a game in honor of the 75th Anniversary of the Caldecott Medal, in which children’s picture book author and artist Aaron Zenz faced off against a young audience member, trying to draw in 75 seconds what they think the cover of a particular obscure Caldecott-winning book might look like. During the New York screening of the 90-Second Newbery, authors Dan Yaccarino and Brian Floca participated in the Caldecott drawing face-off. (Submitted by Eti Berland)

Oregon’s Deschutes Public Library held its first public mock Caldecott election.  First,  a Celebrate 75 website was created featuring 25 books that the library staff thought were the best of the year.  Next, the Youth Services Manager visited branch libraries to present a lively program about the Caldecott medal, including its history, criteria and voting process.  In December, staff narrowed down the list to 6 titles and led a discussion with the public.  The week before ALA Midwinter, the public was invited to vote either online or in the libraries.  Deschutes Public Library staff and patrons are proud that their winner was the same one selected by the 2013 Caldecott Committee–This Is Not My Hat by Jon Klassen.  (Submitted by Heather McNeil)

A Whole Day of Caldecott 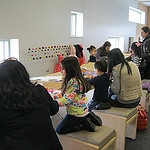 The Fountaindale Public Library in Bolingbrook, IL had a special day-long Caldecott celebration when local students were out from school on holiday.  Children took part in a scavenger hunt featuring items from the books in the 75th anniversary logo (such as a fox puppet or a photograph of a kitten).  At a writing and drawing station, children expressed favorite Caldecott memories which were included in a display of Caldecott book covers.  Special storytimes, activities based Caldecott art styles, and a screening of Hugo rounded out the day.  (Submitted by Sarah Dolley)

Celebrating the Caldecott medal is not just for kids!  Students, faculty, and staff at Walsh University in Ohio voted for their favorite Caldecott titles as part of an interactive display set up in a campus library.  One selected winner will receive a either a copy of their beloved Caldecott title or a copy of the newest Caldecott winner.  (Submitted by Katie Hutchison) 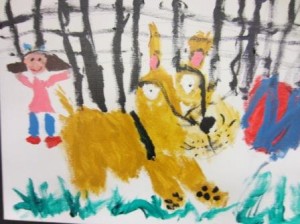 The Latin School of Chicago’s Lower School Library is hosting a Caldecott Art Share for students in Junior Kindergarten through 4th grade.  Young participants are using Caldecott winning titles as inspiration for original artworks.  Some students are choosing to replicate artists’ styles, whereas others are exploring new mediums using a book’s characters or themes as a jumping off point.   A gallery space will be constructed to display the art pieces with the entire school community.   The Lower School librarians established a Pinterest board to showcase Caldecott anniversary party ideas.   (Submitted by Elisa Gall)