March Break. Commonly known as Spring Break in the states. A mad rush of programs are planned. Our fiscal year ends on March 31, so we try to use any remaining programming money during March Break, and our branches do a great job of lining up programs.  Just click here if you are interested in seeing what a small rural Nova Scotia library system can manage to offer!  So, back to the LEGO.  Several of our branches offer regular LEGO programs. We have 3 boxes of “communal” LEGO that are, ostensibly, able to be used by any branch. In reality, they are used by the branches that hold a weekly program. During 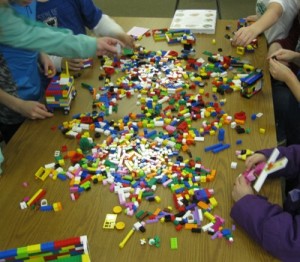 March Break, however, one branch that does not hold regular programs asked to use a box of LEGO for an all-day LEGO blow out. No problem, I said (cue foreshadowing).  This branch, let’s call it Branch B, wanted to use it on Wednesday. Branch A holds their program on Friday. We have a van that does deliveries Monday, Wednesday, Thursday, and Friday.  I got this! On Monday, take the LEGO from Branch A, which is geographically first on the list, deliver it to Branch B, which is further up the line. On Thursday, reverse the process. On Wednesday morning, about 45 minutes before the program is to start, Branch B calls and says they have no LEGO. We realize the LEGO is on the van, which will not get to Branch B until later in the afternoon. Fortunately, Branch C has a box of LEGO, and Branch C is located in the same town as our headquarters office. Branch B is about 35 minutes away, so if we leave RIGHT NOW and drive Branch C’s LEGO to Branch B it should get there just in time. Whew. So… to make a long, long, long story problem  shorter, after about 5 frantic phone calls and much LEGO wrangling, the program goes on. Later in the day I discover that on Mondays, the van delivery does not stop at Branch A first, because it is not open on Monday, and Branch B is.  Lessons learned:  A) Communication is key — I will always check with the van schedule before transporting communally owned equipment in the future; and B) buy more LEGO.  The best part:  Lots of kids showed up to build with LEGO, and everyone was happy in the end.  My new t-shirt will read: I Survived the Great LEGO Caper.