Roald Dahl has always been one of my favorite KidLit authors. I loved these books when they were read out loud to me in early elementary school. I loved them when I re-read them myself in middle school. And in graduate school, I loved them all over again as I re-re-read them for class. An author who can stand up to multiple re-readings at any age is a surefire win for any collection. 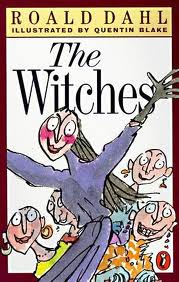 My all-time favorite Dahl book is his classic horror story The Witches. It turns out that the world is full of witches, who exist for one reason only – to rid the world of all human children. The witches hide among humans using wigs, gloves, and pointy shoes, but they are truly terrifying without their disguises. When a young boy goes to live with his grandmother, he hears (and heeds) her tales of witches luring young children to their doom, and keeps a constant lookout for any murderous fiends wherever he goes. This talent for spotting witches comes in handy when he accidentally sits in on a meeting of all the witches in England, who are conducting a nefarious plot to turn all the children in the world into mice.

The book is really devious and frightening in parts, and it does not wrap up in a neat way. Our fair hero does get turned into a mouse, and although he saves the other children in the world from meeting the same fate, he is unable to reverse his own. That’s ok, because as a mouse, he doesn’t have to go to school!

The film version of The Witches was released in 1990, right before Dahl’s death. There is one major difference between the two – in the movie, the boy is transformed back into a child by a reformed witch. In Dahl’s tale, there is no way to reform a witch – they exist to kill children. To make the film slightly more palatable to general audiences, a more Hollywood-friendly ending was created.

Despite the difference in endings, I love the film version of this book. It perfectly captures the tone of the story, and keeps a lot of the more lurid details. The witches plan on luring the children of the world to their deaths with free chocolate. Children smell like “dogs droppings” to witches. And best of all, when they take off their wigs, gloves, and shoes, they are terrifying! The acting is top-notch, especially Angelica Huston, who is divine as the Grand High Witch. Finally, the mouse work once the boy is transformed is excellent. This is the last film Jim Henson personally worked on, and that definitely shows.

Roald Dahl was not the biggest fan of the film (he disliked the happier ending). Yet even with the change in ending I think this is one of the better book to film adaptations. For kids who like a slightly safer scare, I can’t think of a better movie.