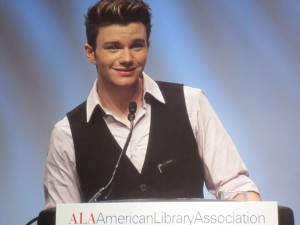 I know there are many of us out there: librarians that “gleeked” out when Chris Colfer’s name was announced as one of the authors to present at the 2012 Annual ALA Conference in Anaheim.  I know because I was one of them. 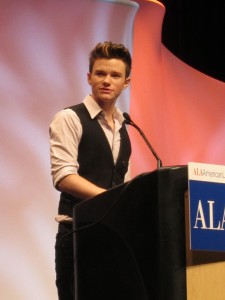 Librarians love Chris Colfer.  Why you may ask?  Because he loves libraries and writes children’s books.  In fact, it had been a dream of his to write “The Land of Stories” since he was ten years old.  How sweet is that?  Let’s face it, celebrities have a lot of choices after they achieve stardom.  They can design their own clothing line.  Have a fragrance named after them.  Star in their own reality TV show.  I think it’s safe to say that most of them, especially at the tender age of 22, would not decide to contribute to the world of kid lit and pen a novel–let alone a trilogy.  Chris Colfer is not your average celebrity. 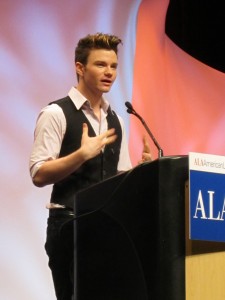 He was truly everything a librarian would want in a presenter–eloquent, witty, and inspirational.  We laughed when he read through emails he exchanged with his illustrator exposing Chris’ hysterically high attention to detail. “Can the word ‘of’ in ‘The Land of Stories’ be lowered 3 millimeters so that the title is more horizontal and less arced?” (He used a real ruler…)  There were cheers from the audience when Chris suggested that Ryan Murphy cast the McKinley High School librarian to look more like Megan Fox, rather than the stereotypical librarian that currently is on the show.  And I know many librarians sitting in the audience tweeted when he said, “I hate the word bullying.  Let’s just call it like it is.  Harassment.”  Props, Chris.  Mad props.

Those of us lucky enough to attend the program each got our own ARC of his first book, set to be released on July 17.  We also got to see projected on screen a hand-drawn picture of the map of The Land of Stories as imagined by ten-year-old Chris himself…complete with a sai sword spinning Rapunzel.  After his program, he offered the floor to questions from the audience.  When asked “Would you prefer to win a book award for your writing, or an Oscar, Tony, or Emmy for your acting?” Chris replied “I’m not greedy, I’ll take any award they decide to give me.”  Well, Chris, I’m sure there will be many more awards in your future.  You are a force to be reckoned with, and in this librarian’s humble opinion, one of the most talented celebrities in Hollywood today.