There has been a lot of conversation recently on listservs and social media about using music in programming, especially bilingual or multicultural programming. Music plays a big role in early literacy and language development and studies have shown that music activates a number of parts of the brain. It’s easier to learn some things when they are set to music–many of us learned the alphabet singing “The Alphabet Song” and to this day I sometimes find myself singing it when I need to remember whether Q comes before or after R. 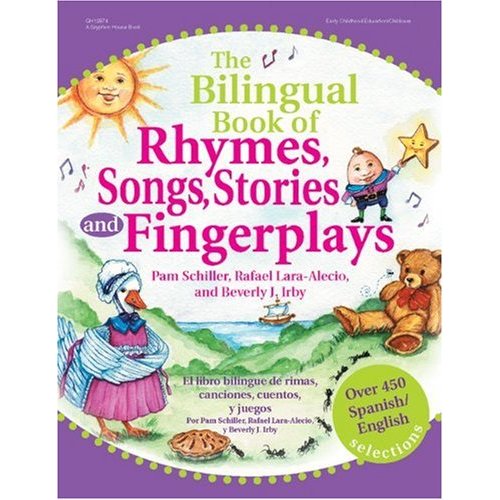 While most of us recognize the importance of including music in our programs and storytimes, finding appropriate songs and music in other languages can be a real challenge. Some libraries bring in performers as part of their programming for El dí­a de los niños/El dí­a de los libros or another special event but of course that may be affordable only once or twice a year. To include music in everyday programs and storytimes librarians usually will have to do it themselves. There are not many songbooks available that include songs from other cultures and in languages other than English but there are a few. It’s a little easier to find books with songs in Spanish, like De Colores and Other Latin American Folksongs for

Children by Jose-Luis Orozco or The Bilingual Book of Rhymes, Songs, Stories, and Fingerplays: Over 450 Spanish/English Selections by Pam Schiller. For other languages try Skip Across the Ocean: Nursery Rhymes from Around the World collected by Floella Benjamin. In spite of the title, the book includes some songs and lullabies in English and the original languages. Unfortunately there is no music provided so librarians still have to find another source to get the melody.

Websites like Songs for Teaching provide a nice selection of songs in French, German, Spanish, and Chinese as well as songs from around the world (in the multicultural and diversity section) like Hello ‘Round the World, that teaches singers how to say hello in languages ranging from Hawaiian to Finnish and more. You can view the lyrics and listen to a clip of music or purchase downloads or printed material. Mama Lisa’s World is the mother lode for international music. Lyrics are provided in English and the original language and many songs have MP3 files or sheet music. Songs are available from every continent (except Antarctica). Even if you don’t speak the language, you may be able to learn the words through practice and add to your bilingual programming.

Burnaby Public Library in British Columbia, Canada has started collecting songs and
rhymes in many languages as part of their project, Embracing Diversity: Sharing
Our Songs and Rhymes. This project includes videos created by native speakers of songs and rhymes in 15 languages. Often the singer or singers (which sometimes includes children) are in traditional or ceremonial dress so showing the videos during a program can provide a more authentic experience. The lyrics and other printed material and links to additional resources are included along with the video. The site is growing and the library is inviting people to add to the collection by creating their own videos so the selection and languages will continue to grow. (Instructions for submitting a video are available at http://www.bpl.bc.ca/kids/embracing-diversity/add-your-own-video.)

If you know of other resources please share them. We can all help keep music — and languages –alive!