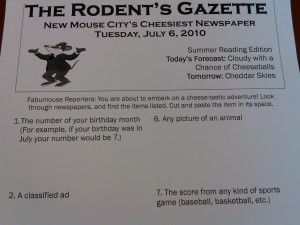 Geronimo Stilton is one of those series that flies off the shelves at our library, so we decided to celebrate The Big Cheese himself during summer reading with an afternoon of “Geronimo Games.” We targeted the program to grades 1st through 5th, and had 135 Geronimo fans in attendance for the hour.

We were excited to learn that a Geronimo costume was available for rental through Costume Specialists for $60. The costume consisted of a suit, a jacket, two hand mitts, two fur boots, a fat pad (!), and Geronimo’s (heavy) head. The staff person selected (coerced?) to wear the costume should be of average build and height, and in good physical condition — the costume is hot and heavy! I bought our Geronimo a shower cap to wear as a barrier between her head and the costume.

Our program began with a Mad Lib I created based on the Geronimo book A Fabumouse Vacation. The books often read like Mad Libs themselves, so converting a passage was easy. We then brought out Geronimo to the tune of Free Ride by Edgar Winter because, well — I had the CD in my car! Not exactly a relevant pop culture reference to the kids, but I got a kick out of it. Geronimo cheesed it up with the crowd during our trivia contest, where kids were selected to come on stage and test their knowledge of the books. I was impressed that I couldn’t stump them!

Geronimo then took a little cheese break while I read a passage from Wedding Crasher. I choose a chapter in which Geronimo finds himself in desperate need of a bathroom after eating trick chocolates given to him by his prankster cousin Trap. And if you’re thinking “she just had to go for the cheap toilet humor laughs, didn’t she?” — yes, that’s exactly what I did. It worked, too.

Our final activity was a newspaper scavenger hunt in honor of Geronimo’s career as a journalist, an idea I borrowed from Bucyrus Public Library. I created my own version of Geronimo’s Rodent Gazette, copied it on 11 X 17 cardstock, and asked the kids to find things like a picture of an animal to cut and paste from a stack of newspaper discards. Unfortunately, this activity wasn’t a great match for our particular event. Parents are asked to wait outside our meeting room during our school age summer programs to allow us the space to accommodate more children. We had several teen volunteers, but not enough to give all 135 kids the guidance they needed for this activity. Many kids were unfamiliar with newspapers, and seemed frustrated. We only had 20 minutes remaining in the program, and that wasn’t nearly enough time. I encouraged the kids to take the activity home along with some newspaper discards, and to ask their parents for help in finishing it. I still think it’s a great activity, but it would have worked better with a smaller crowd, more time, and additional adult guidance.

We distributed puzzles reproduced from the Geronimo Stilton website as the children left. At the end of the program, parents were invited in the room to meet Geronimo and snap pictures.

Ideally we would have included some sort of cheese tasting, but our large crowd made that cost prohibitive. I was nervous, too, about offering food (and triggering food allergies) when children are unaccompanied by a parent. But if you have the budget and parental supervision, I think a program like this would be a fantastic way to broaden the kids’ cheese palate beyond mac-n-cheese and pizza.

If you are interested in the Mad Lib, the trivia, or the newspaper scavenger hunt template please email me at sbaier at santaclaraca dot gov. I’d be happy to share!