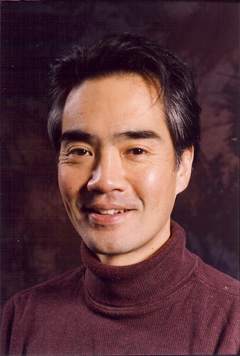 Ken Mochizuki is the author of Passage to Freedom: The Sugihara Story (Lee & Low Books), a 1998 ALSC Notable Children’s Book as well as a 2001 ALSC Notable Children’s Recording which he narrates (Live Oak Media). The 2000-2002 ALSC International Relations Committee included his book Heroes (Lee & Low Books) on its The American Experience: Strength from Diversity book list. He lives in Seattle, Washington.

What is your personal history and how has it informed your work?
I grew up in the multicultural neighborhood of Beacon Hill in Seattle. My parents were born and raised in Seattle, also; my grandparents were originally from Japan, although they had lived in Seattle for 50 years or more. These facts are the major influences on my work. I have been “complimented” on my ability to speak English (the only language I know) well. I am asked where I am from, and when I reply “Seattle” I am asked, “But where are you really from?” Total strangers who I have not antagonized in any way have yelled at me to “Go back to where you come from!” My books have evolved from these types of incidents. I wanted to tell the American experiences of those of us of Asian descent, or counter stereotypes about people from Asian countries as in Passage to Freedom. But, this is not to say that all my books will always be about this subject.

Describe your writing process.
I usually have the book’s ending in mind first, and then start work from the beginning and try to get the story and characters to reach this conclusion.

How do you select your books’ topics?
Pretty much as I answered in the first question, but also the topics have to contain something positive to convey to young readers. In my picture book biography of the martial arts legend, Be Water, My Friend: the Early Years of Bruce Lee, I was reluctant at first to take on this subject since I considered Bruce Lee a promoter of stereotypes (all Asians know martial arts). However, as I began to research his life story, I came upon how he was such a voracious reader. And when I saw a photograph of him sitting and reading by his personal library of some 2,500 books, I was sold on doing his story — the intellectual and spiritual Bruce Lee that most people do not know about.

Why do you write for children? What experiences have influenced your writing for young people?
I had never considered writing for young readers until a publisher pitched the idea for a picture book that became my first book, Baseball Saved Us. As I have traveled around the country since that book’s publication in 1993, I see the importance of books for young readers — that it is an alternative or the last line of defense against what the media foists upon our young, or a source of ideas and information our young are not going to obtain anywhere else.

Please describe a few of the collaborations that you have developed because of your writing, either during the writing process or after the project is completed.
My most significant collaboration has been with the illustrator of all of my picture books so far (four), Dom Lee. Even though we do not communicate with each other during our creative processes, his work is half of the book — bringing the words to life. All book authors also work with the publishing company’s editor, and my collaboration with editors has ranged from terrific to acrimonious. A significant collaboration that occurred after a book’s publication was when a major theater company in Seattle, the 5th Avenue Theatre, converted Baseball Saved Us into a stage musical in 2003. I wrote the “book,” or the non-musical portion of the production.

Share any experience you may have regarding audiobooks.
My two audiobooks which I narrated, Baseball Saved Us and Passage to Freedom, were produced by Live Oak Media in New York state. I go into a recording studio, sit on a stool, wear earphones and read with the text on a music stand. I feel like a rock star! The work is similar to being a screen actor — taking direction from the director and repeating the same thing constantly until the director and producer are satisfied with the take. This is done almost line by line, tedious work, although, as a former actor, I am familiar with taking direction and interpreting that direction.

Describe yourself as a reader. What books influenced and inspired you as a child? As an adult?
The books I probably read the most as a child were the set of encyclopedias at home. Certain pages were worn out since I visited them so much. Some of the best books — and stories of all time — I would consider are A Christmas Carol, The Wizard of Oz and Charlotte’s Web. As an adult, I have always had great admiration for the authors who can weave together a great story with social criticism, such as Charles Dickens and John Steinbeck. The book that set me on course to be a writer was No-No Boy by Seattle author John Okada, an inspirational novel about Japanese American post-World War II life which showed me that Americans of Japanese and Asian descent can write their own stories. I would also say that the works of Sherman Alexie have been influential since I’ve been a writer because he is also writing his version of his own ethnicity.

What role did libraries play in your childhood? What role do libraries play in your life now?
The library, to me, was always a haven, almost a sacred place like a church, with something new to explore every time, where I could be transported to another place and time. As an adult and as a writer, the library is an indispensable resource while conducting the research for my books.

What do you consider the challenges and rewards of being an author? Of being an author who visits schools and libraries?
The reward is discovering that more readers than I realize are reading and appreciating my books — of all ethnicities and all over the country, that something universal in the stories touched them. The challenge is to keep it going, to keep cranking out quality books, which isn’t easy to do — can your future books measure up to some of your past ones?

Same for schools and libraries, that people from all walks of life appreciate what you do. A special reward from schools is when the students are interested and inquisitive and are prepared for your visit. The flip side is the misbehaving and undisciplined students — with teachers or administrators not doing a thing about it when I’m doing a presentation, and then make excuses afterward for their students’ lack of respect. I had one of my worst school experiences recently, when I couldn’t hear myself talk even though I was using a microphone! And the school’s principal was sitting there and not doing a thing about it!

What do you want children to come away with after reading one of your books?
As I stated in previous answers, I would like them to know that those of us of Asian descent, that look like me, have been Americans for a long time — that we are not all “foreigners” and that immigration to this country from Asia is not a recent phenomena. Other than that, each book has a different theme or message: that attitude determines altitude (Baseball Saved Us), that anybody can be a hero through simple acts (Heroes), that one person can even make a world-changing difference (Passage to Freedom), that knowing your family history can positively affect how you view yourself (Beacon Hill Boys), that a famous person known for his physical skills was also a voracious reader and writer (Bruce Lee).

Please share a little about your current work.
I am currently working on a YA novel, set in the most part during the incarceration of Japanese Americans in American camps during World War II.

At this point in your career, what has been your most memorable experience?
Again, I think it’s discovering how widely some of my books are read and used, especially in schools. During one national educators’ convention, a teacher approaches me and tells me that she is using one of my books at her school. I look at her name tag, and she was from Hattiesburg, Miss. Or when someone tells me they saw one of my books sitting on a coffee table in a home in Iowa. Also, the traveling I have done in relation to my books — over a hundred schools, libraries, community centers, conferences. I particularly remember reading Passage to Freedom in the huge auditorium at the American Holocaust Museum in Washington, D.C. The good ol’ ‘90s!

In this world of instant communication and concerns about privacy, how does the Internet (if it does at all) affect you personally and as a writer?
The Internet is a magnificent research tool, particularly Web sites and access to library catalogs. At the same time, I know I have to be cautious, since anything I write or is written about me can get out to the world instantly. I ran a search on my name once, and there was a Web site with a rebuttal to a newspaper story I had written about 15 years ago!

What are your goals and aspirations?
The legendary American film director Orson Welles once said that artists do their best work at the beginning and end of their careers because that’s when “they have nothing to lose and shoot for the stars.” It’s in between those two points that’s the tough part — keeping a career going. I just hope to keep going and making a living as a writer. Of course, every writer hopes the “Big One” will come along.

What piece of advice has been the most valuable to you?
Cynthia Kadohata, the Newbery-winning writer of Kira Kira, said: “You write your first book to be published. After that, you need a reason to write.”

Is there anything else you would like to share with the readers of the ALSC Blog?
In 2006, a parent in a town in Connecticut advocated that my picture book Baseball Saved Us be removed from the second-grade reading list because the word “Jap” is used in the text. If one reads the book, the reader will see the context the word is used in — that it is a hurtful word to the Japanese American boy protagonist. It was the first time any objection was raised about the book anywhere in the country, and the book had been in schools around the country for 13 years at that time, with teachers and librarians obviously knowing how to explain that word and what it means to young readers, including kindergartners. The local school board sided with the parent and my book was removed.

If this can happen to my book, it can happen to anybody, especially now when national leaders up for election are advocating the banning of books. Hopefully, we can be vigilant and supportive of each other on a national level to prevent this from happening.

Thank you, ALSC, for providing this medium and the services that you do.