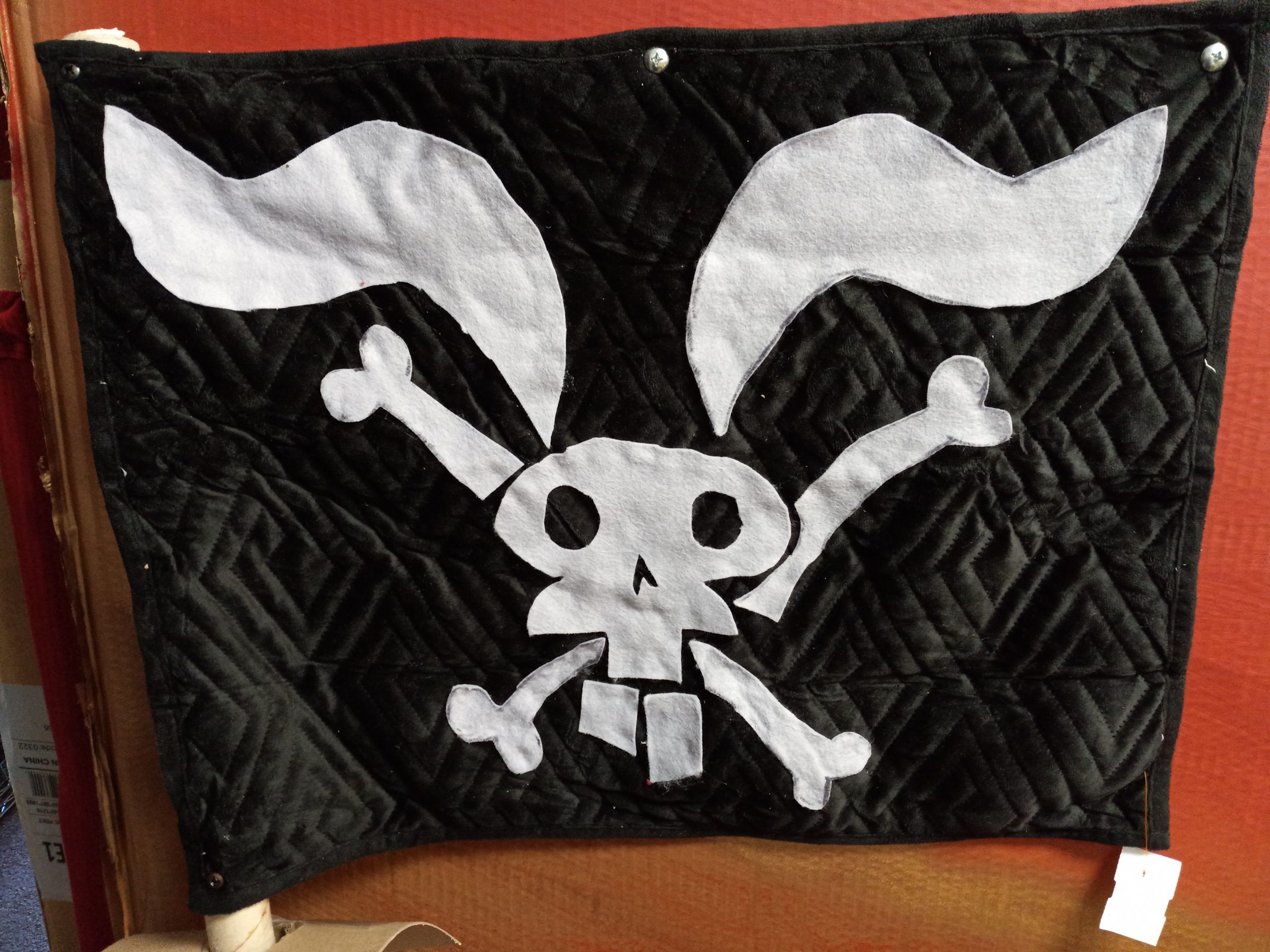 So, we’re making waves this summer and indeed the possibilities are endless. I mentioned last week that I raised an old favorite from the depths. This week, I want to show you how to stretch out just one picture book into an epic summer reading program: Buccaneer Bunnies, to be precise!

Henry and the Buccaneer Bunnies, by Carolyn Crimi tells the story of Henry, who is the “embarrassing” nerdy son of Blackear, the fiercest bunny to sail the seven seas. In a nutshell, Henry proves that books hold the answers to all manner of situations, outcomes and perils — all without being didactic!

But how do you turn a quick read into a 60 minute program?! Well, me old sods, I’ll explain forthwith.

It all starts with the book — no, really

So, last week, I introduced you to Foghorn Follies, thus, we already have a puppet stage shaped like a sailing ship. Convenient, right?! It is! Imagine all the stories and tales you can tell with a ship for a puppet stage! All made from one – yes, just one – refrigerator box. You can always call your local Lowes or Home Depot and ask them to set one aside for you. They are huge, but fold up nicely for easy storage.

Adapting this story requires making a list of props and puppets that you will need to make your show shipshape and see-worthy…see what I did there? “see”-worthy?

For Buccaneer Bunnies, I made the following lists:

Puppets or a lack thereof!

Puppet-ectomies: This means, getting stuffed animals and turning them into puppets. Simply cut ’em open, pull out stuffing, et voila! If you want a moving mouth, that, too is easy. You can cut open the mouths, and add plastic cut from a soda bottle, hot glue it in and you’ve got a moving mouth. No sewing needed.

Props or a lack thereof!

Let’s take it by the numbers:

At the start of the show, I always start out in costume facing the audience. I then lead them in a “pirate dance”. This takes a few minutes.

Then! I have a colleague lead the audience in pirate vocabulary as well as the parts of the ship. This is while volunteers and I are preparing behind the stage. The last part of the ship (and also our cue to get ready), is the poop deck, which always solicits a laugh.

So far, that’s about 15 minutes

Start the show! Always have a 30 second introduction, with music, and signs much like credits at the start of a movie. Trust me, any chance to stretch a puppet show is worth it when making it EPIC!

For this show, I made an opening scene based on an old Sesame Street short: Bert and Ernie goe fishing:

In our situation, we’re going to be using bunnies instead of Bert and Ernie. You can use Y2Mate or similar program to grab the audio and or video – it is also a great converter of file types.

I then made a rap sequence based on the one from Robin Hood: Men in Tights, but adapted it to match Buccaneer Bunnies:

Then! I took some parts of an old Blackadder script to make a dialogue between the pirate crew before introducing our main characters. I used staff, volunteers and even a UPS driver with a great Spanish accent to record the voices.

After that, I launched into the story, almost word for word from the picture book

To make it longer still, when Blackear is berating our hero, I added a sea shanty borrowed from Muppets Treasure Island, specifically Professional Pirate!

Launching back into the story, I finished up with a whole cast “dance” routine to the tune of Hot Wings from the hit movie Rio:

And to finish up your program, a pirate craft of your choosing and or root beer, ginger ale and other piratical refreshments.

Yes, I have the audacity to pull something like this off. However, when I say “audacity”, I really mean “Audacity“, which is a free audio tool for putting all of your sound effects, music and dialogue together in one handy-dandy recorded puppet show. Audacity has no viruses, no ads, and no “please buy the full version”, so it’s as close to perfection as possible. Here’s a screen shot:

As always, reach out for help. If you would like to hear the recording or see more photos, just shoot me an email: jonathan.dolce@mylakelibrary.org

Have fun out there!