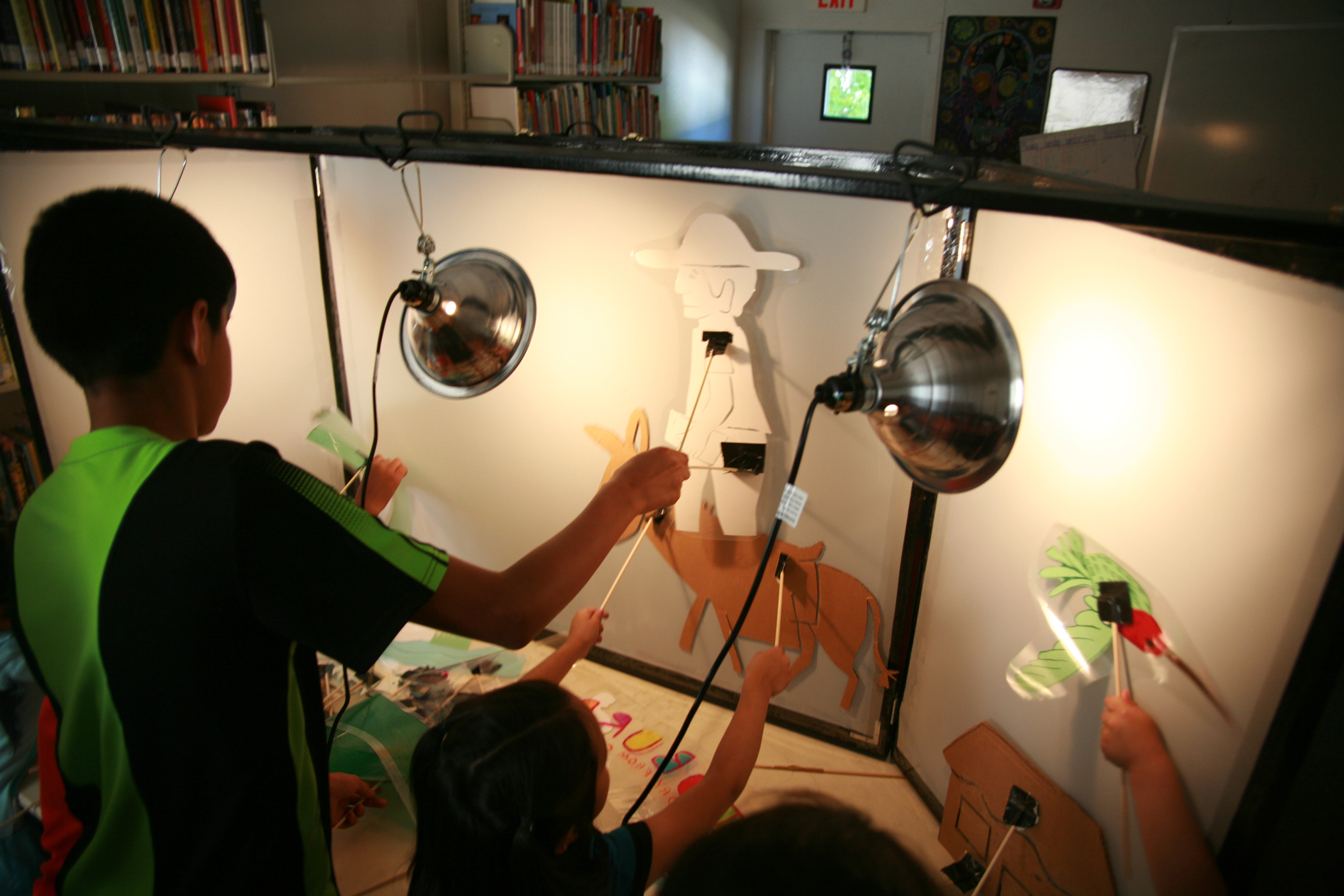 Honestly, there are no excuses for not being able to make a shadow puppet show. I’m not talking using your fingers to make that barking dog or your hands to make a butterfly. Shadow puppets are almost as easy to make, economical, easy to store, and frankly an art form in themselves. And thanks to the magic of internet and photocopiers, ANYONE can make these. Let’s dive in!

What is a shadow puppet?

A shadow puppet is any character, prop or background, made of almost any 2-D material that casts a shadow on another flat surface/curtain. It is a silhouette of a character, or object that helps you tell a story. Shadow puppets can be opaque, translucent, transparent, and include color. Any open areas “holes” or negative space as we say in the art world, allow light through. These areas can have color added with colored tissue paper, or with transparencies you’ve added color to with Sharpies. [remind me to make at least one “stab in the dark” joke somewhere in this post]

“But I can’t draw!” you cry with derision. No excuse. Anyone with an internet connection and a printer can make a shadow puppet worthy of your next show.

Shadow puppets can be made from almost any material. The materials I’ve had the best success with are:

Any color of cardstock or foam sheets will work. They do not need to be black.

Exciting Example (no, really) — Los Gatos Black on Halloween by Yuyi Morales and some other person – um, Marisa Montes

So, Los Gatos Black on Halloween is an excellent story to bring to life via shadow puppetry. It’s got very clearly defined (pun intended) characters/icons that you can find countless examples of on Google Images. Moreover, it’s a Belpre award winner, so you really can’t miss!

Here’s your basic cat. It’s made of foam, a piece of re-usable shopping bag, the top of a disposable plastic cup, a bamboo skewer, four staples and tape.

Procedure: find cat silhouette on Google images. Print it out. Trace it onto a foam sheet and cut out. Add stick with tape. Yes, the tail flops everywhere, so secure it with a stiff piece of plastic, like the top of a disposable cup like I did. Add green eyes by cutting out a piece of colored plastic and staple it in place. Et voila, you’ve got a cat shadow puppet!

These characters will simply photocopied onto a transparency. This is arguably the easiest shadow puppet known to librarian.

Make a jointed shadow puppet by cutting the puppet at a point of articulation. Then put it back together again with a brad. Use two bamboo skewers so you can move it around.

In the old days, we made shadow puppets out of cardstock. My joints ache just thinking about all that cutting. If you are so inclined, have at it. Laminate them for longevity; the puppet’s longevity, not yours.

This one’s a little fancier. I added a spinny element in the middle made out of two disposable plastic/clear cup bottoms placed back to back and held in place with a brad. Thus, the ghosts can be made to spin during your show. Clever, huh?

Here’s the soundtrack I made for the show: Los Gatos Black on Halloween soundtrack

If those links fail for whatever reason, shoot me an email and I’ll hook you up.

A shadow puppet show can be performed using a bedsheet and some really bright lights. You can use, as I usually do, a puppet stage with a white shower curtain attached with clothespins. If you want to be extra fancy, you can make a shadow puppet stage, as below from a workshop and performance we did in north Georgia:

And here’s the whole Biblioburro show. The children made the puppets, performed it and their voices tell the story — Biblioburro shadow puppet story

Please let me know if you have any questions — I am more than happy to help!