June is quickly approaching, and that means it’s time to seek out those Pride Month picks to share (whether digitally or physically) with your young patrons! While there are quite a few great LGBTQ+ titles for children out there – with more hitting shelves every year – I’ve taken the time to select some of my favorites to share here. 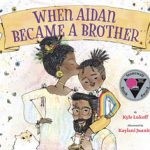 When Aidan Became a Brother by Kyle Lukoff

A picture book that’s sure to take you on an emotional roller coaster ride, When Aidan Became a Brother is the story of one young transgender boy’s excitement and terror over becoming a big brother. While Aidan is all too happy to learn his parents are having a baby, he soon starts to worry that all the things that hurt him – from being misgendered to having a name that didn’t fit – will also hurt his new sibling. But thanks to some gentle assurance from Mom, Aidan is soon ready to be the best big brother ever.

It Feels Good to Be Yourself: A Book about Gender Identity by Theresa Thorn 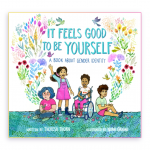 A non-fiction picture book geared toward children 3-9 years old, this title tackles gender identity in the simplest yet sweetest way, providing a jumping-off point into a topic many caregivers find daunting. With artwork reminiscent of From the Stars in the Sky to the Fish in the Sea (2017) and extensive back matter, I highly recommend adding It Feels Good to Be Yourself to your collection if you don’t already have it. 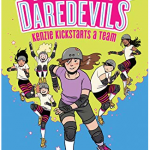 Strong female role-models, a totally kick-butt sport, and a solid cast of young women struggling with friendship, first crushes, team dynamics and more? Seriously, if you’re not already reading Kit Rosewater’s books, I don’t know what else I can say to convince you. While Kenzie’s story is definitely my favorite of the two out in the world thus far, Shelly’s (which hits shelves in September) picks up pretty much right where Kenzie’s left off and is a strong follow up for fans of the first in the series.

A High Five for Glenn Burke by Phil Bildner 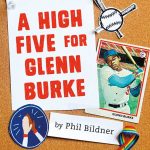 When sixth grader Silas Wade decides to do a school presentation on former Major Leaguer Glenn Burke – the first openly gay MLB player and inventor of the high five – only Silas knows the full story: This is his own first step toward coming out. But when he starts to feel as though he’s revealed too much too soon, Silas’s efforts at covering things up quickly backfire. A big-hearted middle grade read brimming with emotion, A High Five for Glenn Burke is sure to make you cry – in the best way. 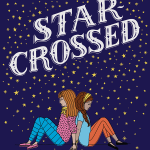 Star-student Mattie is equal parts thrilled and terrified to be playing Romeo opposite her crush in the eighth grade’s Shakespeare production. Gemma Braithwaite may be new to school, but she’s got it all: brains, looks, personality, an amazing British accent – and, of course, Mattie’s devotion. As everything in Mattie’s life becomes more dramatic, will she learn to take the lead both on and off stage?

Looking for more Pride Month book recommendations or ideas for how best to support your LGBTQ+ population? Check out these resources: