Many public libraries keep a pet of some sort. I have seen fish, hamsters, guinea pigs, library beehives, and who can forget the most famous library cat, Dewey Readmore Books, from the Spencer Public Library in Iowa. We keep a different kind of pet at the Santa Clarita Public Library. We keep worms!

And we’re not just talking about one or two worms! We have a whole bin full of wiggly red worms! You may be familiar with regular composting, where kitchen scraps, grass clippings, dried leaves, and other natural elements are broken down to produce a rich humus that is fabulous for garden beds. Vermicomposting works on the same principle, except that worms help to break the food down even faster! Vermicomposting is an excellent way to keep kitchen scraps out of the industrial garbage cycle, and it is super easy to maintain in small spaces, which makes it a great option for apartment dwellers, and, as it turns out, libraries!

My first introduction to library vermicomposters was at the Mt. Lebanon Public Library in Pittsburgh, PA, where our worm bin was kept right under the reference desk! When I started working at my library last year, as a transplant from the wild weather of Pittsburgh to the mild climate of southern California, I convinced my ever amenable managers to start our own bin, and the fun began!

I purchased a vertical vermicomposter online so that it would look nice, as our bin was going to be visible to the public, but you can make your own easily. The EPA has a nice tutorial, as does the Rodale Institute.

We invited the public to join us in setting up the worm bin, and from the start, the kids were fascinated! Some were a little anxious to handle worms at first, but most lose their inhibitions and dig in. We decided to make Feed the Worms a quick weekly program. Each week we save fruit and veggie scraps in a counter top compost bin back in our staff kitchen, and I blend these up in a food processor that I brought from home. If we have a particularly big batch, I freeze the leftovers and use that to feed the worms on weeks that we don’t have quite as much in the compost bin.

During the actual program, I just open the worm bin and let the kids get their hands dirty and handle the worms. This is the most fun part! There are squeals, shrieks, and laughter. The worms are fascinating, and they tickle a bit when they crawl over skin. My favorite part is telling the kids that the dirt that they’re playing in is actually worm poop! After everyone has had sufficient time to handle the worms, the kids dig a hole in the bin and everyone gets a turn to plop in spoonfuls of the food scrap goop. It is not pretty at all, but that is part of the fun. We cover the worms back up and they are set for another week!

Vermicomposting is an easy, entertaining and inexpensive STEM activity that will generate good soil as well as great relationships with your public! We’ve had some media coverage of our bin and we have been live streaming worm feedings weekly during our quarantine, which you can check out on our Facebook page. Additionally, we will be composting some of the leftover food scraps as we participate as a host site in California’s Lunch at the Library this summer!

Give worms at try at your library! 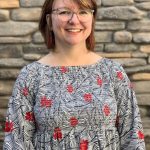 Today’s guest blogger is Liza Purdy.  Liza is a children’s librarian at the Old Town Newhall branch of the Santa Clarita Public Library.

This blog relates to the ALSC Core Competency of: Programming Skills.