Here we are, almost to May, and for most of us my comment about existing in a semi-limbo is just as relevant today as it was last month. But even during this strange time of social distancing, remote library services, and updated disinfecting practices, we’re all still here, doing our best to serve our communities while staying safe and healthy. As a collection development librarian, “doing my best to serve my community” mostly entails purchasing e-books, creating booklists, and sharing electronic book recommendations and resources. So that’s what I’m going to share yet again this month, in the hope that my book recommendations will be useful for at least some of you.

For this post, we’re celebrating Asian/Pacific American Heritage Month (which is just around the corner). Below you’ll find some of my favorite titles for a range of ages as well as great lists to check out from other recommendation sources. 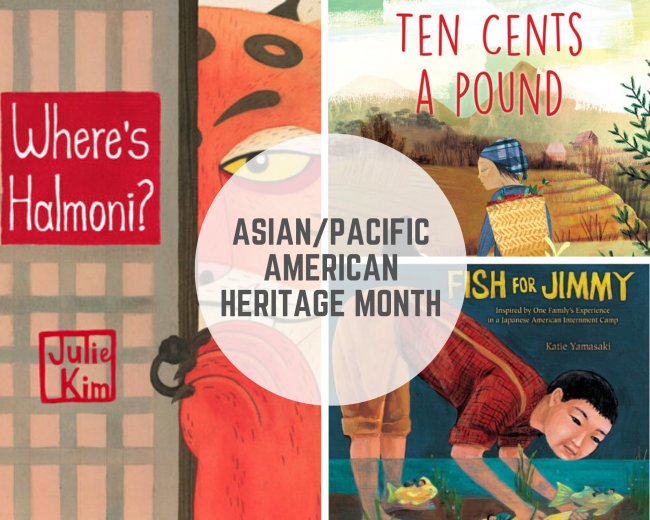 Mayumi visits Japan every summer, where she and her grandfather tend his rock garden together. Until one summer when everything changes, and Mayumi worries she won’t be able to keep the memory of their rock garden alive anymore.

Let Me Finish! by Minh Lê

A group of noisy animals keep ruining the endings to the books a young boy is reading. While nothing could top the heartfelt beauty of Drawn Together, Minh Lê’s debut is a laugh-out-loud romp perfect for fans of Jon Klassen and Adam Rex.

Fish for Jimmy by Katie Yamasaki

Inspired by the experiences of Yamasaki’s own family, Fish for Jimmy tells the story of two brothers sent to a Japanese American internment camp. When younger brother Jimmy loses his appetite, older brother Taro sets out to catch fresh fish for Jimmy – not only to feed him, but to remind him of their life before internment and provide hope for the future.

This simple, lyrical picture book is told as a conversation between a young girl, who is nervous about travelling far from home in order to attend school, and her mother, who has sacrificed a lot in order to give her child a better life. This one’s a double whammy, as it would also make an excellent Mother’s Day recommendation.

In this classic Hans Christian Anderson tale with a twist children are sure to enjoy, Ming Da, the boy emperor, realizes his advisors are stealing from his people, leaving them poor and hungry – so he devises a plan to outsmart them.

A fun, heartfelt new young reader series for fans of Junie B., Ivy and Bean, and Clementine. In the first book, Mindy and her dad have just moved to a new town after her mother’s death. All Mindy wants is to fit in at her new school, get a puppy, and have her dad be happy. She’s pretty sure the puppy will make everything better, if she can just figure out how to afford one…

Another great series for fans of quirky female characters, Debbi Michiko Florence has created a world readers will want to snuggle into. Jasmine is determined, feisty, and funny, her extended family is warm and accepting, and each title introduces readers to elements of Japanese culture.

Book Uncle and Me by Uma Krishnaswami

Nine-year-old Yasmin borrows a book from Book Uncle, a retired teacher with a free lending library cart beside her apartment building, every day. But when the mayor makes shutting the library down part of his re-election plan, Yasmin decides it’s time to put down her books and pick up a megaphone. A perfect title to introduce young readers to politics and empower them to use their voices.

Two young siblings go on a search for their missing grandmother, ending up inside a world inspired by Korean folklore. This is a beautifully illustrated, fun adventure story told as a beginning graphic novel.

The Science of Breakable Things by Tae Keller

When Natalie’s teacher suggests she enter an egg drop competition, she’s sure this is the solution to all her problems. If she wins, not only will she pass her science class but she can use the prize money to fly her botanist mother to see the miraculous Cobalt Blue Orchids – flowers that survive against impossible odds. Then her mother won’t be depressed anymore, and everything will be perfect again – right?

After twelve-year-old Harper Raine learns her new home is haunted, she begins to notice her little brother is acting strangely. And as an evil spirit slowly overtakes him, Harper’s memories of the traumatizing events that led to the family’s move resurface – leading her to realize that only she can save them all from the danger they’re in.

A Pakistani-American Muslim girl who prefers to blend into the background struggles with a desire to maintain connected to her culture while also fitting in at her largely white school. Then the local Islamic Center is vandalized. Can Amina find her voice in such a confusing world?

The Crystal Ribbon by Celeste Lim

Eleven-year-old Li Jing was just a farmer’s daughter – until she became a child bride, sold off and married to a three-year-old boy in order to save her own impoverished family. But when her new “family” faces a financial crisis and decides to sell her again, that’s the last straw – and so begins a magical journey of self-discovery, adventure and danger perfect for fans of Pam Muñoz Ryan.

Yumi Chung is 100% ready for her Netflix stand-up special. But instead of spending the summer studying her favorite YouTube comedians, she’s stuck in a test-prep tutoring program – until she stumbles upon a comedy camp for kids taught by her favorite YouTuber.