Like so many other libraries, our youth services department enjoys a large after-school crowd of Roblox-loving tweens. To cope with our slightly captive audience we have been working towards including more short, inter-departmental “guerilla” programming that takes advantage of our sudden influx of restless tweens in the evenings. One such recent program was a lightning round, Mock Caldecott event. 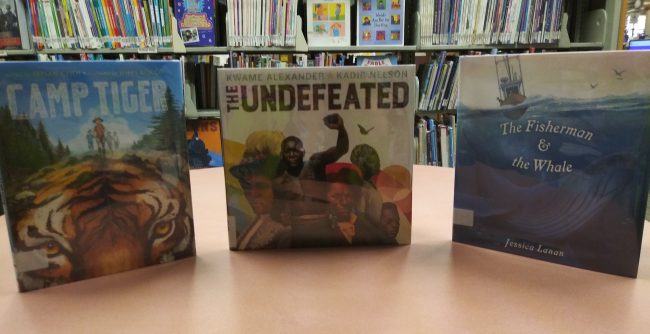 When I was developing the program, I wanted to create something meaningful that could be packaged into a more digestible, in-department program. My main goal was to strengthen the participants’ visual literacy and critique skills, but I knew that the tweens I work with would be reluctant to engage in lengthy discussion or sit through a reading (not that these aren’t worthwhile or wonderful things to do with this age group), so I had to get creative. Simply voting on the books didn’t seem like it would really achieve what I wanted, so I devised a three round “Lightning Mock Caldecott”.

After a brief introduction of the Caldecott award, with candy thrown around for correct answers to questions like “what does illustration mean?”, “what are endpages and gutters?”, and  “where do we keep these books in our library?”, we launched straight into the first round of the game. For the first round, everyone chose a sheet of stickers and walked around tables looking at only the cover and the end pages of the seven picturebooks set out. After looking closely, they placed their sticker on the printed scale by each book to indicate if they thought the book’s cover and endpages illustration needed work, was excellent, or somewhere inbetween. 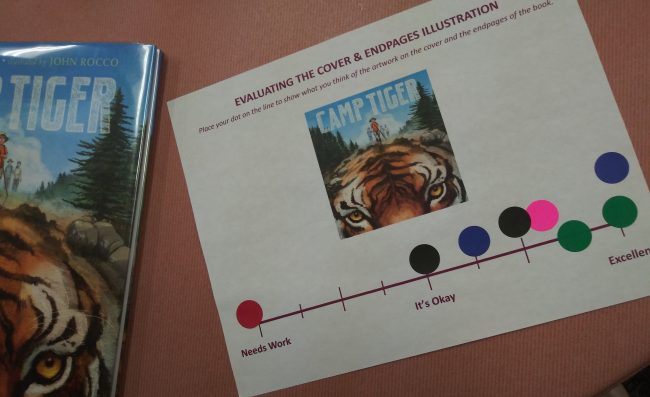 After everyone had evaluated the books for the first round – and gotten a piece of candy – we regrouped in preparation for round two. This time they were allowed to look inside the books to evaluate the artwork. We talked briefly about some different components to pay attention to such as color, texture, space, composition, and media choices using past Caldecott winners as examples. Everyone was turned loose with their stickers again and fresh sheets that allowed them to note their evaluation of the inside artwork. 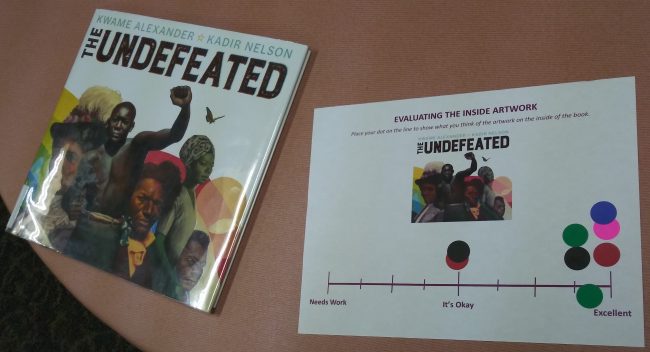 Discussions on this round were a lot deeper now that everyone had a better feelings of the process and the books. It was helpful to prod those that finished early to explain their thought process and start mini debates on the merits of one book over the other. Even some tweens that are usually more reserved were getting into it and contributing critiques that were spot-on.

For the third round, we set about actually voting now that we had become familiar with all the books and had turned on our “critical eye”. Everyone got three colored strips of paper to denote their first, second, and third choice and placed them in corresponding jars by the books. There was lots of second guessing now that everyone had developed a fondness for many of the choices, and some rushed back to change their choices after discussion around the candy bowl. 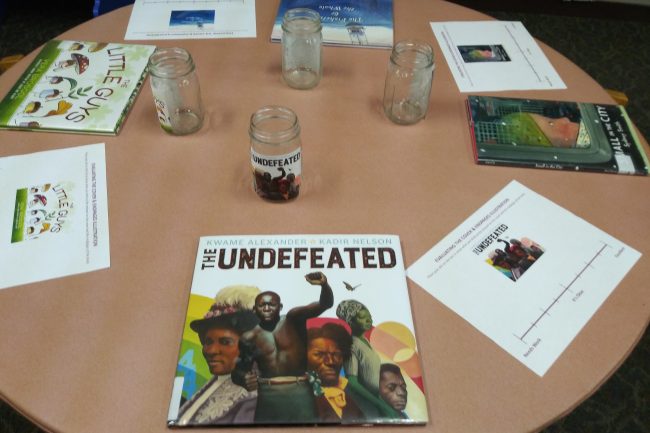 While I tallied votes (first choice = three points, second choice = two points, third choice = one point), everyone dispersed to their usual after-school stations followed by a quiet celebration, with the plan to do some follow-up after the Caldecott is announced. Our gold medal winner was “The Undefeated” by Kwame Alexander and illustrated by Kadir Nelson and our two honor choices were “The Fisherman & The Whale” by Jessica Lanon and “Camp Tiger” by Susan Choi, illustrated by John Rocco.

Overall, I felt that the majority of the tweens achieved my objectives for the program as they were able to articulate what the Caldecott was given for, name different elements of quality picturebooks illustrations, and become familiar with different elements of art critique. Most importantly though, they enjoyed the program! I can’t wait to see how this quick (only twenty minutes!) program evolves next year!

Today’s guest blogger is Jacqueline (Jacquie) Kociubuk. Jacquie is a Youth Services Librarian with the Warren-Trumbull County Public Library where she works with underserved children and families and a researcher with Project VOICE, an IMLS-funded grant. Her research is centered around inclusive experiences in children’s literature and library programming, non-traditional learning environments for children and youth, and public library outreach.

Please note that as a guest post, the views here do not represent the official position of ALA or ALSC.