As a children’s librarian, I get lots of questions. One reoccurring question I often get from kids is, “What book should I read after I have read all of Raina Telgemeier?”

I not only get this question from kids, but I also get it from parents and educators too! So if you have a kid or parent that needs some fresh read-alikes, this post is for you. Here are my top twelve books to read after you have read all of Raina Telgemeier’s work. 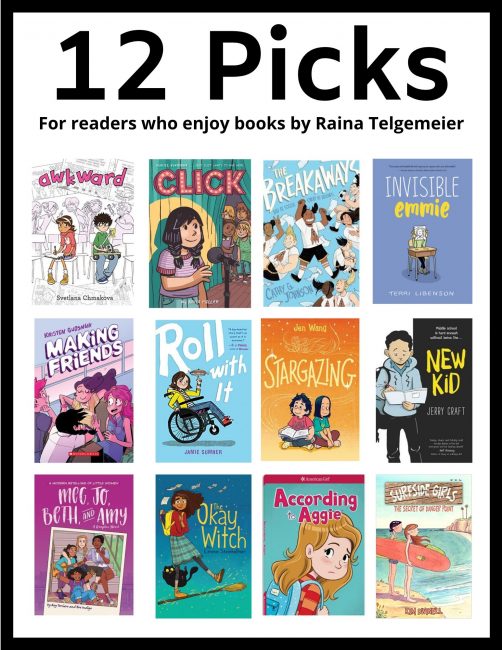 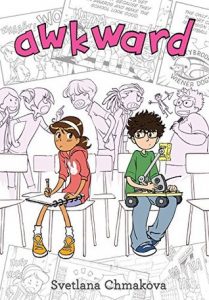 On her first day at her new school, Penelope–Peppi–Torres trips into a quiet boy in the hall, Jaime Thompson. Peppi is teased and called the “nerder girlfriend.” How does she handle this crisis? By shoving poor Jaime and running away!

Peppi feels ashamed about the way she treated Jaime. Things are already awkward enough between the two, but to make matters worse, he’s a member of her own club’s archrivals–the science club! When the two go to war, Jamie realizes that there are no rules in middle school. 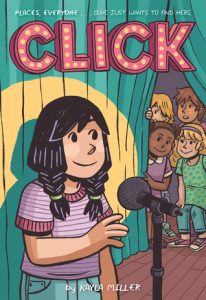 Olive “clicks” with everyone in the fifth grade—until one day she doesn’t. When a school variety show leaves Olive stranded without an act to join, she begins to panic, wondering why all her friends have already formed their own groups . . . without her. With the performance drawing closer by the minute, will Olive be able to find her own place in the show before the curtain comes up?
Author-illustrator Kayla Miller has woven together with a heartfelt and insightful story about navigating friendships, leaning on family, and learning to take the stage in the most important role of all.

The Breakaways by Cathy G. Johnson 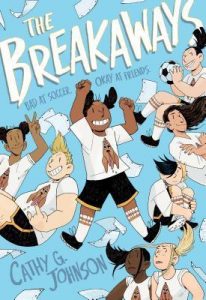 Quiet, sensitive Faith starts middle school already worrying about how she will fit in. To her surprise, Amanda, a popular eighth-grader, convinces her to join the school soccer team, the Bloodhounds. Having never played soccer in her life, Faith ends up on the C team, a ragtag group that’s way better at drama than at teamwork. Although they are awful at soccer, Faith and her teammates soon form a bond both on and off the soccer field that challenges their notions of loyalty, identity, friendship, and unity.

The Breakaways is a raw, and beautifully honest graphic novel that looks into the lives of a diverse and defiantly independent group of kids learning to make room for themselves in the world. 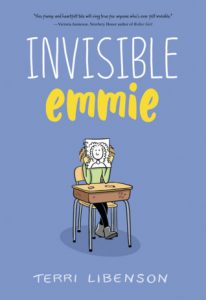 This is the story of two totally different girls—
quiet, shy, artistic Emmie
popular, outgoing, athletic Katie
—and how their lives unexpectedly intersect one day, when an embarrassing note falls into the wrong hands. . . .

All the crushes, humiliations, boredom, and drama of middle school are compressed into one surprising day in this extraordinary novel. 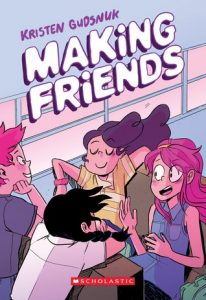 Sixth grade was SO much easier for Danielle. All her friends were in the same room and she knew what to expect from her life. But now that she’s in seventh grade, she’s in a new middle school, her friends are in different classes and forming new cliques, and she is completely lost.

When Danielle inherits a magical sketchbook from her eccentric great aunt Elma, she draws Madison, an ideal best friend that springs to life right off the page! But even when you create a best friend, it’s not easy navigating the ups and downs of relationships, and before long Danielle and Madison are not exactly seeing eye-to-eye.

To make matters worse, Danielle has drawn the head of her favorite (and totally misunderstood) cartoon villain, Prince Neptune. He’s also come to life and is giving her terrible advice about how to make people like her. When she rejects him and he goes on a rampage during a school pep rally, Danielle and Madison have to set aside their differences to stop him!

Roll With It by Jamie Sumner 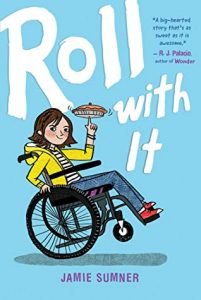 Ellie’s a girl who tells it like it is. That surprises some people, who see a kid in a wheelchair and think she’s going to be all sunshine and cuddles. The thing is, Ellie has big dreams: She might be eating Stouffer’s for dinner, but one day she’s going to be a professional baker. If she’s not writing fan letters to her favorite celebrity chefs, she’s practicing recipes on her well-meaning, if overworked, mother.

But when Ellie and her mom move so they can help take care of her ailing grandpa, Ellie has to start all over again in a new town at a new school. Except she’s not just the new kid—she’s the new kid in the wheelchair who lives in the trailer park on the wrong side of town. It all feels like one challenge too many, until Ellie starts to make her first-ever friends. Now she just has to convince her mom that this town might just be the best thing that ever happened to them!

Moon is everything Christine isn’t. She’s confident, impulsive, artistic . . . and though they both grew up in the same Chinese-American suburb, Moon is somehow unlike anyone Christine has ever known.

When Moon’s family moves in next door to Christine’s, Moon goes from unlikely friend to best friend―maybe even the perfect friend. The girls share their favorite music videos, paint their toenails when Christine’s strict parents aren’t around, and make plans to enter the school talent show together. Moon even tells Christine her deepest secret: that she sometimes has visions of celestial beings who speak to her from the stars. Who reassure her that earth isn’t where she really belongs.

But when they’re least expecting it, catastrophe strikes. After relying on Moon for everything, can Christine find it in herself to be the friend Moon needs? 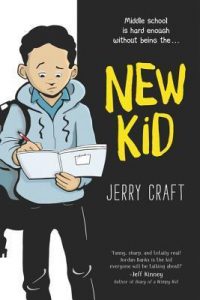 Seventh grader Jordan Banks loves nothing more than drawing cartoons about his life. But instead of sending him to the art school of his dreams, his parents enroll him in a prestigious private school known for its academics, where Jordan is one of the few kids of color in his entire grade.

As he makes the daily trip from his Washington Heights apartment to the upscale Riverdale Academy Day School, Jordan soon finds himself torn between two worlds—and not really fitting into either one. Can Jordan learn to navigate his new school culture while keeping his neighborhood friends and staying true to himself? 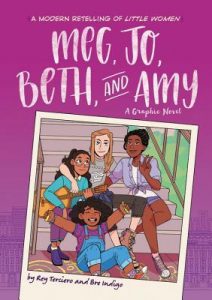 Meg, Jo, Beth, and Amy are having a really tough year: Not only is their father overseas with the military and their working overtime to make ends meet, but each girl is struggling with her own unique problems. Whether it’s school woes, health issues, boy troubles, or simply feeling lost, the March sisters all need the same thing: support from each other. By coming together–and sharing lots of laughs and tears–these four young women find the courage to discover who they truly are as individuals…and as a family.

The Okay Witch by Emma Steinkellner 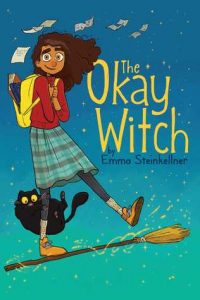 Magic is harder than it looks.

Thirteen-year-old Moth Hush loves all things witchy. But she’s about to discover that witches aren’t just the stuff of movies, books, and spooky stories. When some eighth-grade bullies try to ruin her Halloween, something really strange happens. It turns out that Founder’s Bluff, Massachusetts, has a centuries-old history of witch drama. And, surprise: Moth’s family is at the center of it all! When Moth’s new powers show up, things get totally out-of-control. She meets a talking cat, falls into an enchanted diary, and unlocks a hidden witch world. Secrets surface from generations past as Moth unravels the complicated legacy at the heart of her town, her family, and herself.

In this spellbinding graphic novel debut, Emma Steinkellner spins a story packed with humor and heart about the weird and wonderful adventures of a witch-in-progress.

According to Angie by Mary Richards Beaumont 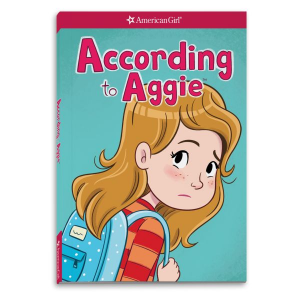 As far as 11-year-old Aggie knows, everything is great. Friends, school, family…all are fine and fun and predictable. But one random day, Aggie’s longtime friend Fiona starts to pull away, canceling plans and acting, well, kind of different. It’s not like anything happened–or did it? There aren’t any good answers, and Aggie is left wondering how she’s supposed to act now that her friend seems to have moved on without her. It turns out, though, that new friendship can turn up just when you need it most. 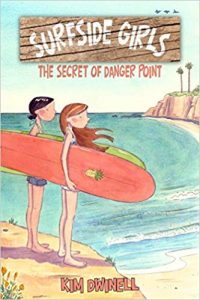 Things are getting weird in Surfside. Lately, Samantha’s best friend Jade explodes into fits of giggles whenever she sees a boy, and it’s throwing a wrench into the kick-back summer of surfing and hanging out that Sam had planned. But after swimming through a secret underwater cave, Sam starts to… see things. Like ghosts. And pirates. And maybe something even scarier! Can she and Jade get to the bottom of this mystery in time to save their town?

Besides these great titles, don’t forget other favorite graphic novels like The Babysitter’s Club series by Ann M. Martin and illustrated by Raina Telgemeier, The Cardboard Kingdom by Chad Sell, and books by Jennifer Holm, Victoria Johnson, and Shannon Hale.  If your tween is willing to try a book in verse, the book Emmy in the Key of Code by Aimee Lucido is great too!