It’s easy to get excited about Banned Books Week, to cheerlead the freedom to read and make displays of titles that will make a jaw drop “How could that book have ever been banned?”

Banned Books Week 2019, the annual celebration of the freedom to read, will be held September 22-28

As I got to working onI my banned books display this September (and yes I did create an eye catching display– credit to all the brilliant people that did it before me on Pinterest).

I got to asking a few questions–

How accurate is it that these books were “banned” or “challenged?”

What exactly am I trying to accomplish with this banned books display?

The ALSC Intellectual Freedom Committee has done some great blog posts that look deeper at the meaning of banned and challenged books, how you can productively incorporate them into p 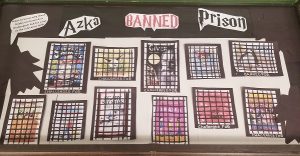 rograms and how to check what is real versus “fake.”

ALA’s Office of Intellectual Freedom (OIF) has a great annually updated list of frequently challenged books in libraries, schools and the media.

However, as quoted from the advocacy website “The Top Ten lists are only a snapshot of book challenges.Surveys indicate that 82-97% of book challenges – documented requests to remove materials from schools or libraries – remain unreported and receive no media.”

Some discussion questions from Justin Azevedo that I thought were very helpful as a starting point are:

As you and your library are celebrating the freedom to read this month I encourage you to think deeper about how you can increase accurate awareness about banned and challenged books.