Easy readers, more specifically, easy reader series are one of the most requested items at my branch. Children have their favorites that they often ask for– Paw Patrol! Lego! Superheroes! Princesses! And parents ask constantly for recommendations for books on their child’s age level or reading ability. 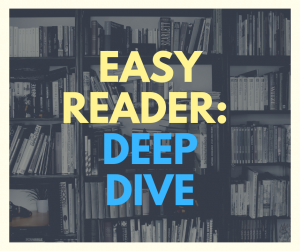 They are super accessible to children since they are thin, with larger text, and lots of them feature characters that children love. It is important to look critically at them because they are so often the real introduction to a child’s literacy development. And it’s 2019, let’s look critically at everything children consume– we are all (hopefully) much more aware and “woke” now.

I make recommendations constantly for interest and reading level, and adults are more often asking for diversity in their reference inquiries.

And yet? I have hardly really read any of them.

So, this year as part of my personal improvement goals, I decided to do the unheard of, to willingly read through every Easy Reader series that we had (117 total), and come up with some staff/user guides for them.

I decided to look at three books from each Easy Reader series to give myself a real sense of the series, especially trying to read the first book if it was possible. I created a spreadsheet to keep track, adding in the titles and levels marked. Then I added the synopsis, characters, diversity– both in race, gender, and idenitiy; readalikes, as well as any notes I had.

I am just starting to mine through the data, and my humongous spreadsheet, and would like to take some time to share some insights with you all.

Keep in mind that I am using Easy Reading series as defined in my system— they may be listed as series or as not series depending on your cataloging preferences. I also didn’t list authors since they change a bit.

Diego (based on TV character)

Doc McStuffins (based on TV character)

Dora (based on TV character)

Overall, not only are the above characters and stories diverse, but they also feature lots of other diversities— big families being included, biracial families, female careers– moms that work, dads being more involved in caregiving, etc.

Most of Movie/TV series (we put them together)

We Both Read & Phonics—depending on book

Overall, these titles are still pretty white, but there is some room/ uncertainty in race represented. Lots of the series have black families represented– but only in their selected tales. However, race seemed a bit other-ness since it was separated out so much in them. I do love the Real Kids Reads books– the pictures look like they are done in 90s, but a lot are really cute.

Amelia Bedelia (both the old and new)

Overall, these titles are pretty white. I feel like a lot of them treat diversity how most children’s literature seemed to see it in the 90s– like cool to have around, but not necessary. (Boo!) It is upsetting that the new Amelia Bedelia’s are just as racially diverse as the old ones! LEGOs are tricky– they are yellow. But some characters in different stories are darker colored– is that supposed to be a different race? I don’t know for sure. Pokemon was also a challenge– technically, they feature some Asian characters, however, they feel very whitewashed to me.

Overall, not surprising that lots of the sports/adventure stories featured all-male worlds. I wondered if this is where all the hatred boys have for reading anything but “boy books” starts. Maybe have a few females in these books, writers, just to mix it up.

Max and Ruby—Females are stern, controlling

Mr and Mrs Green— Wife is always cooking, cleaning, while husband naps and gets into trouble

My Weird School—  Weirdly anti-girl, lots of love plots—girls are in object role

We Both Read & Phonics— stereotypes of bullies, nerds, body types

Overall, there was a lot of weird stuff happening in some of these books. I love the We Both Read books– they are my favorites to recommend to parents/adults, but there are lots of stereotypes have nerds, bullies, body size, etc. It made me rethink some recommendations. I also did not like how many of these stories had already sexualized females that were just there as objects for men… ugh. A 3-5-year-old does not need that message. These easy readers made me really think about how women are depicted in these stories, so many moms are constantly cleaning, cooking dinner, taking care of home and children… while dads are detached or left out completely. Maybe this is why women still take on 65% or more of household labor.

White, but characters are diverse in gender, culture:

Overall, these two series stood out to me because they had characters who weren’t of the “norm” for easy readers. Pinky is a boy that loves pink. Rex is a girl that loves dinosaurs. Charlie and Mouse feature children of indeterminate gender identity. I don’t personally think either of these series are “special” but after everything I have read, I had to point them out. SO many of the easy readers use very basic stereotypes about boys and girls that it feels special to see anything else.

Thanks for reading this long post. As I delve more into Easy Reader series, I will hope to share more insights. I feel like I have been going on a journey this past year, and I have uncovered much, but hope to learn more.

This post addresses the ALSC Core Competency of Knowlege Curation and Management Materials.