Librarians are experts at reader’s advisory. We read in our spare time to do a better job while we are on the clock. So when it comes to holiday book ideas, librarians are the experts. Unlike bookstores and retailers, librarians are free agents whose only interest is helping to connect readers to the right book. They can help the most reluctant reader become passionate about books. Librarians can even help the most challenging group of readers-tweens.

As the year comes to a close, it is a great time to take a look back at some of the best books of the year. These books would make an excellent gift for a tween or educator in your life. If not a gift, these books are worth adding to your to-read pile. 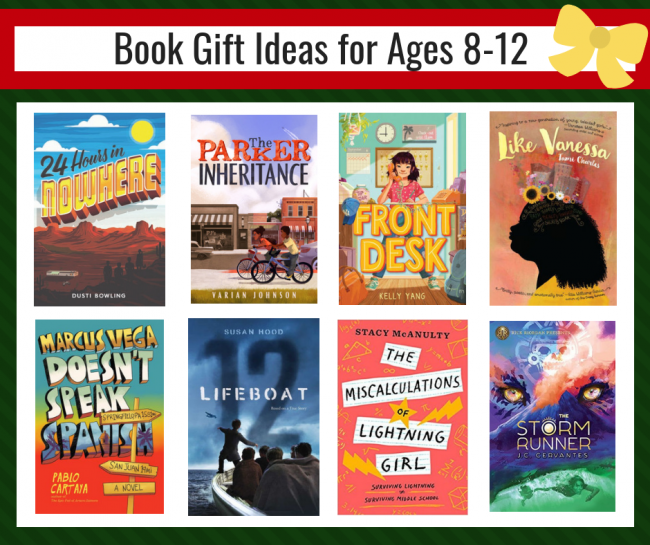 24 Hours in Nowhere by Dusti Bowling 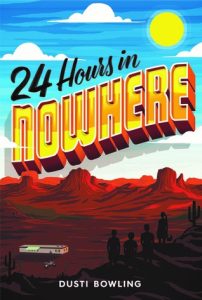 Thirteen-year-old Gus lives in Nowhere, Arizona. His life in Nowhere is miserable, and it is made even worse by Bo Taylor who is Nowhere’s biggest bully. When Bo forces Gus to eat a spiky cactus, Rossi Scott comes to his rescue. She is one of the best racers in town, and she gives up her racing bike to save Gus. Gus vows to get her racing bike back for her before Nowhere’s biggest bike competition.  To have enough money to repurchase it though, Gus must go to an abandoned mine to find a lost treasure. The shaft is known to collapse, and Gus only has 24 hours to get it. Can Gus make it?

This exciting survival story is more than a page-turner, it is also heartfelt. Readers lucky enough to read this title will have a difficult time not finishing this page-turner in 24 hours.

The Parker Inheritance by Varian Johnson 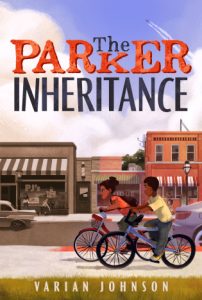 Candice’s grandmother was known for being the city official who ordered the town to dig up a tennis court because she thought there was treasure buried there. When no treasure was found, her grandmother left her job in a cloud of shame. After her death, Candice and her mother spend the summer cleaning out Candice’s grandmother’s house. Candice discovers letters that describes an injustice that happened to a woman named Siobhan Washington. She must follow the notes to unravel the mystery and find the treasure that her grandmother desperately tried to recover. With the help of her bookish next door neighbor, Brandon Jones, the two set out to solve the mystery and redeem her grandmother’s name before summer ends. 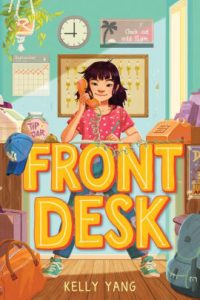 In the early 90s, ten-year-old Mia Tang and her family moved to California from China in search of a better life. Unfortunately, her parents are not able to get the same professional jobs that they had in China.  They do get jobs managing a hotel, but it is not an easy life. The owner, Mr. Yao, doesn’t treat them fairly. Mia steps in to help her parents manage the hotel, and her family even tries to help other Chinese immigrants. If Mr. Yoa finds out, however, her parents could lose everything. Based on the author’s real experience growing up, this story is full of heart that will have reader’s of all ages cheering. 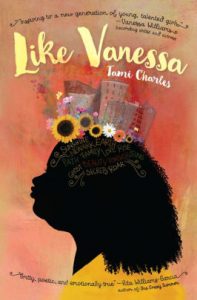 Thirteen-year-old Vanessa’s life is not glamorous. She lives in public housing, her mother is in jail, and her grandfather is struggling with addiction. Vanessa’s music teacher, Mrs. Walton, sees more in Vanessa though. Walton conveniences Vanessa to enter in their school’s beauty pageant. As Vanessa competes, her whole world begins to change. She soon realizes what real beauty is.

Both heart wrenching and inspirational, this semi-autobiographical story will be perfect for educators and tweens alike. 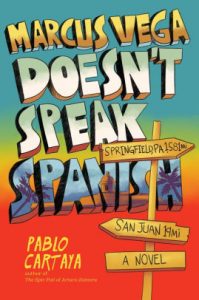 Thirteen-year-old Marcus Vega doesn’t fit in with the rest of his classmates. He is six feet tall, about 200 pounds, and is the owner of a mustache.  His appearance makes him the target of bullying. One day a fight at school leads to suspension. His mother thinks that he needs a change of environment.  She packs up and takes Marcus and his brother to Puerto Rico to spend a week with relatives he doesn’t remember or has never met. As he is there, Marcus can’t focus. His dad who left him and his family are on the island somewhere, and Marcus is on a mission to find him. What he does find might not be his dad, but will change his life. 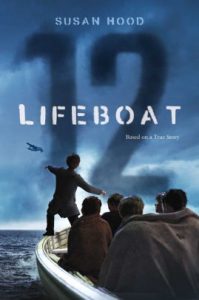 WWII is raging, and thirteen-year-old Ken Sparks is ready to leave. He is one of the lucky ones that can escape the blitz. He is one of ninety boys and girls to ship out aboard the SS City of Benares to safety in Canada.  Life on the ship is grand, but this easy life doesn’t last long. One night, his
boat gets torpedoed by the Nazis. Ken makes it to a lifeboat with five other boys. They soon realize that they are on their own. With limited food and water, Ken’s only hope of survival is to make it back to land.

Based on a true story, this gripping survival story told in verse will have readers on edge until the very end.

The Miscalculations of Lighting Girl by Stacy McAnulty 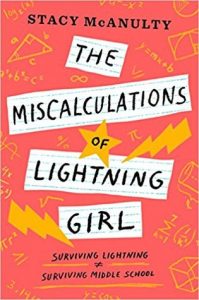 Twelve- year old Lucy has always been a little different. When she was young, she was struck by lightning.  The doctors call her condition acquired savant syndrome. This condition means that Lucy is a genius, but she also has OCD and social anxiety. Her mental health problems do not stop her from succeeding in her studies. When she completes all of her homeschool requirements to graduate, Lucy thinks she is ready for college.

Lucy’s grandmother who is her guardian knows she Lucy isn’t ready for college. She wants Lucy to try to overcome her social anxiety by being around other kids her age. Her grandma challenges Lucy to go to middle school for one year to make one friend. Lucy might be able to solve the most complex math problems, but learning to make friends and survive middle school might be the biggest problem she will ever have to answer.

The Storm Runner by J.C. Cervantes 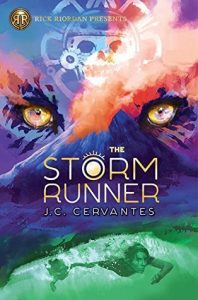 Zane has always struggled to fit in with others. He has one leg that is shorter than the other.  When kids see him, they only see a freak with a cane. Zane was lucky enough to be homeschooled, but recently his mom has forced him to go to back to school. If this isn’t bad enough, things quickly go from bad to worse when a plane crashes into the volcano near his house. A girl named Brooks shows up and tells Zane that his dad is Mayan god.  If that isn’t enough, Zane finds out that he is the world’s only hope to save it from a demon named Ah- Puch.

Other noteworthy titles: The Science of Breakable Things by Tae Keller,
Ivy Aberdeen’s Letter to the World by Ashley Herring Blake, Amal Unbound by Aisha Saeed, The Lost Books: The Scroll of Kings by Sarah Prineas, and Ghost Boys by Jewell Parker Rhodes, Charlie Hernández and the League of Shadows Ryan Calejo.

Did I miss any? Let me know what your favorite tween books of 2018 are in the comments below.