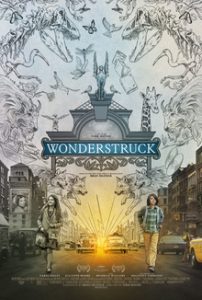 When it comes to film adaptations of middle grade novels, there are some gold standards, some incredible lows, and a vast range of movies that fall somewhere in between. Adapting his own novel for the screen, Brian Selznick’s Wonderstruck lands somewhere in the upper middle of the pack – a strong adaptation that’s just a smidge too long and a smidge too solemn to be perfect.

In its original form, Wonderstruck was split into two stories. In the 1920’s, a young, deaf girl named Rose runs away to New York City to seek out a beautiful actress she has a mysterious connection to. In the 1970’s, a boy named Ben, recently deafened by an accident, runs away to New York City to find the father he’s never met. The stories are connected, and they wind their way towards each other over the course of the book’s 600+ pages. Working from the author’s screenplay, director Todd Haynes keeps the structure of the book in more ways than one. The film also tells two separate stories that twine together, and it further mimics the book by presenting Rose’s story (a wordless, illustrated tale in the book) in the vein of a silent Hollywood Film. And like its hefty predecessor, the film clocks in at a languorous 115 minutes.

There’s a lot to appreciate about this quiet, powerful film. The New York Times named it a Critic’s Pick, saying the director “…naturally, generously brings a once-upon-a-time girl and boy to life, allowing them to find themselves — in their willfulness, their heartbreaks and their imaginings — so that eventually they can find someone else.” It’s shot beautifully, and it’s definitely a film parents will enjoy right along with their kids. If there’s a flaw in the movie, it’s that it often feels geared more towards those parents than the kids it is ostensibly produced for. The silent film portion of the movie, while beautifully shot and powerfully acted, can be incomprehensible to child viewers who haven’t read the books. At a recent R.W.D. (Read, Watch, Discuss) book group at our library, only one participant raised their hand when I asked if they understood what had happened in the silent portions of the film – and these were kids who were supposed to have read the book! Further discussion revealed that many of the kids had gotten the gist of what was happening, but all expressed dismay at “not knowing what was going on.” Too, the pace, which can move slowly due to the inter-cutting between timelines, seemed to leave some of our younger program participants behind.

Wonderstruck came out the same year as another big middle grade adaptation with “wonder” in the title, and may have suffered from that comparison in the theaters. Comparing the two movies is like comparing apples to cacti, but I like to think there is a place for each type of movie in the world of kidlit adaptations – space for both the big, shiny statement pieces and the quiet, life-affirming ones.

Have you shown Wonderstruck at your library? How was it received by kids and/or their parents? And what middle grade adaptation should we show next?