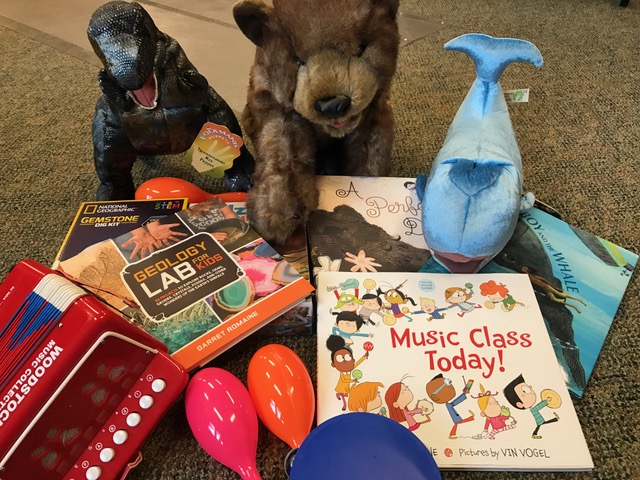 Are you learning how to play the tuba? Last week, I finished planning my school summer reading presentations. Book talks! Jokes! Music!  I was picturing musical instruments – a snare drum, a trombone, a flute! Almost like the Muppet Show from the 70s with puppets dancing and children singing. But then I remembered, I don’t play the tuba or the snare drum.  Maybe a school band would play a fun loud library song?  My goal is to make sure children are excited about reading this summer – yelling out “Libraries Rock!”

I collected a fun series of “rock” jokes, poems and songs to play and read during my presentations.

Paige’s Favorite Rock and Music Jokes:
Biggest Riddle Book in the World  by Joseph Rosenbloom and Joyce Behr.
Why did the kid roll rocks down the hill?  Answer: He wanted to see the Rolling Stones.
What kind of song is, “Soap, Soap, Soap, Soap, Soap? Answer: Five bars
What would you get if you crossed a stereo and a refrigerator Answer: Very cool music.
Website –Red Tricycle Jokes: What musical instrument is found in the bathroom? Answer: A tuba toothpaste.
What rock group has four guys who can’t sing? Answer: Mount Rushmore!

A selection of new 2018 children’s “Libraries Rock!” books and a few favorites on rifflebooks.

Highlights QUIZ: What Kind of Song Are You?  (For small groups – Take the quiz! Are you a jazz song?)

Sheila’s Favorite Songs:
Maraca Cha Cha by Monkey Monkey Music
Shake your Maracas by Sam Glaser
Tambourine or other instruments – Be part of the Band by The Verve Pipe the Family Album and Tambourine Submarine by Recess Monkey

Past ALSC Blog post – Music, Movement and Stories – An interactive early literacy storytime featuring instrument exploration, songs, fingerplays, dance and books for ages 3 and up.  The post includes a full list of songs to use at storytime.

Although, I still like the idea of marching into a school, playing my snare drum and yelling out “Libraries Rock!” My jokes, poems and songs worked out great!  What type of presentations are you doing to promote your summer reading program?  Email me at paigeb@deschuteslibrary for more rock poems and jokes.