Author Julia Finley Mosca and illustrator Daniel Rieley have broken a barrier with The Girl Who Thought in Pictures: The Story of Dr. Temple Grandin.  One of the first autistic persons to speak publicly about her condition, Dr. Grandin’s insight into the minds of cows, and her perseverance, led her into the halls of corporate America and changed the ethical standards for processing meat.  Dr. Grandin has received numerous honors and written many books.

Sure, we’ve had some nice middle-grade books with well-developed autistic characters, like James Preller’s Along Came Spider and Ann Martin’s Rain Reign. My “radar” as an autistic person would also add John David Anderson’s Ms. Bixby’s Last Day to this list.  It is not explicitly stated that the character of Steve is autistic, but his affinity for facts and figures seems pretty neurodiverse to me! 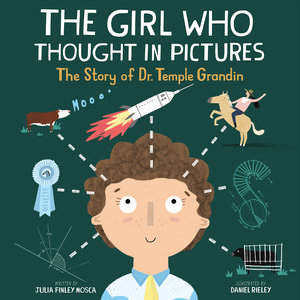 The Girl Who Thought in Pictures is the first major release for younger children to put the autistic mind front-and-center.  (Why Johnny Doesn’t Flap: NT is OK! by Clay and Gail Morton is an excellent book that offers an autistic boy’s perspective on his neurotypical friend, but its reach was more limited.)  This book’s existence is a big milestone for neurodiversity.  Finally, society is seeing the autistic mind as something “normal” enough to explain to a kindergartener!

This book is designed for read-a-loud, and is illustrated with engaging pictures of the young Temple Grandin.  It rhymes, a lot.  Sometimes it feels that the author is trying too hard to make rhyme happen.  As an autistic children’s librarian, I would recommend this book to a wide range of patrons.  Content-wise, it is appropriate for those who are still being read to, as well as for children in the middle grades. There is even an “About Dr. Temple Grandin” write-up at the back of the book for older children who want to read more about her life.

Now, why do I say this is book is “Just a Start”?  Dr. Grandin is a pioneer who essentially invented autistic self-advocacy.  She is an immensely important figure.  Yet, autistic culture is changing, and Dr. Grandin doesn’t seem to be moving with it.  I read a lot of blogs and articles written by autistic people, and many are quite critical of Dr. Grandin.  As recently as an April 12th, 2013 New York Times interview, Dr. Grandin was flirting with a connection between vaccines and autism. This is pretty offensive to many autistic people and allies.  This offensiveness goes beyond this purported connection’s nonexistent scientific foundation. Even if vaccines did cause autism, would you really rather that your child catch a life-threatening disease than that they be autistic?

I have struggled with this distinction, myself.  I was diagnosed through psychological testing, and my diagnosis is Autism Spectrum Disorder, Severity Level 1, along with General Anxiety Disorder.  “Severity Level 1” means that I require support, as opposed to “substantial” or “very substantial” support.  Many therapists, and people in that “Severity Level 1” category still use the terms “Asperger’s” and “high functioning.”  (The American Psychological Association stopped using “Asperger’s” when they published the DSM-5 in 2013.  The World Health Organization still lists it in the ICD-10.)

Reading the words of other autistic people has allowed me to see why it is problematic to refer to myself as having “Asperger’s.”  I can see how it is demeaning to those whose challenges may be more visible for me to elevate myself above them.  A person may have a much harder time communicating verbally than I do, or even be non-verbal, and have assets and gifts that I do not have.

Many autistic people would also take exception with this book’s description of young Temple’s “tantrums.”  The word “tantrum” simply implies poor, attention-seeking behavior.  It draws an unfair parallel between an autistic child who is overloaded by stimuli, and a child who is upset at not getting their way. (“Meltdown” is considered the more appropriate term.)  It may seem a minute detail, but word choice can have a tremendous amount of power.

I’m happy that The Girl Who Thought in Pictures exists.  I would display, promote, and talk about the book.  But I truly hope that it is a start, and not a destination.  I hope that as time passes, there are more notable, openly autistic figures whom young children can learn about.  I hope that there are more well-developed autistic characters in picture books and early chapter books, not just in middle-grade.  Perhaps there could even be some autistic authors writing these books.  Storytelling is actually something that is supposed to be difficult for us; when I was diagnosed, I was actually given a storytelling test.  I’m not very good at telling stories.  But you know what they say: when you’ve met one autistic person, you’ve met one autistic person.  More of us will get there.  It’s already happened in the Young Adult world with Corinne Duyvis, author of Otherbound and On the Edge of Gone.  A Dutch author who writes in English, Duyvis actually published a piece in The Guardian titled “Autism Helped Me Become an Internationally Published Author – Here’s How.”

How can librarians do better at relating to autistic people, and autistic culture? Read, listen, and read some more. (The Facebook page “The Thinking Person’s Guide to Autism” is a good start.)  No one writer or online personality speaks for all of us; I question and/or disagree with much of what I read.  Many librarians who want to know more about how to work with autistic people will watch a webinar, or may attend a training on “special needs” run by an educator or therapist.  Such programs can be helpful in context, but the best way to learn about us is to learn from us.  Please listen to us, and please collaborate with us!  That would be my advice to the creators of Netflix’s Atypical and ABC’s The Good Doctor, and that would be my advice to any working children’s librarian.

This guest post was written by “Justin Spectrum.”  Justin Spectrum is the pseudonym for a youth services librarian in the United States. Read more about his perspectives as an autistic children’s librarian in this previous ALSC Blog piece.  Justin can be reached at  realjustinspectrum@gmail.com. Justin would love to hear from you; email him directly or add comments to this post.