In case you are one of the 18 people who  haven’t yet heard the news: there’s going to be a total solar eclipse on August 21st, that will cross the United States. Media coverage of this rare occurrence  is exploding. It’s exciting to have such an enthusiastic response from the public.  It’s also a little intimidating. 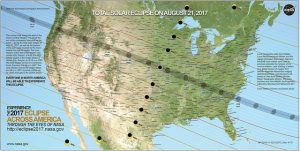 Along with 4799 other public libraries, my library was lucky enough to be selected for the eclipse viewing glasses grant. The 2017 Solar Eclipse project is funded by the Gordon and Betty Moore Foundation through Grant GBMF5373 to the Space Science Institute.

When I applied months ago, barely anyone had heard about the event. It hardly made a ripple in the programming pond.  Some of my colleagues questioned why we would need so many pairs of the glasses. I strenuously asserted that, yes, we would need every single pair. It turns out I was right.  Nyah, nyah — told ya so.

Eleven days out we are cutting out extra pinhole viewers and instruction sheets for our eclipse crazed community. We are referring them to the local big box stores and gas stations (what?!), who are selling glasses for $1 per pair.

Thanks to a viral news release,  news outlets, websites, blogs, etc. are sharing with the world that public libraries are distributing free eclipse viewing glasses. Some of you may have heard,  the news release included a link to an  interactive map that listed all the libraries that received glasses, along with contact information for a lucky staffer at each library. 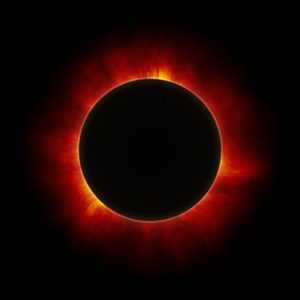 Experts are saying, I hope tongue in cheek, that  it might rival end of the world scenarios: 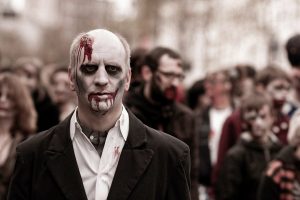 ‘”There are so many ways in which eclipse day is going to resemble a zombie apocalypse,” Angela Speck, a researcher at the University of Missouri and member of the American Astronomical Society’s eclipse team, told Space.com by email. “There will hopefully be less bloodshed, but zombies don’t need regular food, or sleep, or toilets,” Speck said. Eclipse spectators, on the other hand, need all those things.’

While I’m busy planning eclipse and sun / moon activities to fill up the time before and after totality – I’m also thanking my lucky star (that’s you Sun) that we’re not in the actual path of totality (as fun as that might be to see).

If you’re late to the game  — here’s a short list of activities and links you can pull together to appease the horde:

Update: I began writing this post last week.  We are now on day six of the countdown. Yesterday, my library ran out of our early distribution supply of glasses in under an hour;  we have created a separate statistic tracking category for eclipse related questions. Some patrons have advised us they will arrive early  at the library and camp out for glasses.  While a bit stressful, it’s also pretty dang cool that libraries are getting so much attention from the public. With luck and planning, the public will come for the solar event, but our services will shine so brightly, they will eclipse the Sun.