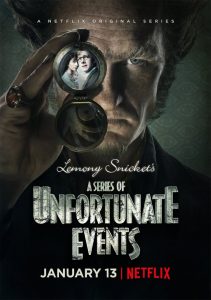 Lemony Snicket’s A Series of Unfortunate Events has been a mainstay on the shelves of children’s libraries since it first debuted in 1999. In its original review of The Bad Beginning, the first book in the 13-book series, Kirkus said, “Those who enjoy a little poison in their porridge will find it wicked good fun.” The nearly two decades since publication have proved that sentiment to be more than true. In fact, it seems each generation of young readers finds new fans caught up by the exhilarating, disastrous adventures of the Baudelaire siblings.

Besides almost 20 years of relevance, (a rare feat in a publishing industry that is on to the next big thing in no time flat), Snicket’s retelling of the Baudelaire adventures has another feather in its cap. The series has been adapted twice, once as a feature film and currently as a tv series on Netflix, and in a delightful turn for adapted works, both versions are outstanding! 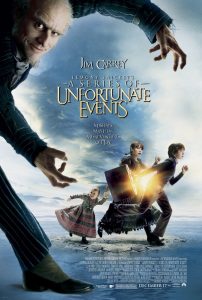 In 2004 a feature film starring Jim Carrey as the villainous Count Olaf was released. Carrey is truly remarkable in the role, bringing a sense of terrifying menace that is surprising when you consider the comedic bent of most of his body of work. Interestingly, the exact same sentence could have been written about Neil Patrick Harris, who also brings a sense of terrifying menace to Count Olaf in the Netflix series. The children playing the siblings in each adaptation are uniformly excellent, as are the impressive supporting casts, which include big name actors like Jude Law and Meryl Streep (in the movie) and Joan Cusak and Will Arnett (in the television show). The movie version combines the plots of the first three books in the series, while the Netflix show tackles the first four books, telling the story of each book over the course of two episodes.

The 2004 movie was originally the work of Barry Sonnenfeld and Daniel Handler, a.k.a. Lemony Snicket. Shortly before principle photography began, Sonnenfeld and Handler left the project. Many years later, when Netflix purchased the film rights for the series, Sonnenfeld again became involved, with Handler’s encouragement. This through-line of behind-the-scenes talent leads to interesting links between the two works, especially if you view them back-to-back. Still, there is enough unique and interesting in each adaptation to recommend both wholeheartedly to any patron looking for an “unfortunate” viewing experience.

Have you seen holds rise on the books since the series premiered? The Bad Beginning hasn’t been checked into our library since, and we have six copies!