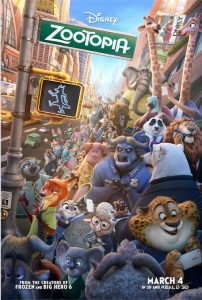 Disney’s Zootopia was a massive hit earlier this year, becoming one of the top-grossing films of 2016 and garnering a near-perfect 98% on Rotten Tomatoes, an impressive feat in a divided age. The film, which follows a rabbit named Judy who becomes the first of her kind to join the police force in the Metropolis Zootopia, is laugh-out-loud funny, as evidenced by everyone’s favorite sloth joke video.

But the film has more to offer than your standard, kiddie-fare lesson. The makers of Zootopia use their world to explore some very big topics, topics that have gripped the adult world for more than two years. As the only tiny mammal on the police force, Judy faces all kinds of harassment about a rabbit’s ability to do a job usually done by large animals and predator animals. And Judy herself holds on to deep-seated prejudices against foxes, whom she considers sly, conniving, and evil in their very nature.

The internet quickly took notice of the movie’s deeper themes, with The Root noting in their article “Zootopia: Yes, Disney Made a Movie About White Supremacy and the War on Drugs”:

Zootopia makes it clear that terms like “predator,” “prey,” “black,” “white” and “Hispanic” are all pretty interchangeable when you’re talking about discrimination. Judy is discouraged from being a cop, and when she graduates at the top of her class at the police academy, Police Chief Bogo (voiced by Idris Elba) believes that she’s just a result of the Mammal Inclusion Initiative, a sort of affirmative action for the short and fluffy woodland creatures.”

In this movie, parents, librarians, and educators find themselves with a unique opportunity to discuss really tough issues with a much younger audience than we might normally be able to reach. Children need diverse books, and they need movies like this one to teach them about differences, and prejudices, and what a bias looks like. At our library, we’re hosting a special family screening of the film and sending kids and parents home with a discussion packet of articles and questions to get them talking at home. Have you seen Zootopia? Have you used it in your library or school?