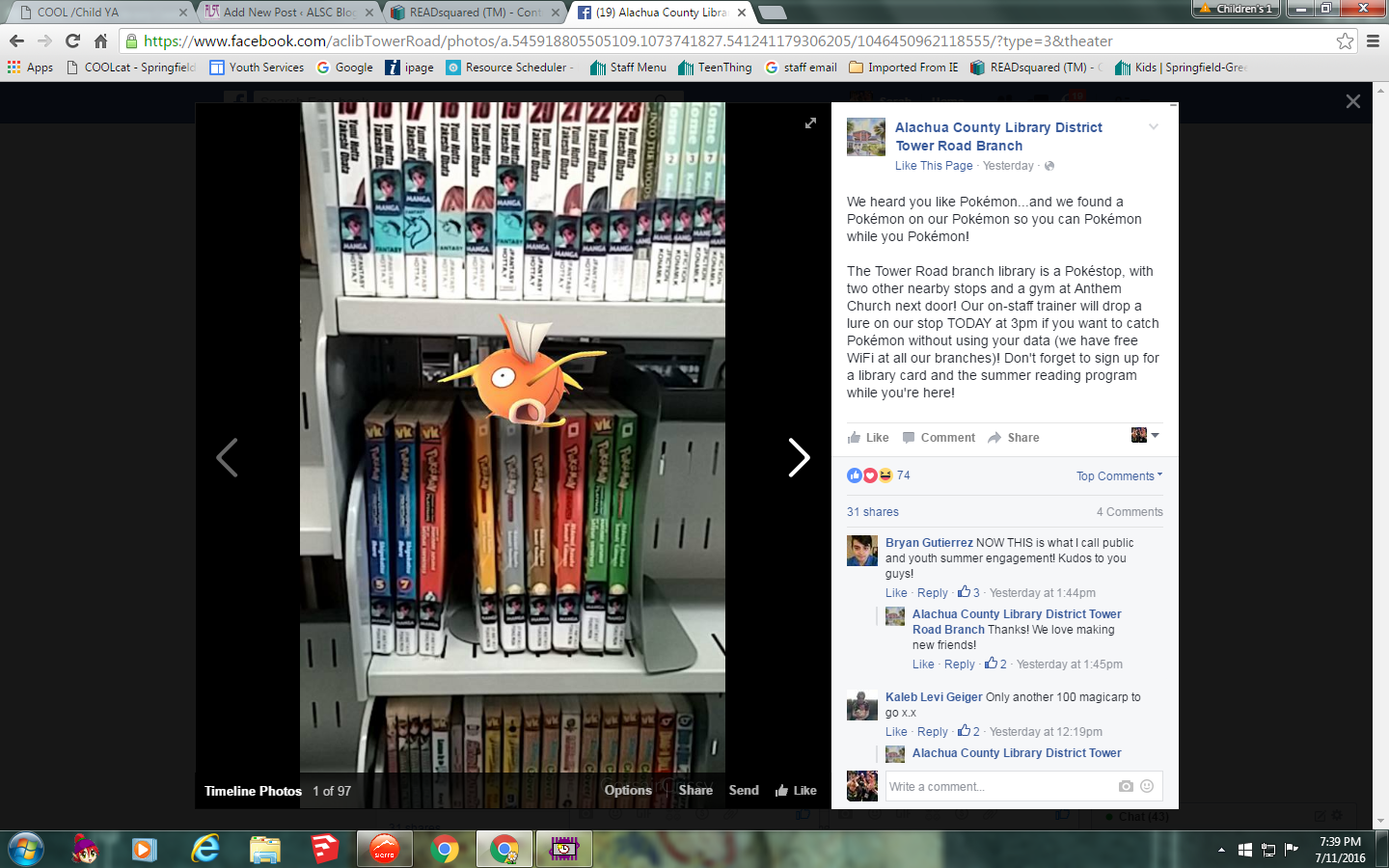 Sunday evening my family took a walk to our neighborhood park. It’s not unusual to see families out and about riding bikes or walking dogs, but this past weekend the parks have been full of people staring at their phones. Pokemon Go has taken over my community. I’ve never seen our park so busy! There were around 300 people out walking around the park and playing this game. If you’ve been on social media at all in the past few days, you have most likely seen many mentions of Pokemon Go from the good – it’s getting people out and walking, to the bad – people are spending a lot of time staring at screens and not paying attention to their surroundings.

So what is Pokemon Go?
Pokemon Go is a free app that has players walking around their communities to find Pokemon in the real world. The game enables Augmented Reality which means the Pokemon can appear in “real life”. The more Pokemon you catch, the more you can level up and earn experience points all of which can help you battle for gym domination.

Why should libraries care about Pokemon Go?

Pokemon Go is a great social game and getting people out and moving! In order to find Pokemon, you have to walk around and visit various places in your community. You also need to stock up on supplies, which you can do at Pokestops, which many libraries are. Some libraries are even lucky enough to be a gym, which means even more people coming through your doors as these are places everyone is after! This is where you can battle Pokemon and gain more points. Libraries are already doing some great publicity and capitalizing on the games success.

Several libraries are taking advantage the fact that they are Pokestops. People have to be visiting your location to take advantage of the supplies offered in the game, so why not promote that and encourage them to  come in from the parking lot? That’s exactly what Aluchua County Library did when they decided to drop a lure (a special item that brings Pokemon to your location for a short time). While there, encourage everyone to  stop in, sign up for Summer Reading, and get a library card! We’re going to try this today at my library and we’re planning on setting up a table by our front door to greet Pokemon trainers (what players are called in the game), promote our Summer Reading Program and events. You can also provide some special giveaway if possible to Pokemon trainers or if you’re a gym, create some small gym badges and offer those to anyone who conquers your location.

You can even take things one step further like the Farmers Branch Manske Library and set up an impromptu Pokemon hunting party. This could be around your branch, or if you have other locations nearby, like this library, you can go out walking.

There are also numerous passive activities you can do with Pokemon Go. To go with our life size game day this past weekend, we put out a Pokemon craft station for kids to decorate Pokeballs and their own custom Pokemon card.

We also made a passive display in our window asking patrons to let us know what Pokemon they caught in the library.

I’ve also seen libraries asking what team patrons have chosen and you can put up displays asking about favorite Pokemon, Pokestops, or tips and tricks for the game. You can make pixel Pokeballs and there are tons of craft activity ideas from birthday parties that can easily be adapted to libraries. As the game continues on, libraries can be a gathering place for sharing tips about the game and a trading location when trading becomes available. Eventually the possibility to battle anywhere may also become available making the library a great programming spot for virtual Pokemon Battles.

Why does this matter to libraries other than being part of a pop culture phenomenon? As I mentioned, we hosted a life size game day on Saturday which happened to be perfect timing with the Pokemon Go launch. I added a promotion of Pokemon Go to the event, all of my staff and I talked up the game to our patrons, asked if they were playing and we quickly created some passive crafts and displays.

As I was talking the game up to some of our patrons, one family got especially excited. The kids had recently discovered Pokemon and the idea of catching them in real life sounded like so much fun. I showed them how to play and then went back to  the program. Two hours later the mom came up to the desk and said thank you for showing her the game. She mentioned her child had a disorder that made it difficult to process fat and that her child needed to be active but this was always a struggle as her handicap made this difficult. She mentioned that her child loved Pokemon and had been walking around the library all morning catching Pokemon and that normally she would be hearing complaints by now but her child was happily staying active. By providing a place to play the game, creating a partnership between Pokemon Go and the library and being excited about this pop culture event, we helped make this story possible for this family. And that’s exactly why libraries should be taking part in Pokemon Go.