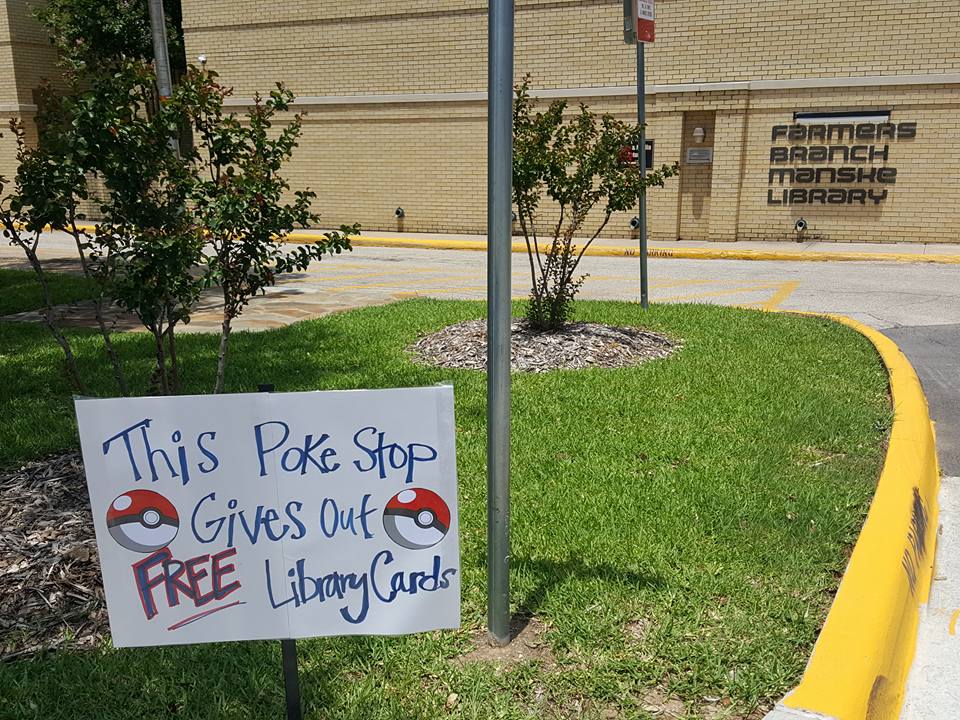 Pokemon Go popularity is not showing any signs of slowing down anytime soon. According to a report from USA Today the game has topped 15 million downloads and the average person is spending around 33 minutes per day in the app. With the game continuing it’s pop culture run and with libraries as many Pokestops or Gyms, this is a perfect time to embrace media mentorship in the library and incorporate it into our Pokemon Go programs.

According the ALSC White Paper on Media Mentorship, “media mentors support children and their families in their decisions and practice around media use.” Many libraries are taking the opportunity to use Pokemon Go as  a starting point to teach kids and families about digital safety.

One of the biggest concerns about Pokemon Go when it was first released a week ago was the amount of data it was collecting from users, especially from Google Accounts.  An update has come out and this issues has been fixed, but this is a perfect opportunity to discuss just what digital safety means and how any app you use is going to be collecting some data and how you can control your privacy settings.

There has also been concern about the game leading people into dangerous situations or places they shouldn’t go. It’s a good idea to be aware of your surroundings at all times even when playing the game. Consumer Reports listed four things parents should know about Pokemon Go and these are great topics to be discussed in library programs about Pokemon Go.

“Luring” Users to the Library

Korey Finch, Youth Services Librarian at the Farmers Branch Manske Library Farmers Branch Texas, jumped at the idea of hosting a Pokemon Go walk around her library. Her library has a park located behind them so Korey dropped a couple of “lures” (items that bring more Pokemon to your location).

“I led a walk around the trail and we had almost 40 people at the park with us at one point. I offered cold water for trainers, and we ran around and captured a gym. They want to make it a regular thing! It was originally for teens, but carloads of adults stopped by, and some drove past shouting their team alliance.”

“At the program we went over the dangers of being aware during an augmented reality game, and the dangers of sharing their location,” Korey shared. More Pokemon Go walks are planned for the future at Farmers Branch Manske Library as well. “We have a pretty neat trail around our library, and the plan is for everyone to meet up, incubate an egg, and walk until they hatch. It’ll be a safe way for kids to do it with other kids, but with a “cool adult” to supervise. I have children, so I am very aware of the dangers the game poses to kids should they attempt to go alone. Even Ash didn’t go alone!”

The Greene County Library is also using lures from the game to attract Pokemon Go players to their library at set times.

Amy Koester, Youth & Family Program Supervisor, Skokie Public Library shared about their upcoming Pokemon Go Safaris, “The core of the program will take place outside within a 3-block radius of the library. The maximum number of registrants for the program is 15, and we’ll gather in the library first. That’s where we’ll talk about some ground rules, both for staying together safely outside, and also general tips and things to think about if playing Pokémon GO or other GPS-enable & Augmented Reality games.

We’re encouraging kids to either bring their own devices already loaded with the app, or they can use one of our iPads. After those introductions, we’ll head outside on our safari. Our goal will be to walk around to different PokeStops, where kids can collect items and also learn a bit about those interesting landmarks and features that were turned into PokeStops for the game. We want kids to see something new on the safari–and those new things will likely be ones they’ve walked past before but never noticed. Kids will also catch Pokémon as we go.”

As to why Pokemon Go and the library is a perfect opportunity for media mentorship, Koester added, “these programs offer us an amazing opportunity to seamlessly integrate aspects of digital literacy and digital citizenship skills into a program. We’re in particular going to talk about how to stay physically safe when interacting with this type of game that takes you out into the community; how to consider the privacy implications of playing digital games; and ways that playing the game can lead to more time spent outdoors, increased knowledge of one’s community, and the forming of new social connections. We’re offering the programs as media mentors–as people who are equipped with resources and expertise to be able to help kids and their families make the best choices and form them best digital habits for them. We’re here in a supporting role and to ensure we share all the information we have available, and then it’s up to kids and families to decide what’s right for them. Our longstanding Minecraft Mania programs have served a similar function, and these Pokémon GO Safaris are an additional frontier for that work.”

Even if a full program isn’t a possibility, libraries can provide tip sheets and resources for parents wanting more information about the game. Librarians can be at the forefront of knowledge of Pokemon Go and help patrons navigate the game. By doing so we can show patrons that we are media mentors and that libraries can be resources for digital advisory.

In addition to digital safety, there are many general safety concerns the game has brought up. Many people are walking more than they have before and are walking in areas they might not be familiar with.

“Something libraries can work on is reminding, especially children, that they are a place out of the sun, with air conditioning and water,” said Rader. “It is also fairly inexpensive to set up some charging stations. We have also worked with out local Cancer Council to give out sunscreen.

From my personal playing of the game (and as a cross country runner), STRETCHING. I think especially these “safaris” set up by libraries should focus on stretching. Many of my teens have been walking many miles in the heat for the past week. Also, with people playing late at night, remind them about reflective clothing.

We have a small town, so it is easy to reach out to the police (plus our police department has been awesome about the whole thing). But getting them to come and do a safety presentation or even having bike or horse cops ride along for a “safari” would be a great partnership. Also, most of my teens are in groups. Groups are the best and one of the safest ways to play.”

Participating without a Smart Phone

Rader also reminds librarians that not everyone is able to play or download the game onto their smart phone and libraries can be a place of access for all.

“For those who don’t have smart phones, libraries can drop lures for players who just have ipods or tablets. We have several players who come to our library because we have lures or other teens are more than willing to drop them,” Rader suggests.

My library has iPads for checkout and library use. It’s a free app, which means it’s available to download on the iPads, but the use of lures would mean more of a chance for people to play and catch more items in the branch.

Libraries are a great place to inform patrons about digital safety and as long as Pokemon Go is popular, libraries can be part of the trend. Many people have asked if they can request their library to be added as a Pokestop or upgraded to a gym, and Niantic, the game creator, just released the option for suggestions for Pokestops.