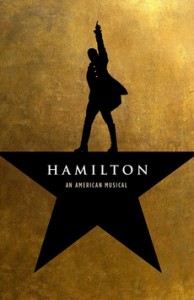 Broadway’s hit show Hamilton is nothing short of a cultural phenomenon: sold out until January 2017, its cast album just became a gold record, meaning it has sold more than 500,000 copies; meanwhile the cast recently performed live at the Grammy Awards and at the White House. For those not yet obsessed with the show, Hamilton mixes hip-hop with show tunes to tell the story of America’s “ten dollar Founding Father/without a father.” The cast is stunningly talented and diverse, and young people (and their friendly neighborhood librarians) across America are obsessed.

So how can we capitalize on this Hamilton hunger in the children’s library? True, the musical is based on a book, but not many 10 year-olds are wiling to haul an 800+ page, Pulitzer-prize winning behemoth to school. Prior to his recent fame, Hamilton was an oft-ignored Founding Father. In fact, Chernov’s book bills itself as the “first” full-length biography of the man, written nearly 200 years after he died. So what can we offer Hamilton‘s younger fans?

Luckily, offerings for the young reader are not as slim as you might think. The following books are in-print, well-reviewed, and fun to read:

The Notorious Benedict Arnold: A True Story of Adventure, Heroism & Treachery (2013, Gr. 5+ – yes, this one is not about Hamilton. But it’s excellent, and tells the story of another early American whose story has been reduced to one thing: traitor)

Better Nate than Ever (2014, Gr. 5+ – again, not about Hamilton. But a kid who loves Broadway will love this book. And so does Lin Manuel Miranda!)

What books would you give to a young Hamilton fan? And what’s your favorite song from Hamilton? Mine is (currently) “Dear Theodosia.”