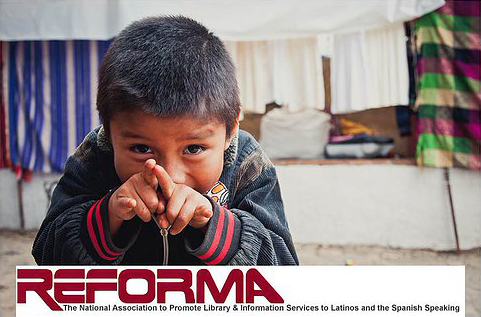 The REFORMA Children In Crisis (CIC) Project was created by librarians who witnessed an inhumanity and felt compelled to act. There are several articles out there that introduce the great work of this project. However, for this piece, I wanted to bring in a perspective that captured the spirit of the movement — the very personal connection the members have to the work they do. Ricardo Ramirez is a Senior Library Assistant for Youth and Spanish Services at Butte County Library in Chico, California. Below is a personal narrative about his experience.

I started working on the REFORMA CIC in the summer of 2014. It was during my second semester as a MLIS student at SJSU, and in the very early stages of being a parent, that the contemporary plight of refugees from Central and Latin America came to the forefront of my attention. Because at the time I did not have a television, it was from following social justice non-profits on Facebook and being networked on social media with activists and educators, that I began to learn the issues affecting these refugees, and moreover, the fact that so many of them were unaccompanied children from some of world’s most dangerous regions. The keyword here, is children, very much like my own child, who would like to climb up on my lap while I did my graduate research. I was not surprised to learn that this type of child migration existed, but it was shocking none the less, and especially painful to see the conditions in which they were detained by immigration agencies. At the time I had just finished a pair of papers, Counter-Storytelling in Young Adult Literature and Braided Histories: Beyond Collected Biographies in Children’s Literature, both of which explored how “non-traditional” narratives can provide young people in hostile environments valuable resources and emotional support. A flicker of hope and inspiration occurred: I am a position to offer some type of support…

Before I had submerged myself in statistics of the crisis, before I understood the demographics of the refugee children, there were a handful of photographs that moved me. It is important for me to mention this because I was in the early stages of raising my own child and also deeply involved in the early learning programming at my library, and from that particular vantage point at that time in my life I was constantly motivated to explore how young minds could be shaped by positive learning environments and play. The photographs that I saw of the refugee children were in stark contrast to what I saw on a daily basis, and what my ideals were for creating spaces where children and families can thrive and explore. Far from learning environments, most child refugees from Central America are detained in spaces that are dark and heartbreaking. I held my own child as I encountered these images, and I knew that the one thing I could do for them was to extend my hand and my heart. I imagined a consortium of librarians and educators providing school, storytimes, and performance. I had witnessed on a daily basis how a genuine smile, a song, a story could brighten the spirit of child who was attending their first storytime, or listening to their parent hum a melody they had never heard before. As I daydreamed about all of this, in Austin, San Diego, Miami, Fresno, and in other parts of the country, librarians, the kind who have spent their entire library careers as advocates for the underserved and unrecognized, gathered their energy and came together to form what would become the REFORMA Children in Crisis Task Force. Somehow, because I raised my hand when they called for members, I was pulled in by their gravitational force, and have been along for the ride ever since.

Addressing the literacy and information needs of these children is a part of a complex issue. Children and teens who are fleeing from violent regions face extreme hardships that can cause a lifetime of trauma. Books and outreach are an important step. Librarians like Ady Huertas and David Lopez, two all-star members of the CIC Task Force, have provided outreach to detention centers and refugee shelters by providing books and programming, as well as giving tours of their libraries, library card sign ups, and summer reading programming. In both cases, they were supported by their local REFORMA chapters and members into action. Ady Huertas’ proximity to the US-Mexican Border Region and her connections with Tijuana librarians like Rosa Maria Gonzalez, has enabled our outreach to expand not only to refugee children, but also children and families who are living in extreme geographic and socio-economic isolation.

It is eye opening work, that can be exhausting. But what it has done for me is to be constantly vigilant for causes of the underrepresented and populations of young people that have experiences that we may be unprepared to deal with. Challenges exist. At the core of the CIC is a continual fundraising and advocacy effort for a cause that is perpetual and variable from region to region. Add to this, working against a strong re-emergence of hostility towards migrants and refugees, librarians who serve youth and families have a strong responsibility to be inclusive to new communities and be prepared to provide resources that are focused on their evolving needs. Yet librarians and educators must also be able to create programs for all in their service areas that reinforce community building and positivity towards new immigrants. This can be as simple as taking the time after a storytime to personally welcome a new family with warmth and gratitude because they are spending their family time with you.

The most important thing about all of this, for us as information professionals and resource providers to children and families, is that refugee children are living their lives in a state of uncertainty. They don’t know if they will ever find a safe refuge, here or anywhere else. All take great risks to migrate towards safety despite increased violence and persecution on their route to the United States. Refugee children from Central America, much like their counterparts from distraught regions in the Middle East, Africa, and Asia, have no other option but to keep moving away from violence. There is no home to return to. In the past few years many of us have been inspired by public libraries that open their doors to act as a refuge for communities in pain. At the same time, we are heartbroken by imagery of children in detention and being passed from nearly capsized fishing boat into the hands of rescue. What is at the heart of the CIC mission is that some relief is possible in this, be it through the gift of a book that a child can take with them on their journey, or in the outreach that we can offer as they prepare to resettle into a new life that has more hope for them.

To learn more about how you can get involved, visit the REFORMA Children in Crisis Project website.