Most recently, I read about it in the ALSC campaign Babies Need Words Everyday.

It was such a clear campaign with great graphics that we immediately hung up in our library’s bathroom. And, it had research to back it up – the introductory flyer said “By the time children from low-income families reach the age of four, they will have heard thirty million fewer words than their more advantaged peers.” The initiative was created in response to the Obama Administration’s 2014 call to increase early literacy initiatives to bridge the word gap. It uses the research that coined the 30 Million Word Gap as a talking point, and integrates newer research done by LENA or Dr. Dana Suskind, both of which use the “30 Million Word Gap” research as a framework for theirs. My colleague Claire Moore and I were curious about this statistic, and did some digging to learn more.

The “The Early Catastrophe: The 30 Million Word Gap by Age 3” by University of Kansas researchers Betty Hart and Todd R. Risley was a 2003 article in American Educator (Spring: 4-9), which was an excerpt from their 1995 book Meaningful Differences in the Everyday Experiences of Young American Children. The research, although it has been used as a rallying cry in campaigns across the country (including Too Small to Fail, Thirty Million Words, and local initiatives), has been shown to have some disturbing issues.

The issues that other researchers and educators have found in this study include:

Here is a breakdown of their critiques.

In their most cited body of research, the researchers visited 13 high-income families, 10 families of middle socioeconomic status, 13 of low socioeconomic status, and 6 families who were on public assistance in Kansas City one hour per month for two and a half years. They made 1,318 observations and counted vocabulary words spoken to children by parents. The families only included African-American and White families that spoke English; bilingual children do have slower rates of learning vocabulary, but have other skills that monolingual children do not have (Dufresny & Madsey, 2006). They then looked at the number of words heard by each child by SES and saw the gap that has been trumpeted over and over again. The average child on public assistance heard 616 words per hour, the working class child 1,251 words per hour, and the professional family’s child heard 2,153 words per hour of observation. This number was then greatly extrapolated to show that by age four, there was a 32 million word gap between the child receiving public assistance and the child in the professional class. This assumes that the year had 5200 hours and the big assumption: that the number of words heard in an hour during observation was typical.

After the observations, the researchers coded the words the children were hearing from parents. They coded for “quality of interactions” and spent very little time explaining how these codes are backed up by research – in fact, their explanation cites extensive research, but the footnotes only contain a reference to look at their earlier research. Sarah Michaels, Professor of Education at Clark University, said, “Hart and Risley coded for upper middle class/academic or professional politeness and interactional patterns, found that the upper income families used more of them, and simply asserted that more of the quality features is better in producing learning-related outcomes. They identified upper and middle class features of talk, coded and counted them and found, guess what, they correlate with class” (p. 26, 2013). Other researchers say “…by taking the language practices of the middle- and upper-SES families in their sample as the standard, Hart and Risley transformed the linguistic differences they found among the welfare families in their study into linguistic deficiencies” (Dudley-Marling & Lucas, p. 365). The Hart and Risley study set up the working class families and families receiving public assistance to fail. Teresa McCarty, from the University of California Los Angeles, puts it well: “Cloaked in well-intentions— ‘giving children the competencies they need to succeed in school’ (Hart and Risley 1995:2)—gap discourse simultaneously constructs a logic of individual dysfunction, limitation, and failure while masking the systemic power inequities through which the logic is normalized” (Avinerini, et al, p. 71).

This deficiency thinking is similar to the reaction to a 1961 book by Oscar Lewis called The Children of Sanchez which coined the term “culture of poverty.” The book was an ethnographic study of small Mexican Communities that attributed 50 shared attitudes, such as violence and poor planning skills, to the larger culture of all poor people. Unfortunately, this deficit thinking is incredibly harmful to both those under the microscope and the educators (and librarians) who work with them. Paul Gorksy says “Deficit theorists use two strategies for propagating this worldview: (1) drawing on well-established stereotypes and (2) ignoring systemic conditions, such as inequitable access to high-quality schooling, that support the cycle of poverty” (2008). Again, by using a deficit framework, we obscure structural inequalities.

“Valence” or the emotional character of the words was also coded: affirmative, open-ended statements were seen as quality, whereas directive were seen as low quality. Again, no research was cited. There are many reasons why coding in this way without an explanation is wrong – mainly, that white, upper and middle class ways of speaking to their children were valued as quality. In a 2015 article, Gulnaz Saiyed says, “While middle-class activities do lead children to develop a sense of entitlement, individuality, and set them up to feel comfortable in schools, they deemphasize other childhood experiences. For example, many working-class parents do not overschedule their children with extracurricular activities. Instead, they provide opportunities for play, development of curiosity, creativity, and respect for different perspectives.” Another point brought up by Saiyed is how African American children are disciplined more harshly in school, and parents may be preparing them for that. Michaels (2013) agrees, saying “Again, I want to remind you that people from different cultures talk differently to infants, and no one approach or style has been shown to be cognitively superior to another in helping children acquire their native language or grow up to be smart” (p. 29). 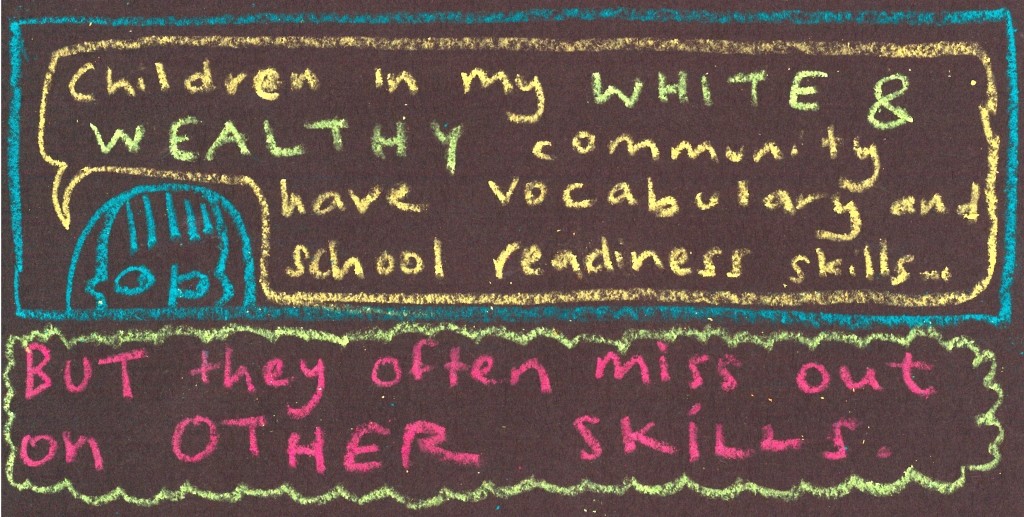 In addition, mobile technology has changed parenting for all social statuses. In other research conducted by Dr. Dana Suskind, middle and upper class parents have other bad habits: “[Anne] Fernald, who sits on the scientific advisory board for Providence Talks, told me, “Some of the wealthiest families in our research had low word counts, possibly because they were on their gadgets all day. So you can see an intermingling at the extremes of rich and poor. Socioeconomic status is not destiny” (Talbot, 2015). The blanket assignation of the bad culture of poverty is harmful to all parents.

The research makes sweeping extrapolations for its findings. In their book Meaningful Differences, Hart and Risley assert that vocabulary is an important indicator for future success, but spend very little time explaining why: “Because the vocabulary that individuals can command reflects so well their intellectual resources, we still have oral examinations, and vocabulary plays a major role in tests of intelligence” (p. 6). There are no citations of other research that describes why vocabulary is indicates “intellectual resources” – instead, they talk about how it is easy to measure.

As a librarian, I understand the importance of vocabulary as one aspect of literacy. However, I don’t understand why this study allows vocabulary to be the main indicator for school success, or why specifically children as partners in the conversation (as opposed to overhearing conversations) was seen as so important. As Susan Blum says in “Invited Forum: Bridging the ‘Language Gap’” (Averini, et al, 2015), “Anthropological research shows, in fact, that addressing the youngest children as conversational partners is extremely unusual in the world” (p. 75). Are we sure that makes it better?

Michaels says, “The deeply destructive, pernicious thing about the Hart and Risley study is that it presents what seems like totally rigorous, careful, objective science (what under careful inspection is nothing more than pseudo-science)—that gives teachers, educators, policy makers the ‘proof’ they need to believe that these poor kids aren’t smart, aren’t good learners, don’t have adequate language to think well with” (p. 35).  As librarians, when we cite the 30 Million Word Gap, we run the risk of continuing to enforce the bias and classism that this study did, as do some of the initiatives that have cropped up around this study. “In effect, the word gap interventions propose that improving social and economic outcomes for poor and minority families can be as simple as training them to act more white and middle-class (and monitoring their compliance with a ‘word pedometer’)” (Saiyed, 2015). While Babies Need Words Everyday does not go as far as to install word pedometers on parents, and instead simply encourages them to speak with their babies, the issue is very different – but by using word gap and deficit thinking, we may be treading in dangerous territory.

What can we do?

As librarians, we can help support literacy skill-building for both parents and children with Babies Need Words Everyday’s colorful posters and in our storytimes and outreach efforts. As public libraries, we provide free support to parents of all classes who may be struggling to find time or resources to provide early literacy practices to their children. Families in poverty also get support from public libraries to help them combat the structural inequalities they face. We also have to make sure we are creative and reflexive about encouraging multiple literacies, such as (all of which are strengths of a diversity of groups):

As centers providing informal learning opportunities, libraries are the perfect spaces for encouraging multiple literacies. For instance, “Low-income children are more likely than their higher-income peers to be in factory-like classrooms that allow little interaction and physical movement. As a result, these children spend more time sitting, following directions and listening rather than discussing, debating, solving problems and sharing ideas” (McManus, 2015). ALSC members have many brilliant ideas for programming to combat this issue on this blog. What else can we do?

If we are truly invested in literacy equity as librarians, being engaged in understanding our own attitudes and resources is important. I feel hesitant to use the 30 Million Word Gap as a statistic in my storytimes because of what it implicates, and I wonder what you all think. Even the newer research by the LENA foundation and Dr. Dana Suskind use Hart and Risley’s flawed framework. The newly updated ALSC competencies are full of guidance about recognizing and responding to structural inequalities, being self-reflexive, and culturally competent. I’ll end with one of them. 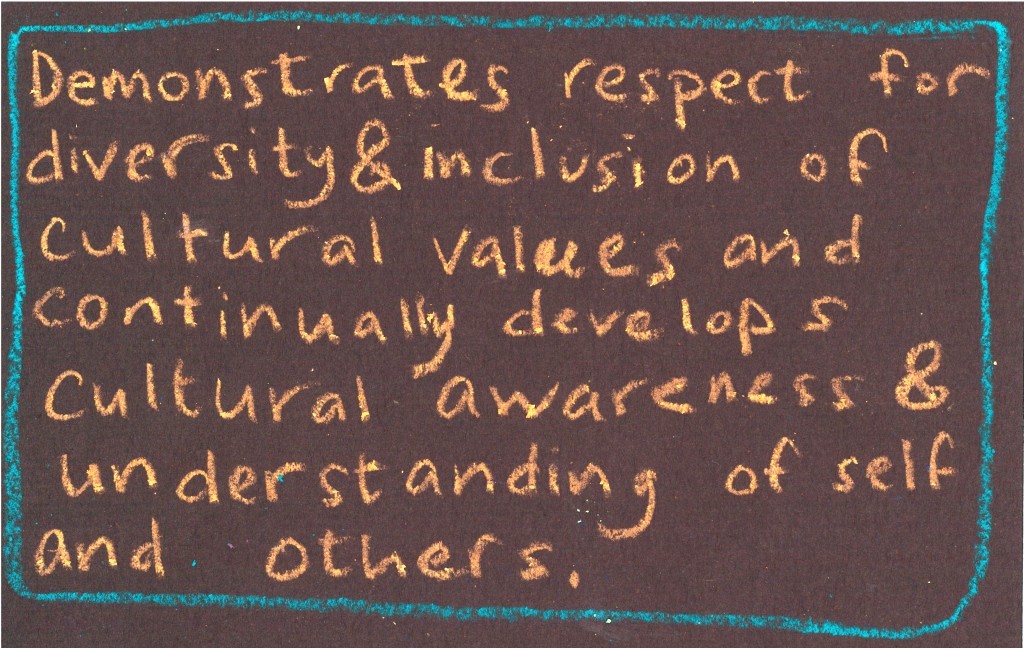 -Many thanks to Claire Moore – this piece is the result our meetings and conversations and her editing skills.

Lisa Nowlain is the Harold W. McGraw Jr. Fellow and Children’s Librarian at Darien Library in Darien, CT (you can be the next one! Apply by April 1 at www.darienlibrary.org/mcgrawfellowship) She is also an artist-type (see more at www.lisanowlain.com).

Gorski, P (April 2008).  The Myth of the Culture of Poverty. Poverty and Learning, 65(7), pp 32-36. Retrieved from http://www.ascd.org/publications/educational-leadership/apr08/vol65/num07/The-Myth-of-the-Culture-of-Poverty.aspx

McManus, M. (2015, October 12). Are some kids really smarter just because they know more words? The Conversation. Retrieved from http://theconversation.com/are-some-kids-really-smarter-just-because-they-know-more-words-47819