Last year, the ALSC’s 11 endowments disbursed more than $51,971 to award and support authors, librarians, and library programs across the country dedicated to children’s services. The first ALSC endowment fund to be established was the Melcher Scholarship, announced in 1955, while the newest is the Carole D. Fiore ALSC Leadership Fund, established in 2009. The ALSC endowments all together have increased in value from $1,687,372 in 2005 to $2,684,430 in 2015. These endowments often bear names that are familiar to ALSC members: Arbuthnot, Belpré, and Wilder. However, several of these funds were started by names that are not so familiar. For example, in 1986 the Antonio Mayorgas Estate gave ALSC an unrestricted gift, which was used to establish the ALSC Distinguished Service Award. The amount that ALSC is able to spend each year is based on a formula used by ALA. It is a percentage of the quarterly balances over five years. In fact, that is precisely what distinguishes endowments from other types of funds: They are intended to preserve the long-term viability of the initiatives they support and are not intended to be spent down to zero. How long have these endowments been in place? Who started them? And who exactly do they target? Here’s a closer look:

Founded: 1986
Benefactor: Unrestricted gift by the Antonio Mayorgas Estate
Purpose: In 1991, the Board established the DSA to honor an individual member of the ALSC who has made significant contributions to, and had an impact on, library services to children and ALSC.
Award: $2,000 and an engraved pin.
Past recipients: The first winner was William C. Morris and the most recent was Kathleen T. Horning.
Website: http://www.ala.org/alsc/awardsgrants/profawards/distinguishedservice

Founded: 2002
Benefactor: The ALSC Board, via an approved net asset balance transfer from the operating budget. The lecture series was originally funded through the sponsorship of the Scott, Foresman Company starting in 1970 through the late 1990’s.
Purpose: For the presentation of a paper considered to a significant contribution to the field of children’s literature by an author, critic, librarian, and/or historian at the Arbuthnot Lecture series.
Award: $2,000 honorarium and travel expenses for lecturer; $2,000 support to the lecture host site. ALSC board has plans to build the endowment to support a $5,000 honorarium within the next five years.
Past recipients: In 2015, Brian Selznick presented “Love Is a Dangerous Angel: Thoughts on Queerness and Family in Children’s Books.”
Website: http://www.ala.org/alsc/arbuthnot

Founded: 1996
Benefactor: The ALSC Board authorized transfers from the operating budget’s net asset balance, ALSC and REFORMA members, and other individual and corporate donors.
Purpose: Support the expenses related to administering the Pura Belpré Awards. The awards honor Latino/Latina writers and illustrators whose work best celebrates the Latino cultural experience in an outstanding work of children’s or youth literature. This award is co-sponsored by ALSC and the National Association to Promote Library and Information Services to Latinos and the Spanish-Speaking (REFORMA), an ALA affiliate.
Award: A medal for the winners; award plaques for Honor Book authors and illustrators.
Past recipients: Author Meg Medina for Yaqui Delgado Wants to Kick Your Ass in 2014 and illustrator Raul Colón for, Doña Flor: A Tall Tale About a Giant Woman with a Great Big Heart in 2006.
Website: http://www.ala.org/alsc/awardsgrants/bookmedia/belpremedal 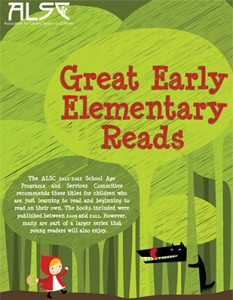 Founded: 1982
Benefactor: Helen L. Knight
Purpose: To support long and short term projects and programs of the ALSC
Award: Funding up to $1,500 in a given year to a specific ALSC committee; Board authorized expenditures to support programmatic activity.
Past recipients: School-Age Programs and Services Committee designed and produced the brochure “Great Early Elementary Reads;” funded attendance for an Advocacy and Legislation Committee member during the 2015 National Library Legislation Day in Washington, D.C.; and funded the design and printing of a toolkit created by the Library Service to Special Population Children and Their Caregivers Committee.
Website: http://www.ala.org/alsc/alsc-childrens-library-services-fund

Founded: 2005
Benefactor: San Diego Foundation’s Dr. Seuss Fund; Random House
Purpose: The Geisel Award is given annually to the authors and illustrators of the most distinguished American book for beginning readers published in English in the United States during the preceding year.
Award: A medal for the winners; certificates for Honor Book authors and illustrators.
Past recipients: Mo Willems has won the award twice (2008, 2010) and honored five times (2011, 2012, 2013, 2014, 2015).
Website: http://www.ala.org/alsc/awardsgrants/bookmedia/geiselaward

Founded: 1955
Benefactor: various members, including the publishers of each year’s Newbery and Caldecott awards.
Purpose: To fund scholarships for two graduate students pursuing an MLS degree with a focus on children’s librarianship.
Award: two $7,500 scholarships; increased from $6,000 in 2015.
Past recipients: 2015 recipients: Elizabeth Pearce and Melody Tsz-Way Leung
Website: http://www.ala.org/alsc/awardsgrants/scholarships

Founded: 2000
Benefactor: Bequest of William C. Morris with principal of $400,000.
Purpose: To fund programs, publications, events, or awards in promotion of children’s literature. The Bill Morris Book and Media Evaluation Seminar, held at the ALA Midwinter Meeting, and Breakfast with Bill, held at the ALSC Institute in alternating years, are supported by this endowment.
Award: In addition to supporting the events noted above, the Fund provides a $200 stipend for selected attendees to defray hotel and other expenses for the Bill Morris Seminar.
Website: http://www.ala.org/alsc/william-c-morris-endowment-activities

Founded: 1982
Benefactor: The ALSC Board and various members.
Purpose: Enhancement of the quality of the ALSC President’s Program.
Past events: ALSC President Ellen Riordan’s 2015 President’s Program brought Melissa Sweet and Judy Cheatham to speak about, “More to the Core: From the Craft of Nonfiction to the Expertise in the Stacks.”
Website: http://www.ala.org/alsc/aboutalsc/coms/pg4orgsupport/als-charoll

Founded: 2000
Benefactor: The ALSC Board.
Purpose: To support the administration of the Laura Ingalls Wilder Award.
Award: A bronze medal, honors an author or illustrator whose books, published in the United States, have made, over a period of years, a substantial and lasting contribution to literature for children. The award is given annually.
Past recipients: The first Wilder Award was presented to Wilder herself in 1954; Donald Crews received the Award in 2015.
Website: http://www.ala.org/alsc/awardsgrants/bookmedia/wildermedal

Founded: 1989
Benefactor: The Carnegie Corporation of New York as part of the Carnegie Video for Youth grant.
Purpose: To establish and endow the Andrew Carnegie Medal for Excellence in Children’s Video.
Award: The Carnegie Medal is presented annually to an American producer for the outstanding video production for children released in the United States in the previous calendar year.
Past recipients: Weston Woods (most recently 2015), Katja Torneman (2013), Aviator Films/Hyperion Studio (2002), What a Gal Productions (1997)
Website: http://www.ala.org/alsc/awardsgrants/bookmedia/carnegiemedal

Founded: 2009
Benefactor: Carole D. and Stan Fiore
Purpose: To enhance leadership development with ALSC by offering activities to develop members who have an interest in and commitment to the American Library Association and ALSC as future leaders.
Award: None to date, while the principal builds. We expect to award the first leadership activity to take place in 2016.