For the last few weeks, the crickets in Philadelphia have begun playing at night. This is the signal for the end of Summer Reading, the time to begin planning back-to-school visits, and the time to start planning a haunted house.

Haunted houses can be easily created, relatively inexpensive, and a fantastic draw that remind community members that the library is vibrant and exciting. They can also be nightmares for staff and patrons if they’re not planned and executed properly. A “well-planned” haunted house does not have to be an “expensive” haunted house.

Floorplans are your friends

The first time I created a haunted house for my branch, I was at a location that had a very large meeting room. This was a blessing and a curse because we had room to do things… and we also had room to fill. Because the neighborhood was excited for the event, I had to plan it out properly. Thankfully, I had a fantastic security guard, Dan Ross, who loved the idea as much as I did.

Dan and I created a simple floor plan of our meeting room space to guide us while we brainstormed. The floorplan gave us a bird’s eye view of the room, which allowed us to see where volunteers would be located, how evenly the scares were spaced apart and where problematic areas might exist. Because we knew that the room would be dark, we needed to eliminate as many “blind spots” as possible. Here is the floor plan from our second year: 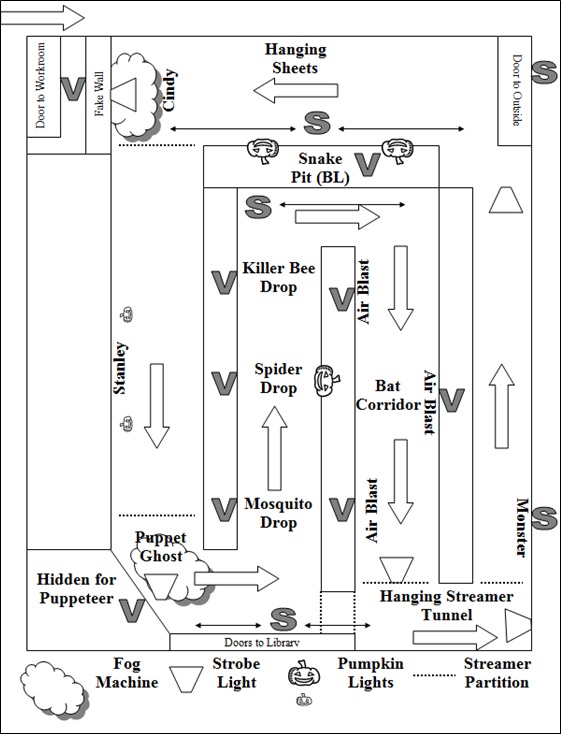 Sitting down for 30 minutes and planning saved countless hours of moving and adjusting plans. It also allowed us to know how many volunteers and staff members we would need to operate the gags and keep an eye on the tweens and teens entering the haunted house.

As Dan and I planned, we knew we needed outside advice. Thankfully, Philadelphia has a very active and highly dedicated staff of Children’s Librarians who are always willing to offer advice and support. Librarians who had been running haunted houses for years offered advice. We reduced the group size patrons in the haunted house from five to three. We also had staff members guide the groups. Usually the after school leader or I would walk with the groups to create a “safe” person if things became too scary.

We also went online to various websites to ask advice from professionals and amateurs who ran their own haunted houses. Here are a few places I visited and sought advice:

In later years, I also started following Halloween-enthusiasts on Pinterest. This was also a great resource for easy DIY projects. 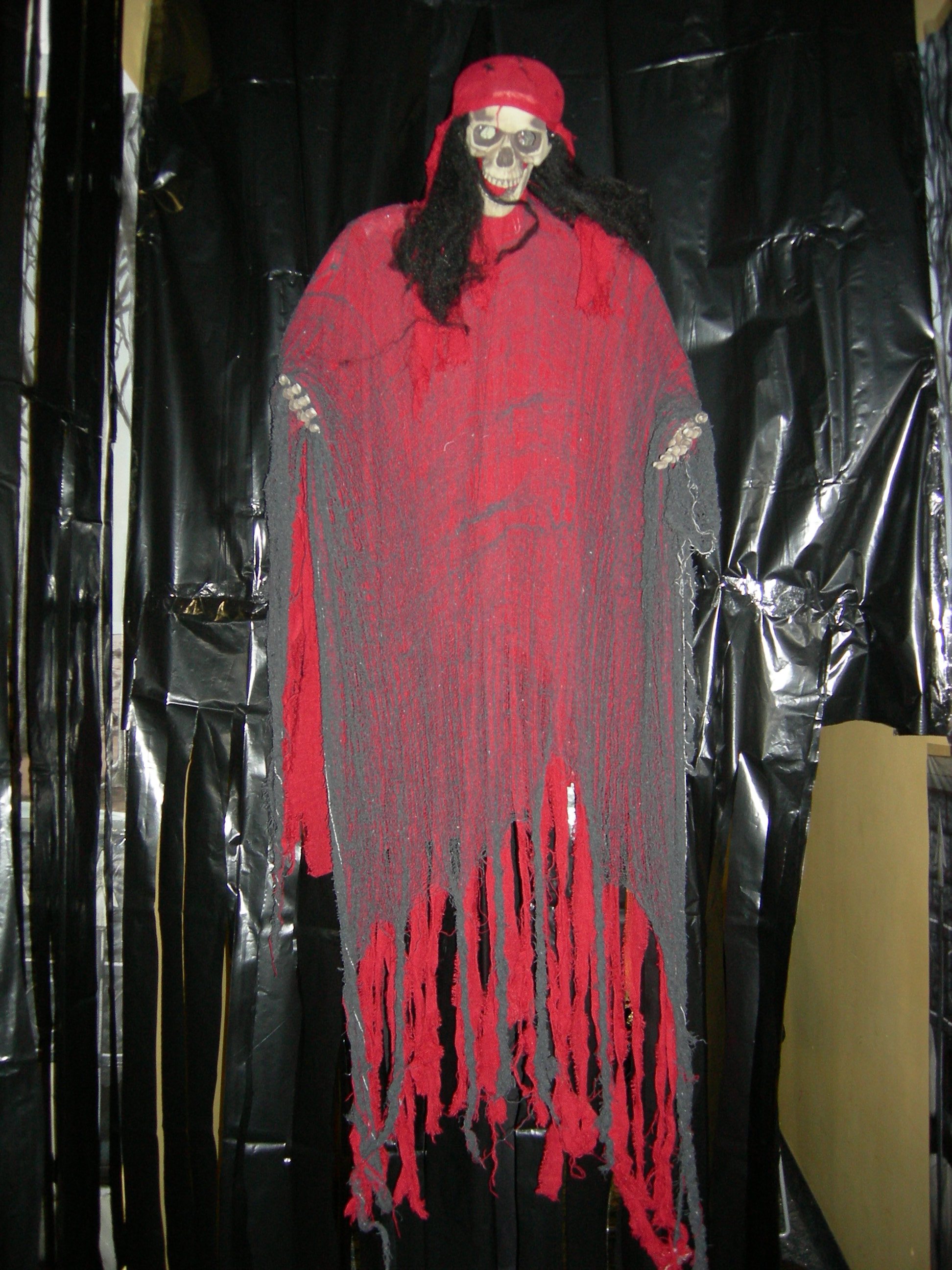 An early suggestion from a haunted house forum became one of our favorite scares. A ghoul on a broom handle “flew out” from behind a fake wall, while the volunteer lowering her screamed. We named the ghoul Cindy, and she’s been in every haunted house since.

I began canvasing for volunteers at the beginning of the school year and insisted on speaking with parents or guardians before event set-up began. Because the holiday is not celebrated by everyone, I wanted to ensure that parents knew exactly what the eager teens were volunteering to do.

All volunteers were told that secrecy was paramount to the success of the haunted house. They could tell as many lies about what was going to happen as they liked, but they couldn’t reveal any of the actual scares.

Sure, there are only five senses normally – Aliki’s My Five Senses didn’t lie to you. But when it comes to haunted houses, there are really six. The thing that separates an okay haunted house from an excellent haunted house is the sense of anticipation. The feeling of “something is about to happen” needs to always be present to make your haunted house memorable. No matter what your budget, this can be obtained. A dark room and a few strobe lights will do it.

An effective scare can be created with dollar store bats spray-painted with neon colors and hung near a black light. We “upped” the scare value in later years by hiding volunteers behind fake walls. Each volunteer had a can of condensed air that they would use to move the bats. As people walk past, the back of their head would also be sprayed with air. One bat attached to a black pole provided additional movement. 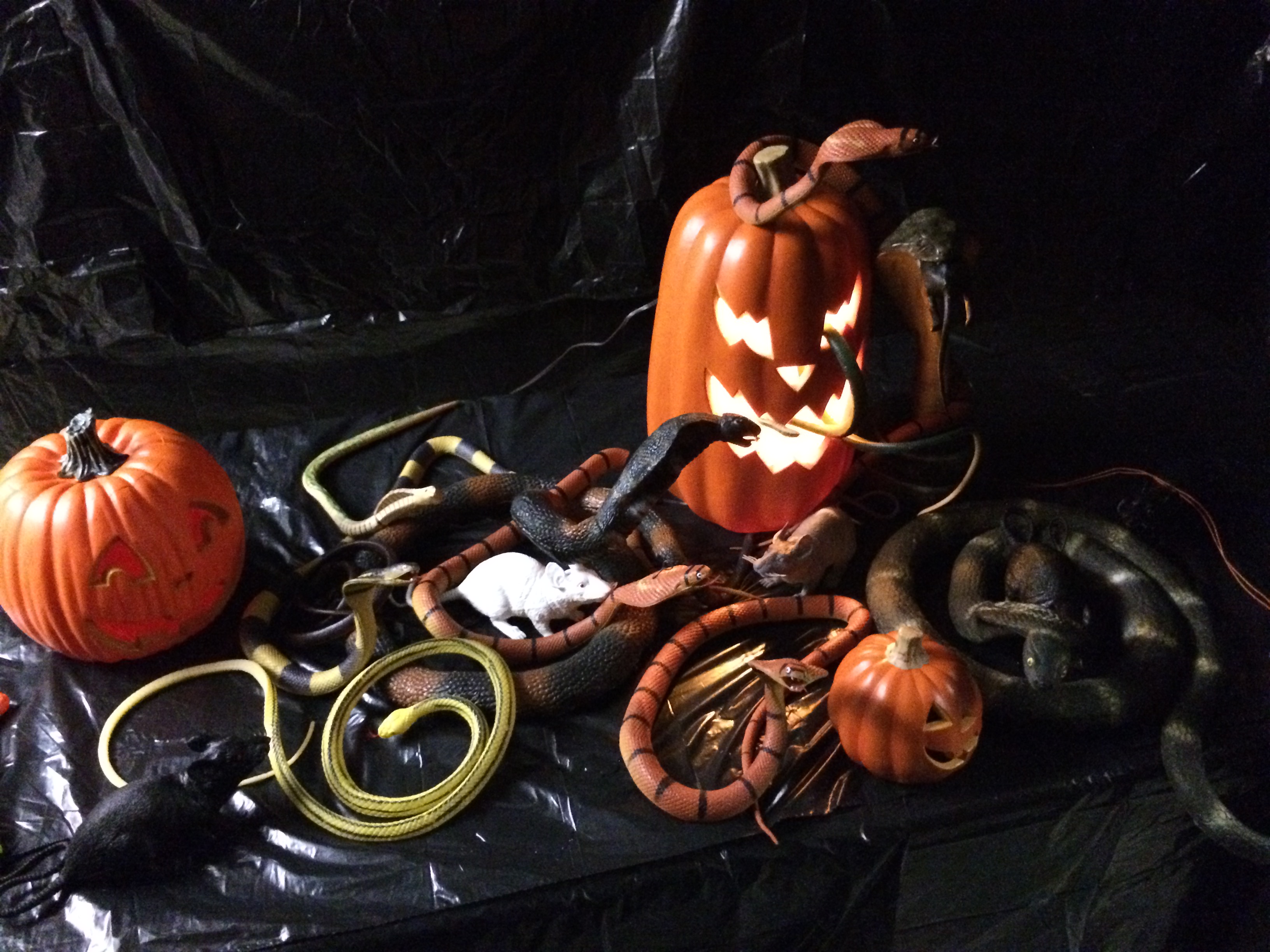 Another easy scare involved dollar store water guns. Volunteers dressed in all black hid behind a table full of rubber snakes. As groups of patrons walked through with a guide, they were told that they snakes did not bite, but they occasionally spit. This phrase was the cue for the volunteers to squirt patrons in the face with water.

Speed is the key to success

The first year we ran our haunted house, over 300 people from our neighborhood came. We allotted an hour and a half for the program, but thankfully volunteers stayed until everyone was able to go through once. We quickly realized that future haunted houses would require speedy walk-throughs. Some of our great scares like the Witch’s Sarcophagus had to be dropped because they took too long. 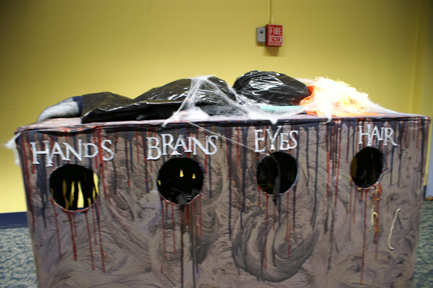 The Witch’s Sarcophagus was a staff favorite and we were sorry to see it go. Starting on the right, patrons reached inside each opening of the sarcophagus. Her hair was oily angel hair pasta, the eyes were peeled grapes, and the brains were gelatin and cottage cheese. A volunteer hid inside and grabbed patrons when they reached into the “Hands.” As sorry as we were to see this go, we knew this was better themed for a program and not a haunted house.

Our goal was to get a person through the haunted house in less than 3 minutes. We also limited the number of times a person could enter the haunted house. By a third trip, many ‘tweens knew where the scares were coming from – and tried to scare the volunteers back. Obviously, this is problematic, so everyone could enter two times only. After the first visit, everyone’s right hand was stamped. After the second visit, the left hand was stamped. Once someone had two stamps, they knew they could not enter the house again.

Inexpensive is not the same as cheap

When Dan and I first started the haunted house program, we had a budget of $100 from our friends group. Because the budget was small, we had to improvise. We created fake walls by hanging black garbage bags connected with shipping tape from the ceiling. We’ve used the wall design every year since. They are easily assembled by volunteers, can be reused, and they ripple slightly when people walked. They created the perfect ambiance for the house. 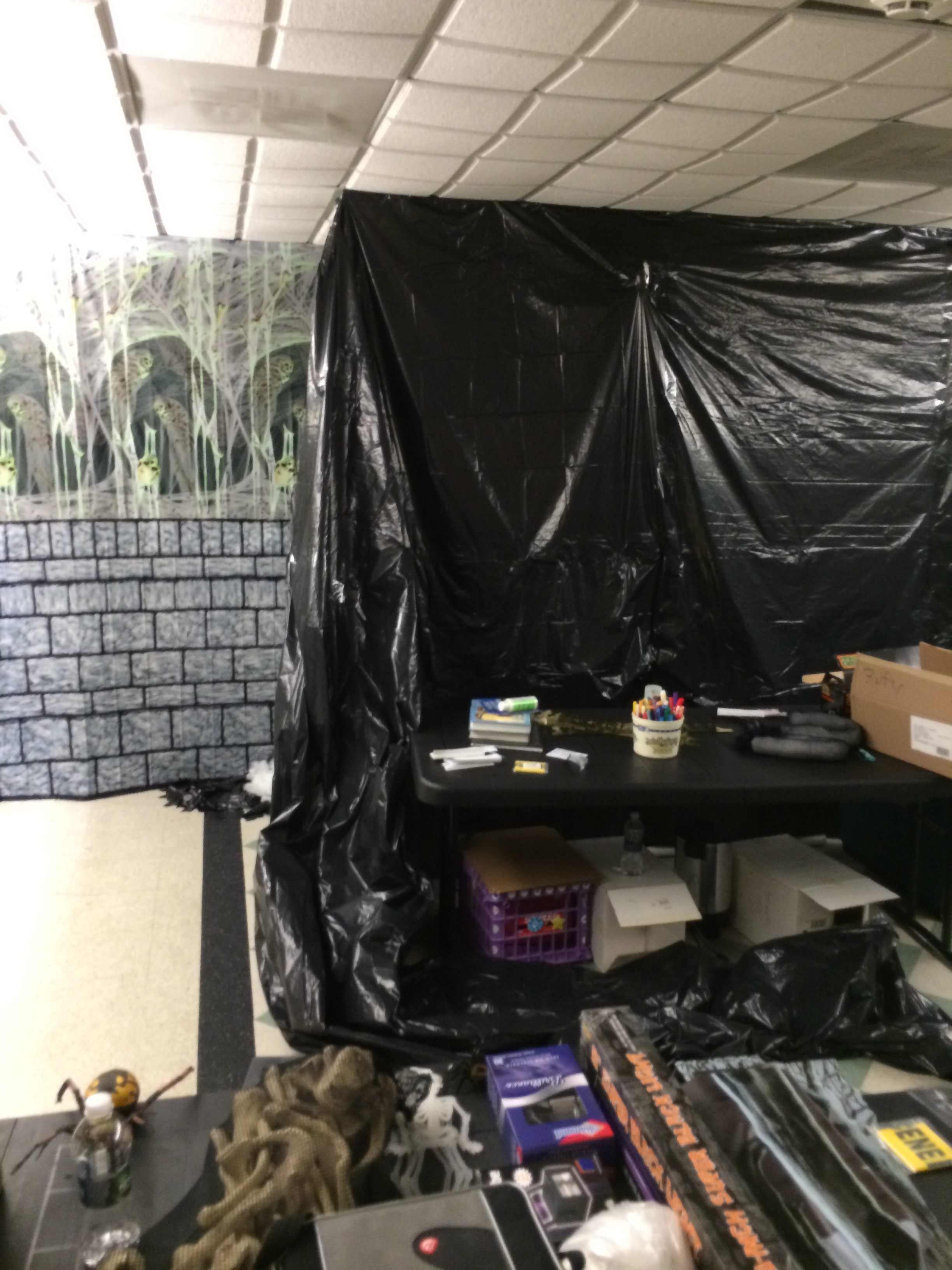 The room looked chaotic during set-up, but there was a system in place. Our other big purchases the first year were strobe lights and a scary music soundtrack. If you use strobe lights or fog machines, always advertise it on all fliers and announcements so people with health concerns are aware of the effects. 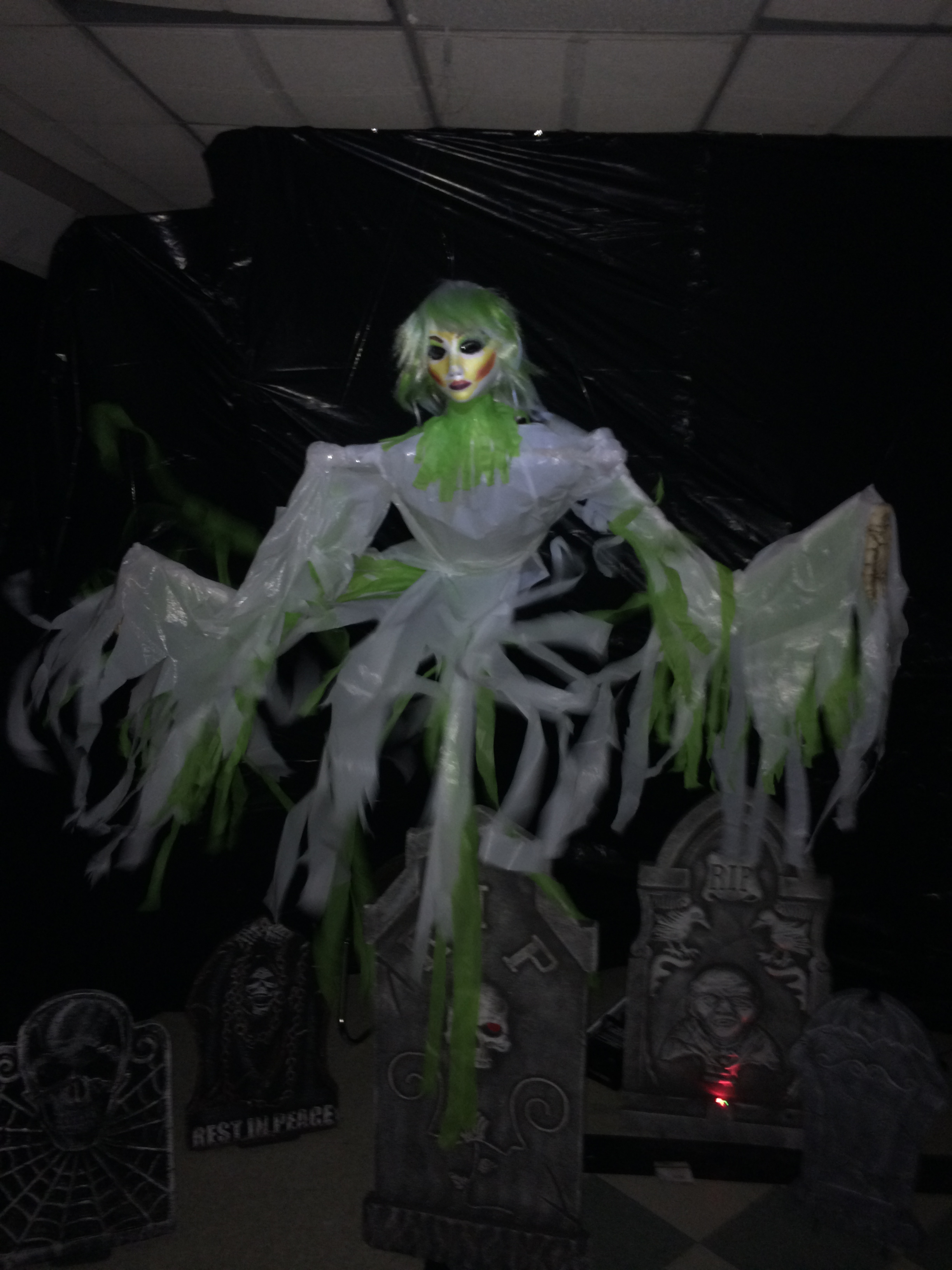 Items from around the branch were frequently repurposed for the haunted house. A desk fan hidden behind a tombstone powered Tiffani, our graveyard ghost. She was made from PVC tubing, garbage bags, plastic wrap and green plastic table cloths. A neighborhood wig shop donated the Styrofoam head, and a patron donated the wig (from an old Halloween costume.)

Advertising is your friend

Fliers advertising the Haunted House were distributed to the local schools in early October. Local businesses in our neighborhood were also asked to display fliers in their windows. When Dan and I began, we had an age limit. We dropped it in later years because many parents wanted to bring younger children through the haunted house. 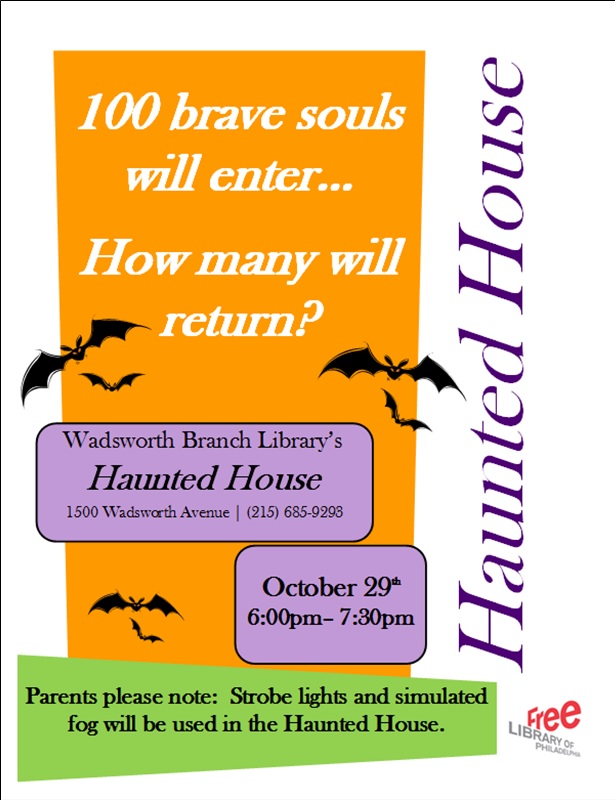 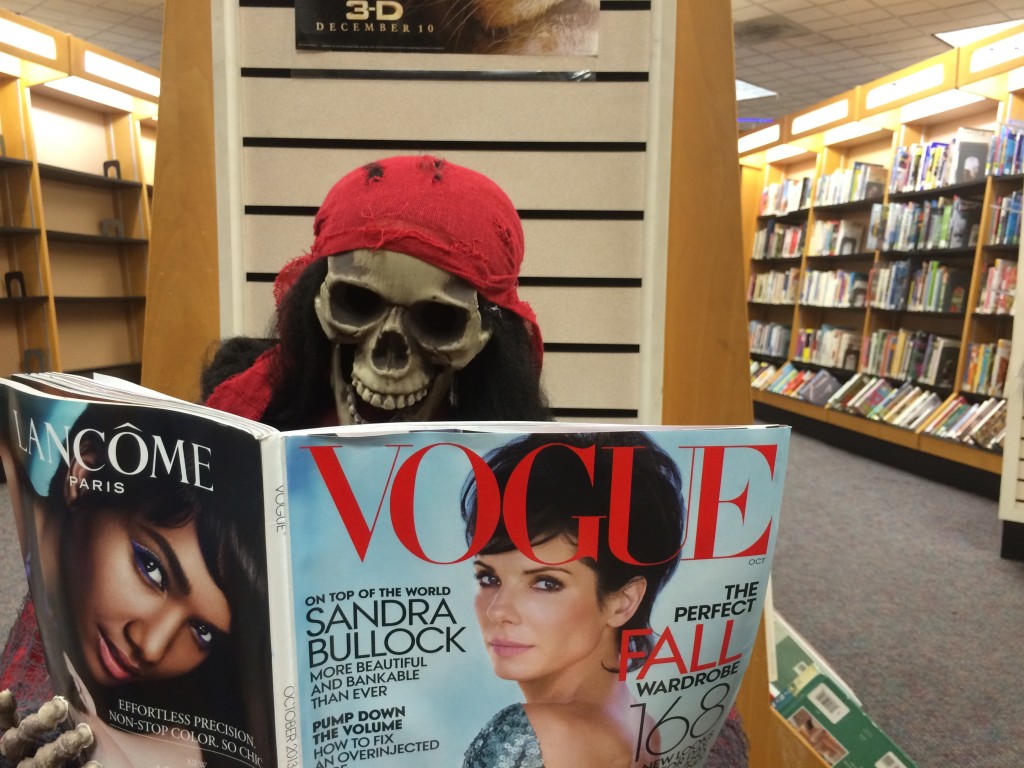 As wonderful as our advertisements are, a tween with a big mouth is worth 1,000 fliers. Let your ‘tweens know that you’re planning to scare the pants off of them, and they’ll let the entire neighborhood know.

Over the years, we collected items for the haunted house. After a roof leak, roofers left a large roll of clear plastic at our branch. We used it to create a corridor of shredded hanging sheets for people to walk through inside the haunted house.

Items from dollar stores, yard sales, and staff members’ house cleanings were used to enhance the atmosphere of the Haunted House. 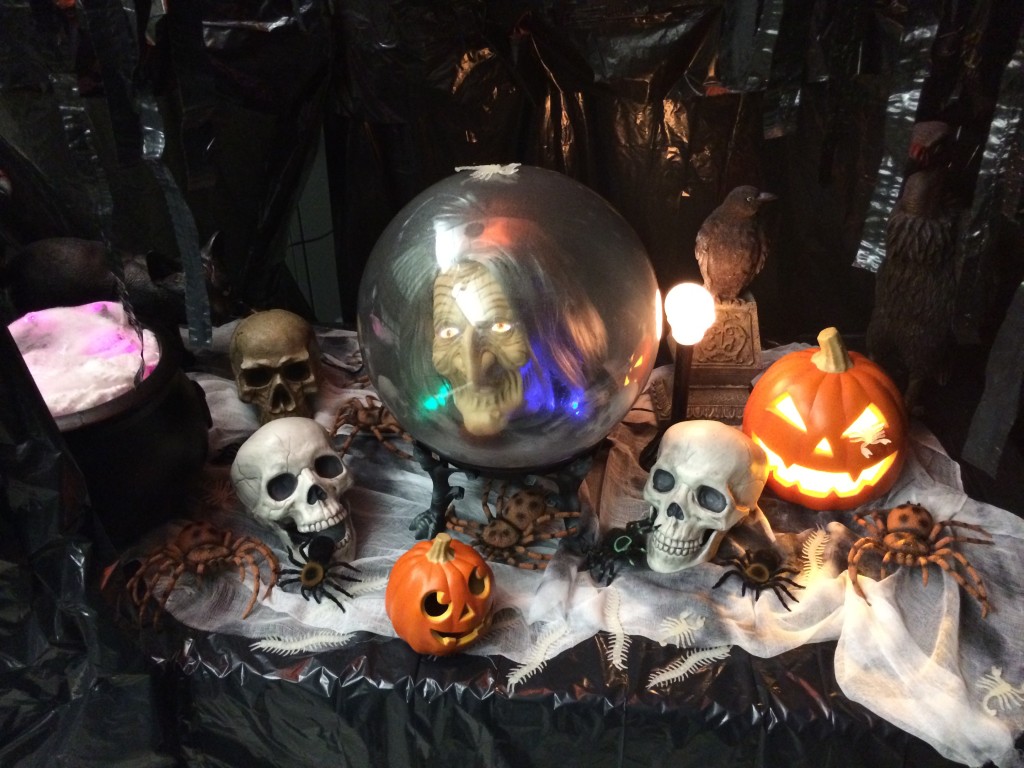 Taking a vacation day on November 1st and hitting local stores is a great way to find discounted Halloween Supplies.

I hope this inspires you to plan your own Haunted House. It takes some planning to run smoothly, but it was always my favorite program throughout the year. 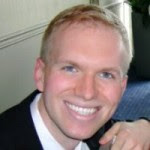 Christopher Brown is a the Curator of the Children’s Literature Research Collection at the Free Library of Philadelphia.  Chris is a  former Children’s Librarian, who served many communities in Philadelphia.  He received his MLIS from the University of Pittsburgh in 2005 and his MA from Memorial University of Newfoundland in 2013.  For more information about the Children’s Literature Research Collection, please visit us at http://libwww.freelibrary.org/collections/collectionDetail.cfm?id=3